US Dollar May Rise at Jackson Hole

The US Dollar may rise against its major counterparts if Jerome Powell, Chair of the Federal Reserve, disappoints dovish expectations. He will be speaking at the central bank’s annual economic policy symposium in Jackson Hole at 14:00 GMT later today. Fading expectations of a 50-basis point Fed rate cut in September, which are now at near-zero odds, offer an acute foreshadow of what could be to come.

As a reminder, in July the central bank offered a “mid-cycle” policy adjustment which was reiterated in this week’s FOMC meeting minutes. The Fed finds itself in a difficult spot where relatively solid local economic conditions – excluding manufacturing as of late – face a deteriorating global growth outlook. Trade spats with China have consumed markets with rising fears that a recession could hit the United States.

Concerns over the health of the global economy have been translating into unexpected monetary policy measures from various nations. A common theme they site are uncertainties over the US-China trade war. For example, earlier this month the Reserve Bank of New Zealand delivered a 50-basis point rate cut. Meanwhile, the Bank of Thailand offered a 25bps reduction when markets were anticipating no change.

On Thursday, we saw the Bank of Indonesia adhere to this global surprise cutting spree after benchmark lending rates were reduced by 25bps to 5.50%. That made it the second reduction in a row. Markets were expecting a hold at 5.75%. The central bank noted that their actions were preemptive to support growth. The Rupiah was little changed as the Bank of Indonesia said it would remain in the market to stabilize IDR.

Focusing on technical analysis, the USD/IDR weekly chart appears to be forming a medium-term bullish candlestick formation. This is marked by the Double Bottom that followed the top in October. The floor of the pattern appears to be just above support (13848 – 13923). Breaking above resistance (14482 – 14525) opens the door to revising last year’s highs (15231 – 15265). 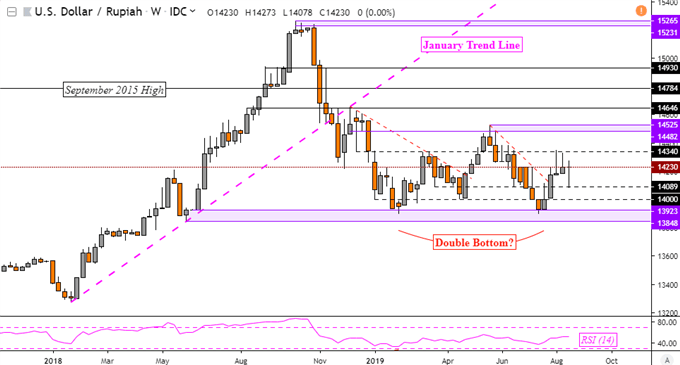 An escalation in US-China trade tensions also risks exacerbating capital outflows from emerging markets. Despite local easing, the MSCI Indonesia ETF and the Jakarta Composite Index ended the day to the downside. Looking at the former using a weekly chart below, the test of falling channel resistance from 2018 could pave the way for challenging rising support from 2015. 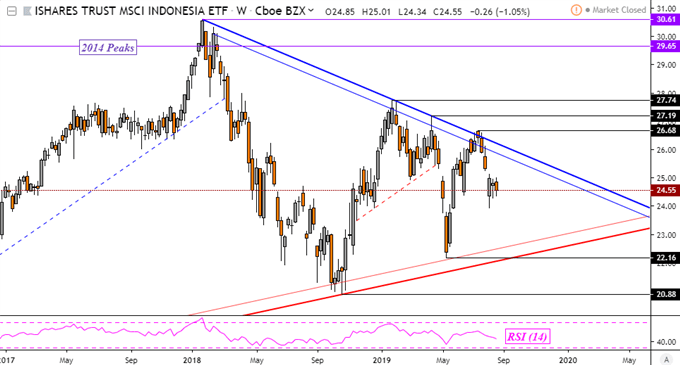