US Dollar May Rise Versus ASEAN FX. Fed, US-China Trade Talks Next

The US Dollar experienced its best week against its major counterparts – as anticipated – since the beginning of July. Fundamentally, gains in the Greenback were accompanied with a cautious deterioration in odds of a third rate cut from the Federal Reserve by year-end looking at Fed funds futures. US front-end government bond yields propelled higher, especially after a better-than-expected local 2Q GDP report.

This translated into broad gains against the Greenback’s ASEAN and South Asian peers such as the Singapore Dollar and Indian Rupee respectively. The former continues to see selling pressure in the aftermath of Singapore’s economy contracting by the most since 2012. This past week, USD/SGD also had to contend with domestic softer-than-expected headline CPI data, albeit core inflation was as expected.

Meanwhile, the Philippine Peso was rather resilient, ending little changed against the Greenback as USD/PHP struggles to find a direction on key rising support from 2013. Fundamentally, the PHP could thank Bruce Tolentino, a member of the Philippine Central Bank Monetary Board, for saying that there is “no rush” for them to cut interest rates. 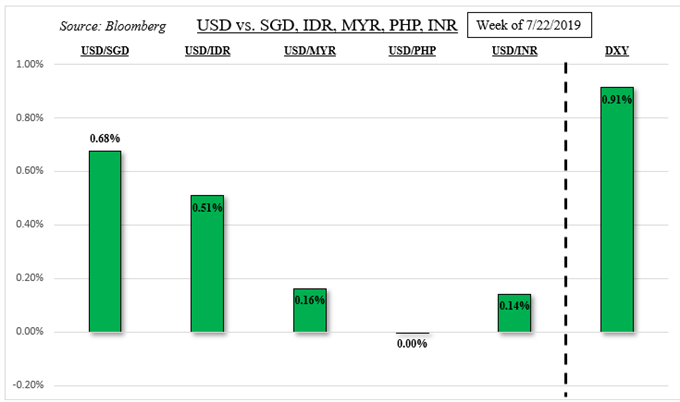 The Fed and US-China Trade Talks

Top-tier event risk for ASEAN FX, and most currencies against the US Dollar, is the July Federal Reserve rate decision. The central bank has been preparing markets for its first rate cut since 2008, back when the world plunged into a deep financial crisis. This also marks an end to its hiking cycle that contributed to the selloff in equities last year, particularly in emerging markets, as it unwound its balance sheet.

The optimism in major global stocks that we have seen this year has been in anticipation of this moment. Not only has US inflation slowed away from the central bank’s target, but also fears of the impact of trade wars on world GDP has dampened business sentiment. Lower interest rates from the world’s largest economy can help cool concerns around developing economies who have built up USD-denominated debt.

As we look towards the end of the year, the question comes down to how dovish the central bank will be relative to expectations. Odds of a 50 basis point rate cut are still not 100% off the table for this week. Needless to say, such an outcome is highly unlikely. What is interesting is that data from the US has actually been crossing the wires less soft than economists’ expectations looking at the next chart below.

If this pattern continues, the central bank may even find scope to soften its dovish outlook. Not only can that bode well for the US Dollar from a yield perspective, but also from a safe haven standpoint if this causes risk aversion similar to 2018. Odds of a third rate cut by year-end have cautiously declined these past few weeks and if this trend continues, we may see investors decrease excess risk exposure and priorities 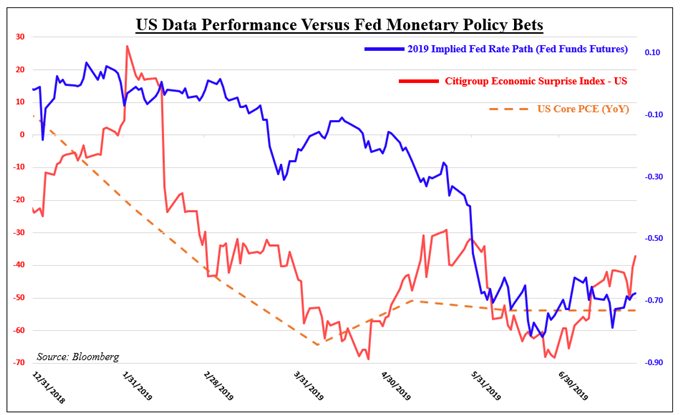 On the other hand, uncertainties around US-China trade wars may remain an overhang for markets in the medium-term. On Friday, US President Donald Trump said that he thinks China could wait until the 2020 United States Election for a trade agreement as the two nations appear to be in a truce. Donald Trump did say that he could impose more tariffs against China if he wants, undermining their stalemate.

With that in mind, ASEAN FX will likely also be awaiting upcoming talks between the world’s largest economies on Tuesday. US Trade Representative Robert Lighthizer and his colleagues are going to Shanghai to discuss where the two nations are since Trump withheld from raising an additional 325b in tariffs against China.

Speaking of China, we will get July manufacturing and non-manufacturing PMI data. Manufacturing is anticipated to contract for a third month in a row, though at a slower pace than in June (49.6 expected versus 49.4 prior). This also follows the weakest pace of GDP since at least 1992. Like in the US, data out of China has been tending to surprise less negative as of late.

US non-farm payrolls, in addition to the Fed and trade talks, may overshadow much of the impact of July Indonesian CPI data on the Rupiah. Especially if we see rising wage pressures from the United States. The Central Bank of Indonesia is closely watching the USD/IDR exchange rate as is and may step in if there is too much upward pressure.