USD/SGD May Reverse as Singapore Economy Contracts Most Since 2012

The SGD weakened after the latest GDP report showed that Singapore’s economy unexpectedly contracted by the most since 2012. The first estimate of second quarter GDP pointed to a 3.4 percent decline versus +0.5% anticipated and from +3.8% in the first quarter. Meanwhile, year-on-year GDP clocked in at just +0.1 percent which was the slowest pace of expansion since 2009. 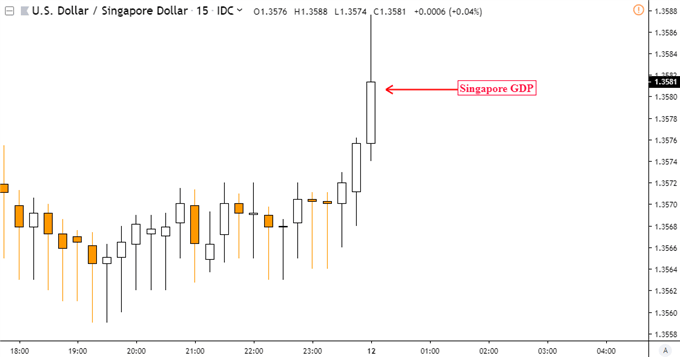 The details of the report revealed that industrial components of growth contracted. Manufacturing and construction declined 6.0 and 7.6 percent respectively (QoQ). Combining these two segments of the economy adds up to roughly 25% of overall GDP according to the Department of Statistics Singapore. Furthermore, there was also a 1.5% contraction in services.

According to estimates by Bloomberg, economists are anticipating growth of about 2.1% y/y in 2019. Today’s dismal readings undermine the outlook and puts the Monetary Authority of Singapore (MAS) in a tight spot. Looking at the chart below, headline CPI in the city-state has been steadily creeping higher. While the MAS revised CPI (all items) estimates lower, softer economic activity could also dampen headline inflation.

This places the focus on whether or not the monetary authority could continue its “gradual appreciation” of the Singapore Dollar Nominal Effective Exchange Rate (S$NEER). A stronger currency works to dampen rising price pressures. Meanwhile, the impact of the US-China trade war is quite noticeable given the sectors most hurt in today’s lackluster growth figures. It is unclear if the trade truce reached by the two nations may last. 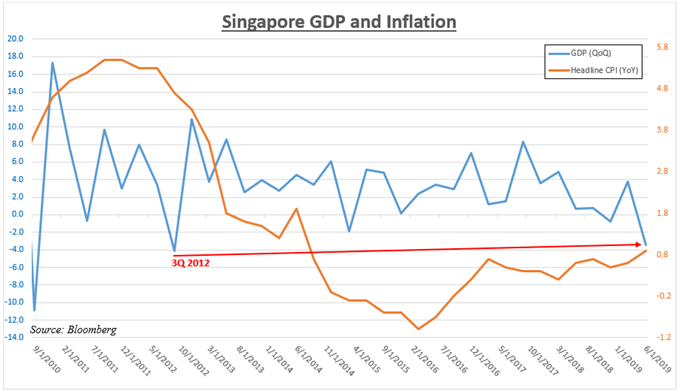 Below, USD/SGD finds itself oscillating between support at 1.3516 and resistance at the outer bound of 1.3624. This is while the dominant downtrend since late May struggles to remain intact. The falling trend line from then is currently being tested and clearing resistance opens the door to reversing USD/SGD’s decline.

Something to keep in mind of is SGD’s close relationship to the US Dollar, and if the MAS steps in to stem significant weakness in the Singapore Dollar given their policy stance. For more updates on the Singapore Dollar, you can follow me on Twitter here at @ddubrovskyFX. 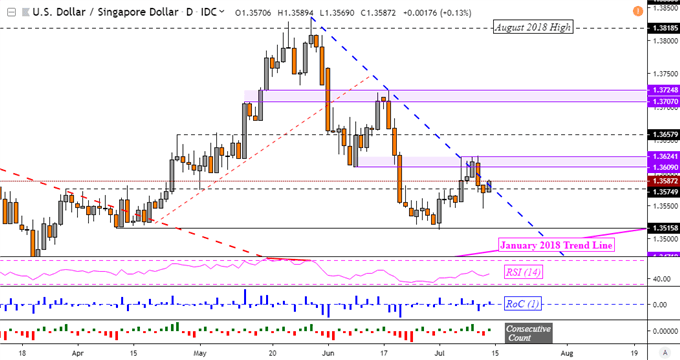