USD May Rise Versus SGD, INR as China Slows to Weakest Since 1992

The US Dollar underperformed against its major and most of its ASEAN counterparts this past week. Dovish testimony from Fed Chair Jerome Powell to Congress and the latest FOMC meeting minutes helped prepare markets for the highly-anticipated rate cut later this month. This is despite better-than-expected local CPI and PPI data which helped to cool some concerns about muted inflationary pressures.

A notable exception was the Indian Rupee which depreciated despite better-than-expected headline inflation data. Prices in India rose 3.18% y/y in June versus 3.13% anticipated which was the fastest pace since October 2018. What seemed to drive selling pressure in the currency was Subhash Chandra Garg - India’s Economic Affairs Secretary – who said that the fiscal deficit target for 2020 was higher at 3.55%.

Meanwhile, the Singapore Dollar briefly depreciated after Singapore’s economy unexpectedly contracted by the most since 2012, raising concerns over the outlook for domestic inflation. In Indonesia the Rupiah saw strength after President Jokowi announced plans for corporate tax cuts. This likely cooled Bank of Indonesia rate cut bets, though keep in mind that they are heavily intervening to guard IDR.

The Malaysian Ringgit focused on external developments more so than closer to home. The USD/MYR was little changed as the Central Bank of Malaysia left rates unchanged this past week. While Bank Negara Malaysia anticipates inflation to rise in the coming months as the impact of consumption taxes from 2018 lapses, they also mentioned that growth is subject to risks from worsening trade tensions. 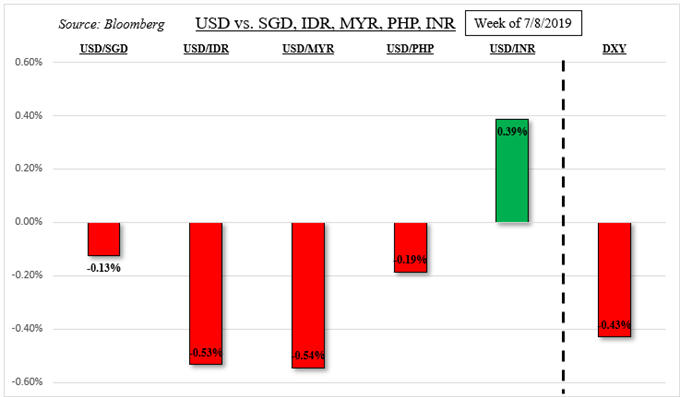 Ahead, top-tier scheduled event risk for the ASEAN region is second quarter growth data for China’s economy. Last week, we saw imports from the world’s second-largest economy contract over 7 percent in USD terms. This is more than the 4.6% estimated decline anticipated by economists and speaks to rising concerns about domestic demand in an economy that is shifting towards a consumer-oriented powerhouse.

Data results in China are still tending to disappoint relative to economists’ expectations according to Citigroup. This opens the door to a softer print in second quarter GDP which is already estimated to slow to 6.2% y/y from 6.4%. That is the weakest pace of expansion since at least 1992, and this could dampen growth prospects for some of its trading partners nearby such as Singapore, which is already struggling.

The Philippines, Malaysia, Indonesia and Singapore all have China as part of their top 5 trading partners. The former two countries have already cut interest rates at least once this year to help support economic activity. Something to keep in mind is that prospects of cheaper credit from the United States can alleviate financial pressure in emerging markets for the time being which may help counter frets over weak Chinese growth.

Later in the week, the Bank of Indonesia is expected to reduce its 7-day reverse repo rate from 6.00% to 5.75%. Though as mentioned earlier, corporate tax cuts could lessen the haste for policymakers to keep reducing rates. But what arguably matters the most for the Indonesian Rupiah is commentary on their FX target, which is 14,000 – 14,400 per USD this year. USD/IDR is hovering precariously at the lower bound.

As we saw this past week, relatively supportive US inflation data was not enough to deter aggressive easing bets from the Federal Reserve. According to Fed fund futures, there is still a roughly 20 percent chance of a 50 basis point cut at the end of this month. As such, absent significant surprises in upcoming local retail sales and sentiment data, the US Dollar may focus more on central bank commentary and risk trends.

Chair Jerome Powell is scheduled to speak at the Bank of France with commentary from policymakers spread out throughout the week. Markets will be closely watching for how aggressive the central bank may resort to easing in the months ahead. Keep in mind that 3 cuts by year-end are almost fully priced in by markets, even with inflation not too far off from the central bank’s target (core PCE is at 1.6% vs. 2.0%)

As such, if economic conditions continue to deteriorate in the world’s largest economy amidst the backdrop of trade wars and weak global growth, the US Dollar could catch a haven bid. The earnings season begins with banks reporting and they could fret about lower profit margins if interest rates fall too much. Concerns over trade wars may also be mentioned, which could dampen sentiment.