Not sure where Crude Oil is heading next? We recently released the third quarter Crude Oil fundamental and technical forecast !

Cautious odds of a 50 basis point cut from the Federal Reserve this month are back on the table after testimony from Chair Jerome Powell to Congress, and the impact on financial markets was noted. Such aggressive easing bets started getting priced out in the aftermath of the G20 Summit where we saw a US-China trade truce. This was compounded by last week’s better-than-expected US non-farm payrolls report.

Comments from Mr Powell to rekindle those expectations were more members seeing the case for easier policy and uncertainties dimming the outlook. This was further bolstered by the FOMC minutes from June’s interest rate announcement, paving the way for the first cut since 2008. This meant a disappointing session for the US Dollar as local bond yields tumbled and the S&P 500 rallied alongside anti-fiat gold prices.

While the latter two failed to achieve meaningful breakouts in their uptrends, one asset did and that was sentiment-linked crude oil. In addition to increasingly-dovish Fed bets, which could “fuel” demand for the commodity down the road, the commodity also had the latest inventory report to look forward to from the EIA. Stockpiles unexpectedly shrunk 9.5m b/d, adding to supply concerns as US-Iran tensions heat up.

Crude oil prices closed above a falling trend line going back to late April, marked as the blue line on the chart below. Prices also ended beyond the late June highs, closing at the highest since May. With technical analysis, confirmation is key, and a push above next resistance at 60.26 may open the door to revisiting April highs. Meanwhile, rising support may keep the uptrend intact, which is the red-dashed line below. 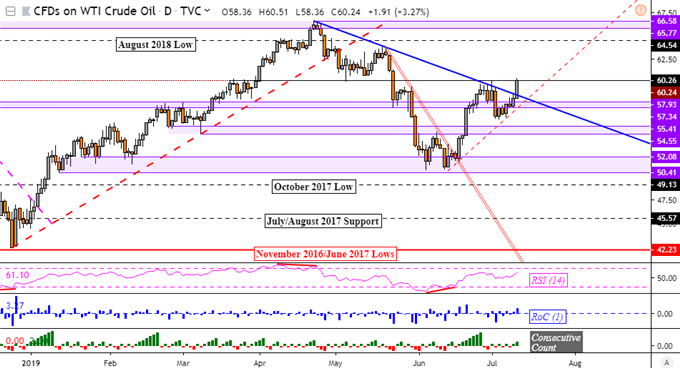 However, S&P 500 futures are little changed as we head into Thursday, which could limit gains in Asia Pacific markets ahead. The USD could continue succumbing to selling pressure in the near-term as the immediate focus is on easing from the central bank that oversees the world’s largest economy, and that will likely resonate into global financial markets. The AUD/USD and NZD/USD may rally in the near-term.

Down the road, the prospects for sentiment are not as straight forward. For one thing, a reversal in the central bank’s hiking cycle speaks to growing concerns about the health and vigor of the world’s largest economy. Meanwhile, as one trade war pauses, more seem to keep opening on other fronts such as in Europe and India. The USTR is investigating French plans to tax tech giants, this may lead to sanctions and tariffs. 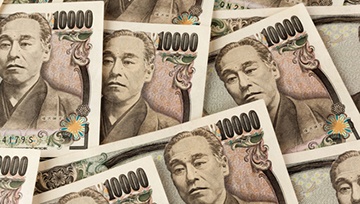