The US Dollar, despite gaining ground against some of its major counterparts these past few days, is losing momentum against the Philippine Peso as markets head into the final days of the week. During Thursday’s Asia Pacific trading session, Bruce Tolentino, one of the seven members of the Philippine Central Bank Monetary Board, said that there is “no rush” to cut rates.

Last month, we saw USD/PHP extend declines after the BSP unexpectedly held rates unchanged at 4.5 percent. This was after a cut in May alongside reductions in bank reserve ratios, both aimed at helping to support the economy as GDP unexpectedly slowed to its weakest since 2015 during the first quarter. Meanwhile, domestic inflation has been trending lower since 2018.

Bruce Tolentino added that “the data will tell the story moving forward”. On Tuesday, BSP’s Governor Benjamin Diokno also mentioned that further easing depends on how strong growth is. This translates into heightened volatility risk for the Philippine Peso on how data outcomes perform in the weeks and months ahead as markets balance odds of cheaper capital down the road.

On August 6 we will get July’s Philippine headline inflation report, but more importantly in the near-term is the Federal Reserve interest rate announcement next week. While a rate cut is anticipated, circumstances that may uphold the case for more aggressive easing, such as a miss in local GDP on Friday, can fuel risk aversion and boost the highly-liquid US Dollar.

USD/PHP does find itself sitting right on a well-defined long-term rising support line going back to 2013. The pair struggled to break under it earlier this month and appears to be heading for another attempt. Near-term resistance appears to have held at 51.29 while extending declines places the focus on December 2017 highs at 50.79. 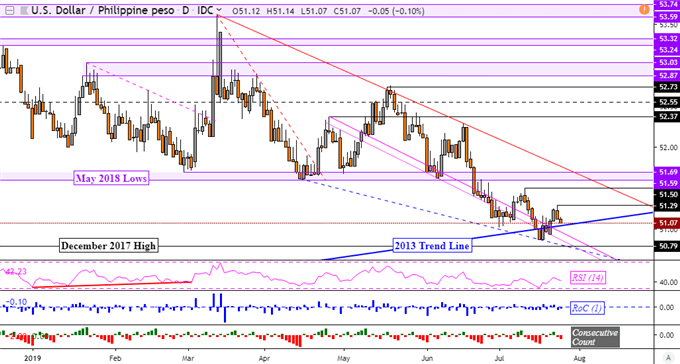