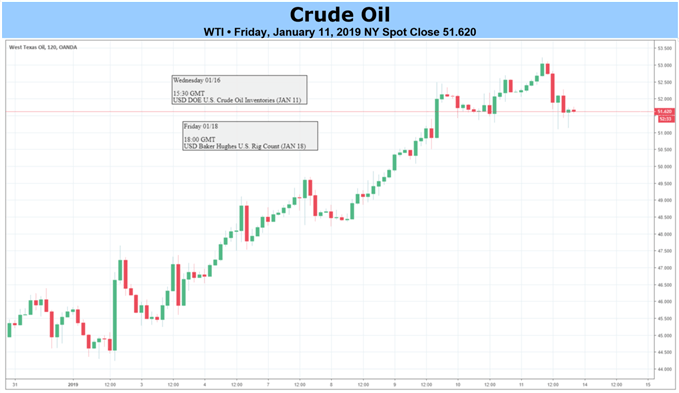 Crude oil prices extended gains as its winning streak approached its 9th day last week, the longest since February 2012. The sentiment-linked commodity reaped the benefits of improved market mood as the S&P 500 kept reversing losses after bottoming last month. The backdrop of optimism in financial markets seemed to have stemmed from US China trade talk hopes and an increasingly cautious Fed.

While the winning streak is impressive, it pales in comparison to the declines seen towards the end of 2018 where it tumbled about 45%. As the commodity traded into last Friday, it only stood just below mid-December highs. It would probably take major shifts in fundamentals to drive crude oil back to the highs seen last year, and that seems fanciful at this moment in time.

Disappointing data from China (a concern noted by Fed Chair Jerome Powell) undermines market optimism. The nation is the world’s second largest consumer of oil according to the EIA. The first is the US which is also seeing signs of slowing economic growth. Last week, Chinese auto sales fell by the most in a year in over two decades (-6%). Furthermore, slower domestic inflation hinted of more vulnerabilities.

Combining the two largest economies (and coincidentally the largest buyers of the commodity) with signs of economic weakness would be hurtful to the demand for oil. This is a setback that could potentially undermine efforts from OPEC and Russia to reduce supply to boost prices. Meanwhile, hopes of a clear outcome on US China trade talks faded towards the end of last week.

What may truly push crude oil prices higher in the long-run is a revival in global growth bets. Otherwise, near-term gains based on an increase in risk-taking because of reduced Fed rate hike bets could be in vain. The central bank is not necessarily taking hikes off the table and it depends on the outcome of economic news flow. The same can be said for China which is seeing some stimulus (tax cuts).

With that in mind, keep your eyes peeled for China trade and new Yuan loans data next week. Across the Pacific Ocean lies US retail sales, crude oil inventories and Fed speak. Then crossing the Atlantic leaves the monthly oil market report from OPEC and potential Brexit headaches if UK Prime Minister Theresa May losses her vote on her deal.

For more immediate updates on crude oil prices, breaking news and technical analysis, you may follow me on Twitter @ddubrovskyFX.