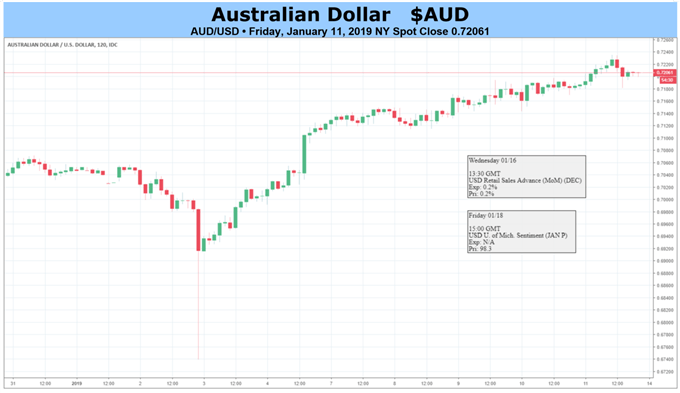 The Australian Dollar has started 2019 with a bit of strength against the US Dollar, but its position above last year’s dominant downtrend looks precarious for all that.

AUD/USD has logged eight straight sessions of gains since January 3, buoyed up by hopes for progress in trade talks between the US and China. It’s arguable that most countries have a strong interest in rapprochement between the world’s two largest economies, but Australia’s is clearly keener than most. The country has deep diplomatic and defense links with the US but relies on China to take its vast raw material exports. More practically, signs of a thaw in trade relations saw commodity prices gain, a sight which usually gives the Aussie a bit of support.

However, the coming week lacks such likely trading points as key economic data or major interest-rate decisions. That may very well leave the Australian Dollar more vulnerable than usual to overall market risk appetite, which is likely to be hostage to unpredictable trade headlines.

Those aside the Aussie’s position looks perhaps a little bleaker. Yes, the markets are rethinking the likely path of US interest-rate rises this year, but the Australian currency may not be able to capitalize on this. That’s because they’ve already rethought its likely interest rate support, too, and concluded that it hasn’t got much.

Indeed, Australian rate futures markets are still moving to price in modest rate cuts over their eighteen-month forecast horizon. That puts them at odds with the Reserve Bank of Australia. The official position there is that the next move for the record-low 1.50% Official Cash Rate is still likely to be upward, even if it’s not coming soon.

The Australian Dollar can’t then hope for much support once interest-rate differentials replace trade at the forefront of currency trading action. However, it’s impossible to predict when that might be or, indeed, when trade headlines which could move the currency will come.

With that in mind it’s a neutral call this week, albeit with one eye on the downside. 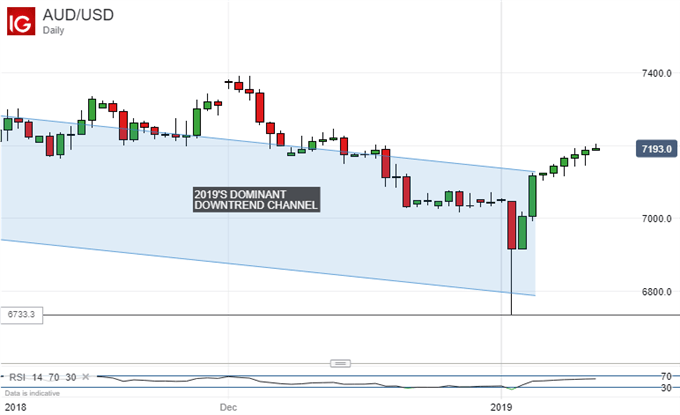