Despite general gains in the US Dollar last week, most ASEAN bloc currencies either stood their ground or made progress against the greenback. Particular outperformers were the Indonesian Rupiah and Philippine Peso. Meanwhile the Singapore Dollar fared a bit worse while the Malaysian Ringgit was mostly little changed.

USD/IDR was feeling downside pressure despite the local government cancelling remaining debt auctions for this year after improved revenue collections. In the past, IDR was supported by larger-than-expected bond auctions as it aided to reduce the money supply and bolstering the currency. However, the cancellations may bolster IDR if bond supply is limited and capital inflows from foreign ownership of local debt support the currency.

As anticipated, weakness in crude oil prices was accompanied with gains in the Philippine Peso. The commodity is a key import of the Philippines and lower prices can act as a deflationary force in a country where CPI is above the central bank’s price target. The USD/SGD initially brushed off the softest local GDP report in two years. 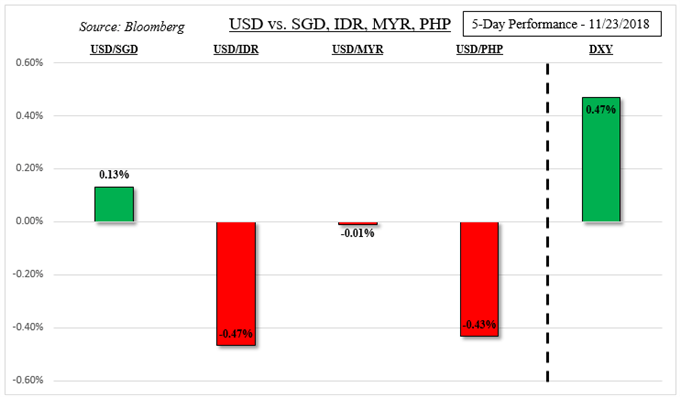 So far this week, the markets were off to a jubilant mood given G20 meeting optimism bets and reduced Italian budget fears. However, as Tuesday’s session got underway, US President Donald Trump revived US China trade war fears and casted a shadow over relationships with Mexico. This speaks to what is arguably the most important event risk for the ASEAN region and local currencies.

This is the G-20 Leaders’ Summit, and it comes during a week with a lack of prominent ASEAN economic event risk. On Friday and through the weekend, nation leaders will be discussing trade in Buenos Aires and investors/speculators alike will be eager to see where relationships between the world’s largest economies could go. Trade wars and Fed monetary policy tightening have been weighing on emerging markets this year.

Alas, given commentary from Mr. Trump, it seems as though the incoming Chinese import tariff rate increase to 25% seems increasingly likely. If the meeting ends in heightened tensions between the US and China, global benchmark stock indexes could be at risk. Should the US Dollar then gain on safe haven bids, we may see weakness in currencies such as SGD and PHP.

Aside from that, do keep an eye on the latest round of Chinese Manufacturing PMI data. China’s economy has slowed to its weakest pace of growth in just about a decade. Should this disappointment continue echoing into domestic data, further spelling weakness for the Asia/Pacific region, market mood may deteriorate.

Outside of the region, keep an eye for commentary from the Fed. We will receive speeches from Chair Jerome Powell, Vice Chairman Richard Clarida and various district presidents. The uptick in the US Dollar as of late has been accompanied with increased December Fed rate hike bets. But, according to Fed funds futures, those are still not fully priced in yet. Perhaps commentary may uphold those, boosting USD. This week’s FOMC minutes could also do the same for the greenback.