European equities gapped higher as the Euro Stoxx 50 finished the day by 1.13% to the upside. Then, the S&P 500 followed suit as it closed 1.55% higher. Wall Street was led higher by the FANG group, with Amazon up by 5.28% following the US Black Friday weekend. Market optimism was also seen in US Treasury yields and resulted in a steepening of the 2019 implied Fed rate path.

As a result, the haven-linked US Dollar, which initially fell during the first half of Monday’s session, trimmed its losses and ended cautiously higher. Meanwhile, the anti-risk Japanese Yen paused its descent as gains in US equities were somewhat halted due to increased Fed rate hike bets. With that in mind, we may see Tuesday’s APAC session begin on an upbeat, but gains could be restrained.

This is because towards the end of Monday’s session, Mr. Trump offered worrying announcements in regards to Chinese import tariffs ahead of this week’s G20 Summit in Argentina. It looks like an increase in the tariff rate is still on the table come 2019. He also added that an additional $267b in levies could be implemented should negotiations end on a sour note. This may offer a boost to JPY prices.

The New Zealand Dollar remains in a near-term downtrend after rising support was taken out last week. We still remain short NZD/USD from 0.6788 targeting 0.6501. The pair appears to be heading for the next support area which consists of the July lows between 0.66898 and 0.67141. Should this area fall apart, we could be heading for a resumption of the dominant downtrend seen from April to October. 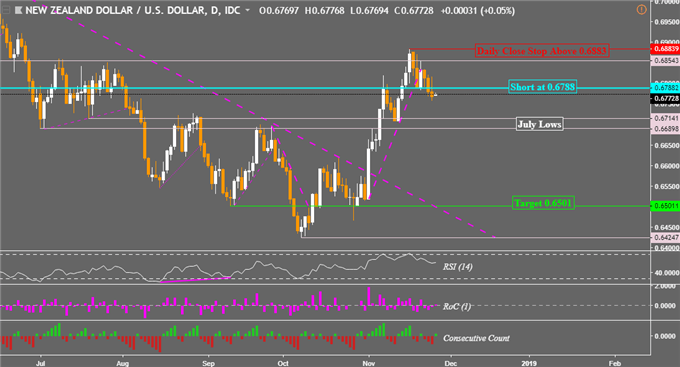