This past week, the US Dollar appreciated against its major counterparts following the 2018 US midterms and Fed rate decision. That loosely translated into gains against some of its ASEAN bloc currencies such as the Singapore Dollar and Malaysian Ringgit. The Federal Reserve increased rate hike bets, which helped send the S&P 500 lower on Friday and could have knock-on effects for risk trends and ASEAN FX next.

The Ringgit was perhaps particularly vulnerable after the Malaysian central bank left rates unchanged at 3.25% as expected. Bank Negara Malaysia added that the current rate ‘is consistent with the intended policy stance’, signaling that a hike may not be in the cards in the near-term. Indeed, local government bond yields fell in the aftermath indicating reduced hawkish bets.

The Indonesian Rupiah was particularly resilient this past week as USD/IDR plunged aggressively heading into the Fed rate decision. The Bank of Indonesia continued deploying efforts to stabilize its currency. Debt auctions exceeded targets with 20t Rupiah of bonds sold this past Tuesday, twice the goal. This helped to reduce the quantity supplied of money, aiding to drive the currency higher. But the Rupiah halted its appreciation conveniently on a rising trend line from January. 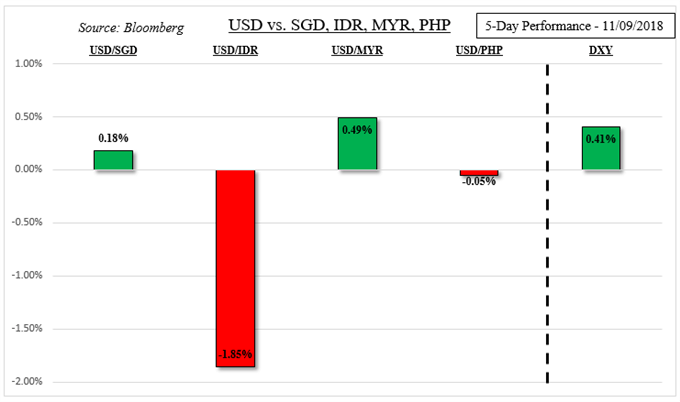 We have a couple more central bank rate decisions on Thursday. Bangko Sentral ng Pilipinas (BSP) is expected to leave the overnight borrowing rate unchanged at 4.50%. Markets will be gauging if we could get another hike by the end of this year, as such their forward guidance will be carefully watched. Philippine CPI surprised to the upside in October, but it was in line with September’s inflation rate at 6.7% y/y. Meanwhile, PHP has been gaining ground against USD in recent weeks, lowering the urgency to keep it afloat.

Then, at an unspecified time on the same day, the Bank of Indonesia interest rate decision will cross the wires. Like the BSP, the central bank is anticipated to hold its seven day reverse repo rate unchanged at 5.75%. Indonesia’s central bank also has the relief that its currency has appreciated against the US Dollar in recent weeks, perhaps lowering the scope for it to rush raising rates again soon. Indonesian inflation also remains within the central bank’s target of a 2.5 – 4.5% range.

As such, the focus for the Philippine Peso and Indonesian Rupiah may shift to external developments. In regards to this aspect, market mood could deteriorate again soon and this risks sending ASEAN FX depreciating again. Last Thursday, the S&P 500 dropped bearish reversal warning signs which saw confirmation the following day.

With the Fed reiterating its hawkish tone last week, the central bank is still on pace to raise rates again in December. This is despite aggressive selloffs in global stock markets in October. As such, we may see Wall Street and the MSCI Emerging Markets Index resume their downtrends. The US Dollar may gain on safe haven bids as a result, pressuring the Singapore Dollar and Malaysian Ringgit lower. 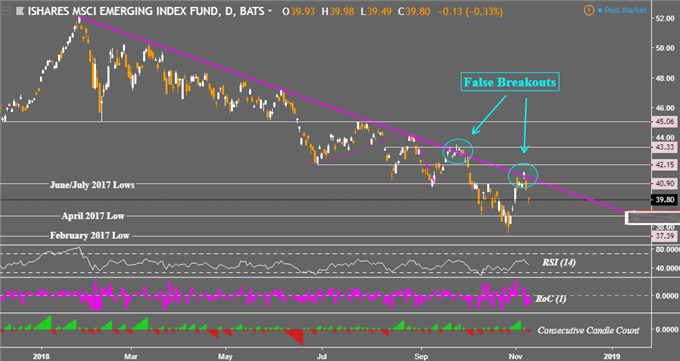 From a more fundamental perspective, keep a close eye on how US CPI unfolds this coming week. Local economic news flow has been tending to outperform relative to economists’ expectations, opening the door to an upside surprise. Meanwhile Fed Chair Jerome Powell is scheduled to talk about global economic issues on Wednesday and may uphold their rate outlook. Both of these may boost USD.