Canadian Dollar: What Every Trader Needs to Know

What is the Canadian Dollar?

The Canadian Dollar is the official currency of Canada. It is also sometimes informally referred to by traders as the “Loonie”. The name is in reference to the country’s indigenous bird, the common loon.

Canada’s first bank notes were introduced in 1817. The Canadian Pound was adopted in 1841, though it was never linked to the namesake British currency. In 1854, Canada introduced the gold standard. However, conversion to gold was suspended during WWI and fully discontinued in 1933.

In 1949, the Canadian Pound was supplanted by the Canadian Dollar. The following year, it became a free-floating currency until 1962, when a fixed exchange rate was introduced. It was liberated anew in 1970 and has remained so since.

In 1987, the Canadian one-dollar coin was introduced that bore an image of the common loon. It was nicknamed the “Loonie” and has come to be synonymous with the Canadian Dollar.

History of the Bank of Canada

In 1933, Prime Minister R.B. Bennet founded the Royal Commission on Banking and Currency. It later drew up a proposal to establish a central bank in Canada. Prior to the establishment of the Bank of Canada (BOC), the country’s biggest bank was the Bank of Montreal. It acted as a banker to the government while the Department of Finance was responsible for printing Canadian banknotes.

The BOC was chartered in 1934 under the Bank of Canada Act and was established as a privately owned corporation in order to ensure political indifference. In 1938, the bank was designated by Prime Minister Willian Lyon Mackenzie King as a federal Crown corporation.

The BOC was tasked with setting out Canada’s monetary policy and in 1944 became the sole issuer of the Canadian Dollar. Monetary decisions are made by a consensus vote of the Governing Council. It consists of the BOC Governor, Senior Deputy Governor, and four Deputy Governors.

Build confidence in your Canadian Dollar trading strategy with our free guide!

What moves the Canadian Dollar?

The BOC’s mandate is to keep inflation between 1-3% as a means of providing a stable price environment over the medium term. It sees a flexible exchange rate as instrumental in being able to achieve this, while also providing a “buffer” against internal and external economic shocks.

The central bank can use conventional policy instruments such as interest rate hikes and cuts as well as open market operations (among other monetary levers) to achieve its target. The BOC can also use non-standard policies such as Quantitative Easing (QE) that emerged after the 2008 global financial crisis and follow-on Great Recession.

The central bank also holds press conferences where markets can approximate the direction of interest rate hikes or cuts based on hawkish or dovish rhetoric from BOC officials. Additionally, indicators of economic activity such as GDP and CPI reports, along with PMI surveys, can have a noteworthy effect on the Canadian Dollar.

Unexpectedly positive or negative data from these various releases has a tendency to lead markets to speculate on potential hawkish or dovish shifts in BOC policy. Consequently, this speculation often leads to price fluctuations in the Canadian Dollar.

Effect of BOC Monetary Policy on the Canadian Dollar 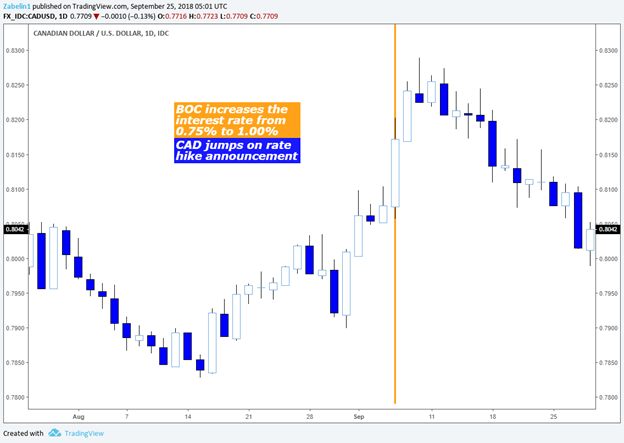 Canada is a major exporter of key natural resources, such as agricultural products, crude oil, lumber, and natural gas. That puts the country at the relative beginning of the global supply chain, which can make it especially sensitive to changes in the outlook for worldwide economic activity. In practice, this can mean the currency echoes swings in market-wide risk appetite, as reflected in benchmark stock indexes like the S&P 500.

Furthermore, Canada is the fourth largest supplier of petroleum in the world. To the extent that large swings in crude oil prices are seen as likely to influence Canada’s economic fortunes and influence BOC policy, such moves can be echoed in the currency.

III. Relationship with the United States

The US accounts for nearly 80 percent of Canadian exports. This means that changes in relations with the country’s southern neighbor can stoke substantial exchange rate volatility. For example, a 2017-18 push to renegotiate the seminal NAFTA free trade agreement by US President Donald Trump turned contentious, stoking uncertainty and weighing heavily on the currency.

Effect of metal tariffs on the CAD 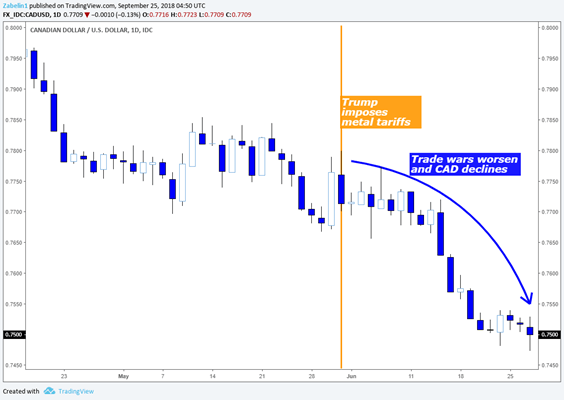 The Canadian Dollar is the seventh-most traded currency in the world, composing 5.1% of global market turnover (according to the Bank of International Settlements). USD/CAD – the Canadian Dollar’s pairing with the US Dollar – is the sixth most traded currency cross globally. This speaks to relatively abundant liquidity, which often implies comparatively lower transaction costs and higher-quality trade execution.

Canada’s close economic relations with the US means that traders can use the Canadian Dollar as a vehicle to gain indirect exposure to key developments in the world’s largest economy. It can sometimes also offer a gateway to the oil market, although such correlations wax and wane over time and do not imply a causal relationship between currency and commodity prices.