British Pound: What Every Trader Needs to Know

What is the British Pound?

The Pound Sterling, abbreviated as GBP for “Great British Pound”, is the official currency of the United Kingdom. It is the world’s oldest currency that is still in use. Its name derives from the Latin word “libra”, meaning “pound”, and is denoted as £.

The first use of the pound can be traced back to 775 AD, when silver pennies were the main currency in the Anglo-Saxon kingdoms. Prior to the use of the decimal system, the pound’s value was equal to 240 sterling silver pennies, which was equivalent to one pound of silver. In 928, the pound was made the official currency of Anglo-Saxon England. In 1717, the United Kingdom moved away from silver and re-defined their currency’s value in terms of gold.

History of the Bank of England

In 1694, the Bank of England (BoE) was established. It is the world’s second-oldest central bank. It was established as a way to fund the military effort during the Nine Years’ War and was initially created as a private entity that functioned as a banker to the government.

In 1844, the passage of the Bank Charter Act gave the BoE a monopoly on issuing the pound and limited the power of other British banks. In 1914, the conversion of the pound into gold was suspended in order to support the UK’s military efforts during the First World War. The pound officially came off the gold standard in 1931.

In 1946, the BoE was officially nationalized. In 1979, exchange rate controls on the pound were lifted, and it was allowed for the first time to float as a fiat currency on the market.

Build confidence in your British Pound trading strategy with our free guide!

What moves the British Pound?

The BoE’s mandate is to maintain monetary and financial stability. To achieve these objectives, it aims for an inflation target of 2 percent. The central bank can use conventional policy instruments such as interest rate hikes and cuts, open market operations and other monetary levers to achieve this objective. The BoE can also use non-standard policies such as quantitative easing (QE) and asset purchase programs that emerged after the subprime mortgage crisis in 2008.

The central bank also releases minutes from meetings of the policy-setting MPC committee, publishes a quarterly Inflation Report and holds press conferences. These allow markets to approximate the direction of interest rates based on “hawkish” or “dovish” rhetoric from BoE officials. Additionally, indicators of economic activity such as GDP and CPI reports, along with PMI surveys, have a noteworthy effect on the pound by way of shaping BoE policy expectations.

Unexpectedly positive or negative data from these various indices has a tendency to lead markets to speculate on potential hawkish or dovish shifts in policy from the BoE. Consequently, this market-driven speculation often leads to price fluctuations in the pound.

Political instability risk has played an increasingly significant role in influencing the British Pound price trend since 2016. On June 23 of that year, the UK voted in a national referendum to withdraw from the European Union, which has come to be known as “Brexit”. The deadline for the separation is March 2019 and negotiations about what the subsequent UK/EU relationship will look like are ongoing in the interim.

Due to uncertainty about Brexit’s impact on UK economic growth and monetary policy, the pound plummeted to a 30-year low in the referendum’s immediate aftermath. Globally, vote marked an adverse turn in market sentiment, causing stock market indices to drop. Share prices and the UK unit bounced back up as initial market panic eased but the episode illustrates what might happen were negotiations to struggle or founder altogether. 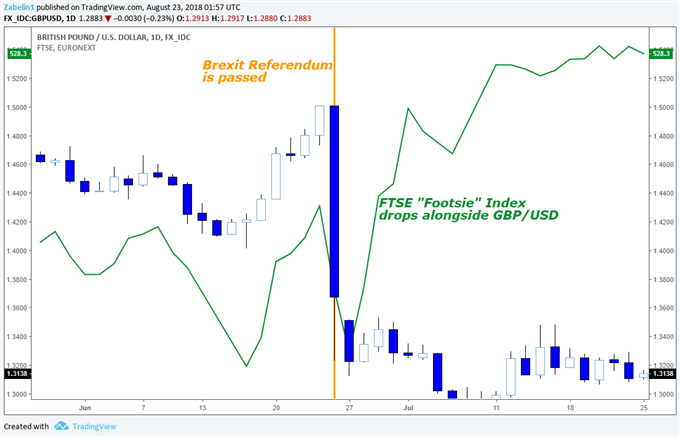 GBP is the fourth-most traded currency in the world, composing 12% of global market turnover (according to the Bank of International Settlements). It also serves as the third-most held reserve currency. GBP/USD – Sterling’s pairing with the US Dollar – is the third most traded currency cross globally. Widespread use speaks to abundant liquidity, which often implies relatively lower transaction costs and higher-quality trade execution.

The UK’s geographical proximity to and close economic ties with continental Europe can sometimes see the pound function as a regional alternative to the euro. That can translate into an outsized response at times of institutional stress within the Eurozone. It also means the pound can be a way for investors to have exposure to the European economy without taking on euro-specific risk.

The pound is also something of a gateway to London, the largest financial center in Western Europe. Its moves can thus reflect capital flows in and out of this critical hub for global investors.