USD/SEK May Rise on Riksbank View. Political Breakthrough Ahead?

Sweden’s unprecedented political gridlock may have an end in sight…although a breakthrough is still highly unlikely. Annie Loof, head of the Center Party, was given the task of forming a coalition. She has just one week for the task, but if progress appears hopeful, there is a chance for an extension.

The gridlock has resulted in large part from the rise of the nationalist and neo-Nazi rooted Sweden Democrats Party (SD). From 2014-2018, 11% of the center-left Social Democrat support went to the SD’s. This likely stems from Sweden’s recent strain in social cohesion as a result of the migrant influx from 2015. Sweden has taken in the highest number of asylum seekers per capita out of the entire European Union.

Last week, Ulf Kristersson – leader of The Alliance coalition – was proposed by speaker of the Riksdag Andreas Norlen to be Prime Minister. He was ultimately voted down. This comes after he and the recently ousted PM Stefan Lofven – leader of the Social Democrats – failed to create their own respective coalitions.

Kristersson’s rejection came from within his own grouping. Loof joined other parties within The Alliance and voted Kristersson down, thereby fracturing the center-right bloc. The hope for her success likely stems from her party’s politically neutral stance – as is embedded in its name – which would allow for easier talks across the aisle. However, she has stated that under no circumstances will she cooperate with SD.

The rise of nationalist parties and their effect on political alliances and party policies have significant implications. The reshuffling of political parties is inextricably linked to a reformation of economic agendas that reflect the new alliances and coalitions. This in turn will affect economic activity and monetary.

The Riksbank – Sweden’s central bank – has recently cited the ongoing political gridlock as a factor in its monetary policy. Meanwhile, October’s disappointing inflation print (2.4% on-year vs. 2.5% expected) appeared to encourage a dovish shift in the markets’ rate hike outlook, with traders now looking for an increase in February rather than December.

USD/SEK in recent months has formed what looks to be a Rising Wedge, indicating bearish reversalpotential. Negative RSI divergence also signals that the pair might be topping out soon. Support established in the beginning of the year has been broken and a ceiling capping gains since mid-August appears to be pressuring prices downward. If the wedge floor at 9.0002 is broken on a daily closing basis, the next line of support may be the late Septemberswinglow at 8.7523. 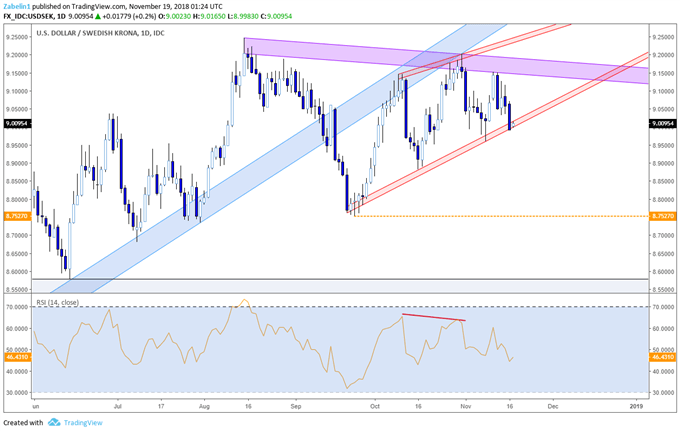 The fundamental backdrop seems to argue for the opposite outcome however, with USD/SEK rising as weak inflation and political turmoil weighing on the Krona while an unrepentantly hawkish Federal Reserve continues to offer support to the US Dollar. If the pair breaks immediate resistance at 9.1865, the Wedge top at 9.2484 lines up as the next upside barrier.

The seeming disparity between the fundamental and technical considerations at play argue against taking a USD/SEK trade at this time. A prudent strategy might be to wait until this disparity is resolved, either with a decisive shift in the chart setup or a substantive change in the fundamental narrative.