Join a free Q&A webinar and have your USD/SEK trading questions answered!

The Swedish Krona is likely to fall when local markets open after coalition talks to form a new government failed. Ulf Kristersson, head of the Moderate Party and leader of the center-right Alliance bloc, clashed with the grouping’s leaders. His proposition to form a minority government failed after two of the four parties in Alliance rejected the proposal.

Kristersson is also unable to form a grand coalition and is refusing to cooperate with the Sweden Democrats (SD), the country’s third-largest party. They represent the Sweden’s manifestation of the recent rise in support for European nationalism.

On Monday, the speaker of the Riksdag – Sweden’s Parliament – will speak to various party heads and appoint a new candidate to form a government. He may pick recently-ousted Prime Minister Stefan Lovfen, leader of the Social Democrats and the center-left party bloc.

However, there is no clear indicator that Lofven will have an easier time forming a government. The Alliance has ruled out supporting a center-left cabinet, and the SDs will not support any government that does not grant them a say in policy formation.

The gridlock is projected to continue as each party digs their heels in. Four attempts are allowed to create a new government before a new general election is triggered. The new government is also tasked with presenting the 2019 budget to parliament within three weeks of its establishment, or by November 15 at the latest.

On balance, the Krona seems unlikely to have any significant gains before the end of the yearas parliament scrambles to form a new government. The external backdrop also seems unkind. Swedish tumult is just one part of the pressure cooker that is the current European political landscape. Brexit negotiations are struggling and the rise of Italian economic nationalism warns of fissures at the heart of the Eurozone. Beyond all that, US-led trade wars threaten overall global growth precisely as the Federal Reserve steps up stimulus withdrawal. 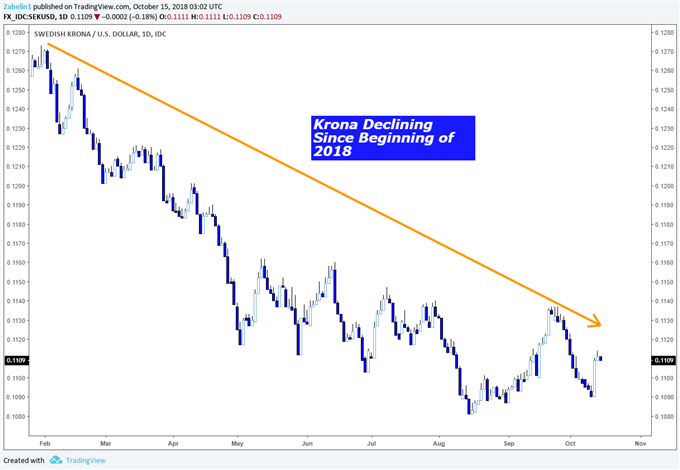 Note: The chart above shows SEK/USD to underscore the Krona trend. The common quoting convention is USD/SEK.