Can the Riksbank Save the Krona Amid Political Turmoil?

The Swedish Krona has been the victim of Sweden’s ongoing political gridlock that has gripped the nation since election. The rise of the Sweden Democrats (SD’s) is part of a broader regional trend of rising nationalism that is causing political fragmentation on the national and regional level. This has been a concern for markets given the potential political and economic turmoil that will follow in the months ahead.

The two biggest coalitions – The Red-Greens and The Alliance – have refused to support each other in a minority parliament. They have also pledged to not work with the nationalist SD’s. This is done on principle, but also out of a strategic maneuver to not work with a party that has its roots in neo-Nazism. To do so would undermine any party’s credibility.

Two candidates have not been able to form a government – with a third likely failure on the way. Ulf Kristersson, head of the Moderate Party and leader of The Alliance will be voted on as PM on November 14th.

Adding to the pressure, Sweden’s parliament has to approve a budget for 2019 by November 15th. Under normal circumstances, a government would have already been formed by this time. Absent that, there are measures to put forward a “neutral” budget by the current care-taker government. The disagreement in budget talks between the various parties and coalitions has signaled a potential re-arrangement of party and bloc allegiances in the Riksdag.

However, the Krona may be saved from the political drama. The Riksbank is considering raising rates for the first time in over seven years. The first rate hike will likely be in December. This came amid positive inflation data that has reached a point that is conducive for a shift in policy after almost a decade of expansionary policy.

USD/SEK in recent months has formed what looks to be a rising wedge, indicating a potential bearish reversal. Negative RSI divergence also signals that the pair might be topping out. Support that was established in the beginning of the year has now turned into a resistance with a new ceiling extending since mid-August. 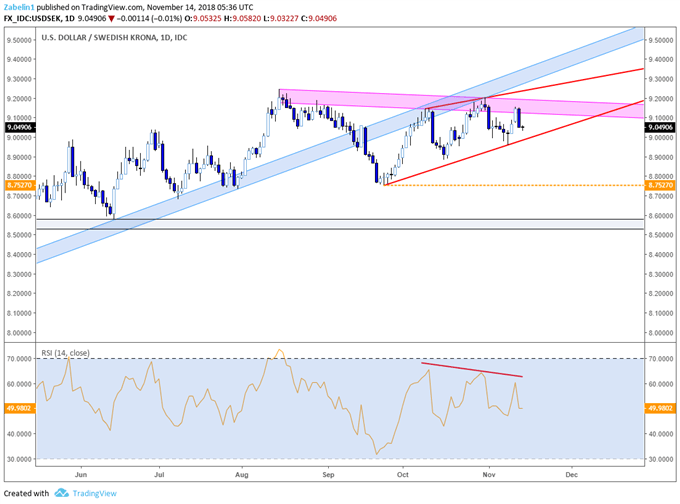