Looking ahead to next week, on Wednesday the Fed is expected to raise rates by 25 bps, and barring a major surprise on that front attention will, as per usual, be on the language and forward indications. Other key data is on the docket next week – CPI on Tuesday, Retails Sales on Thursday, and UofM Sentiment on Friday – but these will largely be overshadowed by Wednesday’s Fed meeting. For all economic data release times and estimates, check out the economic calendar.

The S&P 500 continues its bullish sequence of higher-highs and higher-lows in place since the March low, but momentum isn't ultra-impressive. There is the possibility of an ascending wedge to play out, with either a significant third peak forming since January or a shot higher out of the wedge to 2801+. If the wedge scenario is to continue to mature, look for short-term trading to tighten up before seeing a strong move.

Next week we have the ECB meeting, which could be pivotal as the central bank is expected to discuss a timeline for the removal of its easy monetary stance. While this is expected, the degree of hawkishness expressed by the central bank could be telling for the DAX. Expect more volatility out of the euro, though, but in return depending on how outsized the move is in the single-currency, the DAX may react in opposite fashion despite the recently strong negative correlation turning positive on a month-over-month basis.

The DAX turned down last week from an area of resistance surrounding 12900, but then found support late-week near 12600, which has both price and trend-line support running through it. The market is becoming generally difficult to read at this juncture, and until we see more clarity, standing aside for the moment (outside of maybe day-trades) looks to be a prudent approach. 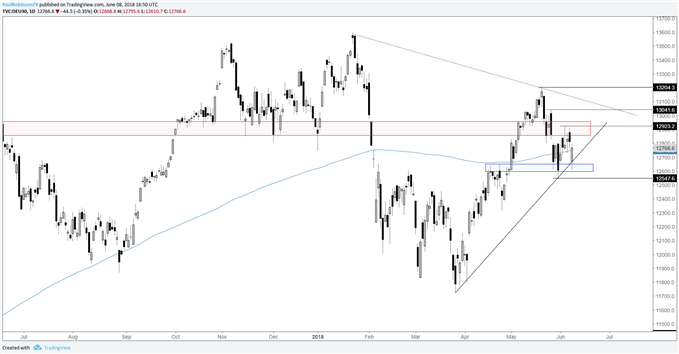 The ‘high’ impact data release coming out of the UK next week will be on Wednesday with the release of the Consumer Price Index (CPI) for May. This is likely to be more impactful for the pound, which like the euro, has become correlated to related stock markets. Hard to say how much currency fluctuations will have on the FTSE.

The FTSE is in the process of maintaining a lower-high from the record peak recorded on May 22. On further weakness, look for the 7610 level to give-way and for the index to thoroughly test of the 7600/550 area. As we stated in Friday’s FTSE commentary, this support area might no longer be valid, but we’ll still be watching how price action plays out before giving up on it. Otherwise, there is no substantial price support visible, with only the 200-day around 7430 as potentially meaningful support. Trading wise, if we don’t see a lower-low develop the market may stagnate a bit before deciding which direction it wants to trade next.