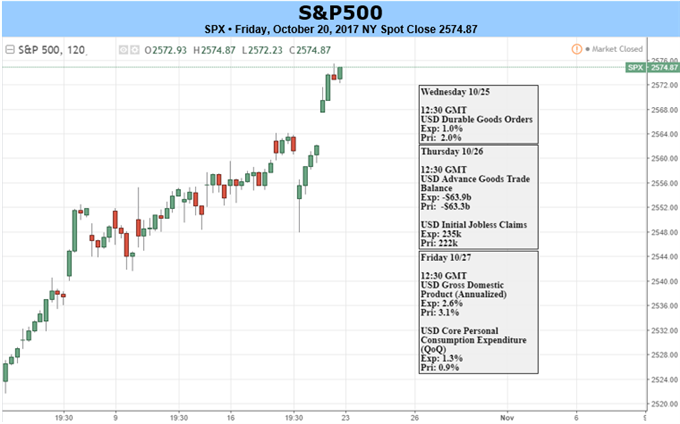 Check out our longer-term views on markets in the DailyFX Q4 Forecasts.

There a few ‘high’ impact data points coming up next week, but may have minimal impact on stocks, with the US dollar making the biggest moves on the releases. On Wednesday, US Durable Goods Orders is due out, Thursday brings Advance Goods Trade Balance, and likely to have the most impact is Q3 GDP on Friday. See the economic calendar for details.

As noted on Friday, the upward march in stocks was threatened only mildly and momentarily on Thursday. The market caught a bid at support by way of a pair of trend-lines, one rising off a swing-low created in August and another top-side trend-line extending higher since June which was overcome earlier in the month. The grind higher doesn’t present good risk/reward for fresh longs at this juncture, but until we see a strong reversal in momentum shorting is even less appealing. 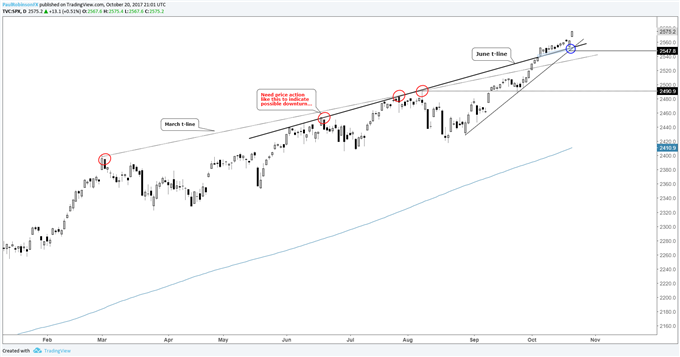 Having a good grasp on the psychology of trading is important – Building Confidence in Trading.

Looking ahead to next week, the big event of the week will be the ECB meeting on Thursday, where the market looks to gain insight into the central bank’s plans with its current QE program. Outsized volatility could certainly result from the outcome. The euro will likely react the strongest, but given the inverse correlation it has with major European indices, look for that to reflect in the opposite direction in equities. For details on timing and other data releases, please see the economic calendar.

Last week, the DAX continued to struggle around the pair of long-term trend-lines (2000/’15, 2015-current). It’s a pivotal spot as the market hangs suspended in air after rallying over 10% from the late-August low. A period of consolidation or a pullback would do some good for working off overbought conditions. A decline below 12909 will bring a pullback into focus, with 12676 as the first notable level of support. On the top-side, the pair of aforementioned trend-lines continue to be a headwind. 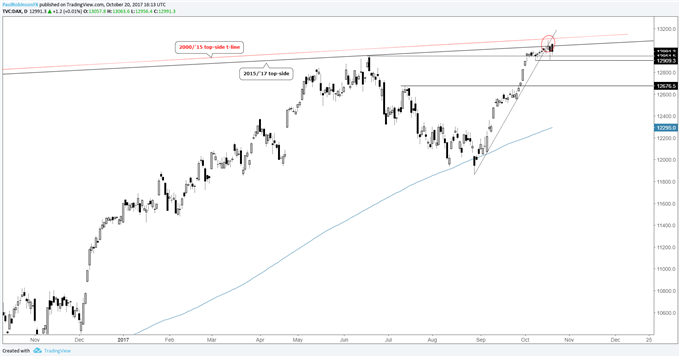 Next week, in terms of ‘high’ impact data prints we have UK Q3 GDP on Wednesday. ‘Brexit’ headlines will of course be a point of possible volatility as it has and will continue to be the case for the foreseeable future. See the calendar for a schedule of all data releases.

The FTSE is caught between stiff resistance and rising trend-line support. The area around 7550 has seen significant play since towards the end of May. It continues to prove problematic despite the footsie edging out a new record high on the 12th. Helping keep in a bid in the market is the February 2016 trend-line. It’s significant given it begins back at the end of the 2015/16 correction and passes under the ‘Brexit’ low. During August/September it held the market together before briefly falling apart. A resolution one way or another looks to be nearing soon. On the downside, a break will into focus support in the vicinity of 7460/30. A top-side breakout will bring the intra-day record high at 7599 into focus. 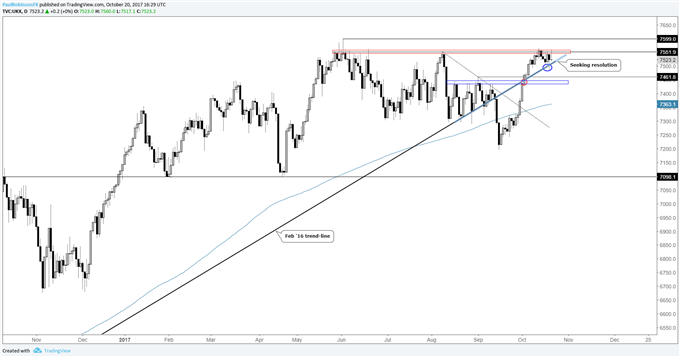