The S&P 500 has been rising in impressively slow fashion, and if you’ve been buying every little single-digit decline then you’re probably happy, but overall the trading is lacking good two-way direction as realized volatility remains in single-digit percentages. Yesterday, the market started off on its heels with a gap lower, the largest since August 10, but was able to shortly after the open begin recovering losses and close the session with a tiny gain.

The low came at a trend-line off the August 29 low and just below the top-side trend-line extending higher since June. There is good confluence between these two angles of support. We’ve recently (on 10/9) seen the June trend-line hold, so it is beginning to make its mark as noteworthy support. As long as both trend-lines maintain then so will a cautiously bullish bias. But should we see a blast lower similar to other times in the past few months which marked short-term tops, we’ll be quick to abandon that bias in favor of a ‘correction’ bias. 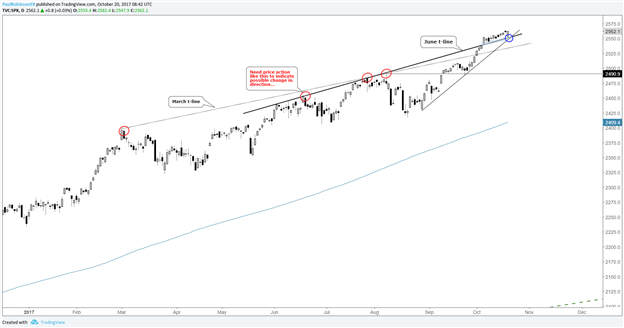 Paul conducts webinars Tuesday-Friday. See the Webinar Calendar for details and a schedule of all upcoming live events.

The Nasdaq 100 gapped sharply lower yesterday and was unable to make its way back into positive territory, but looks poised to make up the remaining losses soon. Support comes in right around 6k, while resistance arrives at a top-side trend-line near 6170. As far as an index with some volatility, this is the best the U.S. has to offer across the group. You could throw in the Russell 2k, but it’s been a rather tight range recently, and the Dow, the grind higher is offering very little at the moment in terms of opportunity. Low volatility environments are a common cause of frustration, check out this discussion from yesterday on how to handle it. 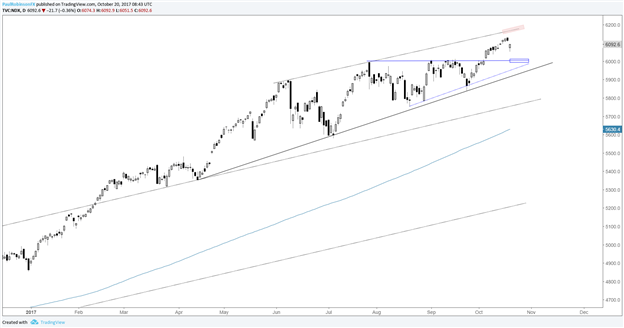