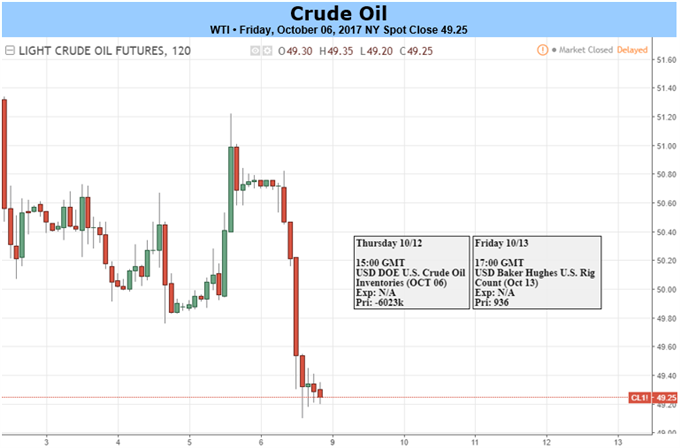 Crude Oil Crosses Under $50 as Tropical Storm Nate Bears Down

Oil prices took a hit this week, and with Tropical Storm Nate brewing in the Gulf of Mexico, the potential for deeper losses remains. In West Texas Intermediate, price action continued its bearish decline after having run into a key area of resistance last week, while Brent Crude (UK Oil) put in the third bar of an evening star formation on the weekly chart, and this can open the door to deeper losses there, as well. Earlier in the week, the American Petroleum Institute (API) released crude inventory data reflecting a rather significant drawdown in crude oil inventories of -4.08 million barrels in the week prior; well beyond the expected draw of -466.1k. Normally, this would be a bullish factor for Crude as diminished supplies indicate the potential for higher prices; but, this was offset by an even larger build in gasoline inventories, highlighting the potential for further disruptions with Tropical Storm Nate threatening the Gulf of Mexico.

The logical question is why a tropical storm or a potential hurricane might negatively impact Oil prices. Many will observe rising gasoline prices during a similar types of crisis, so why might Oil prices be moving down while Gas prices are going up? We saw something similar show in latter-August around Hurricane Harvey when a large number of refinement operations in South Texas, around the Gulf of Mexico, were knocked offline. This highlighted that the Oil being extracted could not be refined into Gasoline, at least not at the same pace as prior; so supplies built-up as refiners battled to recover from the devastation of the hurricane’s impact. This building supply glut of Crude meant that prices moved-lower as markets wrestled with the prospect of an even bigger picture-slowdown. And in latter-August, we saw WTI fall below the $46-level as worries about the Hurricane’s impact continued to build.

But as the threat of continued disruptions around Harvey began to slowly dissipate in early-September, bulls began to return into WTI, and within a couple of weeks we were already back-over the $50 level. As that move continued through the second half of September, an interesting level of resistance began to show, and this is derived from a trend-line that originates all the way back in 1998-2001 that continues to carry some element of bearing in WTI prices. Last week saw four days of resistance build at the under-side of that trend-line, similar to what was seen in May of this year, before bears took-over to push prices back below $50/barrel.

Below on the daily chart, we’re focusing in on this resistance inflection after last week’s reversal off-of-the-highs.

WTI Daily: Resistance at Trend-Line Projection in May, September

So, while a portion of this recent sell-off is likely coming from jitters around the potential for refiner disruptions in the Gulf of Mexico as Tropical Storm Nate bears down, there’s likely also some technical selling taking place and further contributing to this recent decline. Given the combination of both technical and fundamental factors that could further contribute to deeper declines, the forecast for Oil will be set to bearish for the week ahead.