Crude Oil Price Forecast: Round 2 Of Harvey May Knock Oil Bulls Out

Are you confused why Oil is trading lower after an encouraging EIA Crude Oil Inventory Report that showed a draw of 5.39m barrels and had refiners processing 1m bpd more than last year’s record refining activity? In a word, or name, Harvey is why Oil is trading lower, and you can see the confusion through derivative markets such as time spreads of Oil and the Brent/ WTI spread.

Either way, the supply chain component of the energy market that was hurt by Harvey was refiners. What you need to know is that refiners were the demanding so much Oil from producers that the massive amount of production, the production that has thwarted OPEC’s best-laid plans to bring global stock pils back to the five-year average, and now that demand is stemmied. Even last week, as evidence was building that hurricane Harvey was going to be a force unlike Texas and refiners along the Gulf of Mexico had seen in a while, refiners were processing record amounts in order to put as much into inventory as possible for when they may be forced offline for prepares.

If you have heard of the adage, some some for a rainey day, the refiners put that saying to practical use and they were a key reason for the 5.39m barrel draw of US Crude Inventories. Now, next week is expected to be ugly, and we could see multiple weeks of large inventory builds. Either way, as markets often do, they are discounting today’s good EIA Crude Oil Inventory Report in preparation for a rough batch ahead. Another aligning factor is that seasonal demand is about to swing lower.

For a helpful reference point, in 2005, the Gulf of Mexico (where American’s refiners are concentrated) were hit by Hurricane Katrina and Ike at the same time of year (hurricane season) as seasonal demand (from summer travel) was decling. From late August to November, Crude Oil traded lower by ~18%. While it’s unwise to say yesterday = tomorrow, it’s worth noting we have seen someing like this before, and it did not end well for Crude Oil Bulls.

Give the strong rise in Crude Oil since Q3 began, click here to see the opportunities we’re watching in Oil.

Looking at the charts, here’s the level that has my attention, $45.38. $45.38 was the late July low and breakdown below this level would open up the argument that we’re seeing a continuation lower of the 2017 bearish trend in Oil. The support on such a breakdown would favor targeting $43.68 (early July low), and $42.08, the YTD low. A break below $42.08 would open up concerns that we’re about to enter a painful new era of lower-for-longer oil prices that will put downward pressure on inflation and likely increase rhetoric from OPEC to extend production cuts.

The resistance level that has my attention is $48.16, which is the top of the corrective pattern before the Harvey was made known to be the monster it was. A break and close above $48.16, regardless of the reason would provide hope, against reason, that the Bulls may see $50 again this year. However, when combining the seasonal, sentiment, and fundamental picture, it’s hard to hold out hope without proof. 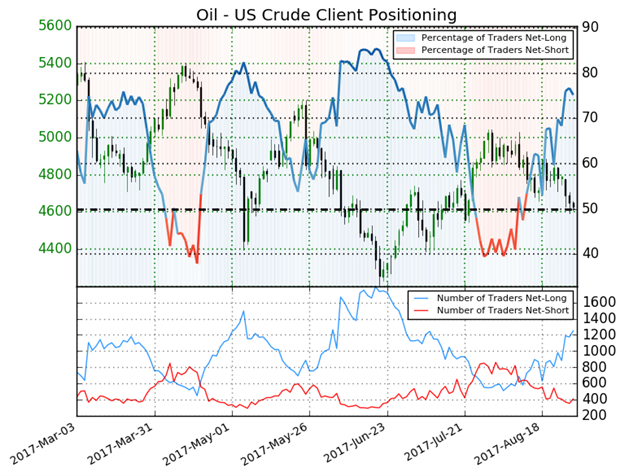 We typically take a contrarian view to crowd sentiment, and the fact traders are net-long suggests Oil - US Crude prices may continue to fall. Traders are further net-long than yesterday and last week, and the combination of current sentiment and recent changes gives us a stronger Oil - US Crude-bearish contrarian trading bias. (emphasis mine).