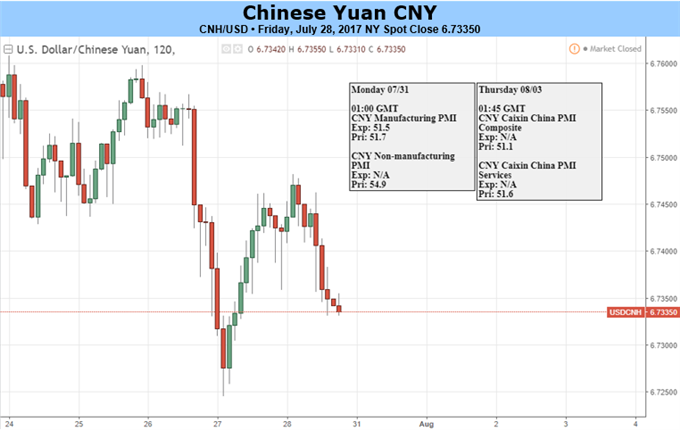 The Chinese Yuan gained against the U.S. Dollar this week, with the USD/CNH closing below a key support level of 6.7377. On Thursday, the PBOC strengthened the Yuan fix by 222 pips to 6.7307, the strongest level since October 2016. The USD/CNH has remained in a bearish trend (bullish for the Yuan) since May, but approaches an oversold territory based on RSI. Thus, a retracement is possible in the next week. In terms of event risks, Chinese official and Caixin PMI prints could be primary drivers for the Yuan.

China announced the strategy for the economic work in the second half of 2017, after top leaders met at the Political Bureau meeting of the Communist Part of China on Monday: The country will stick to the goal of “seeking progress while maintaining stability”. In terms of policies, China will continue to implement “proactive fiscal policy and prudent monetary policy”. This indicates that the PBOC is neither likely to raise benchmark interest rate nor cut it in the following two quarters.

Also, “pushing forward supply-side reform” will continue to be a main focus for the country, according to the meeting statement. We discuss that Chinese manufactures have been facing considerable difficulties amid excess domestic capacity and a decline in global demand. The supply-side reform aims to support producers with potentials and restructure or shut down low efficient ones. This could cause pains in the short-term but will benefit the entire sector in the long run. The July manufacturing PMI prints could give out some clues on the development of manufacturing industry.

In the first half of 2017, the official PMI whipsawed in a range between 51.2 and 51.8. The July print is expected to fall into this range, at 51.5, according the consensus forecast from Bloomberg. The Caixin PMI gauge was on a bumpy ride as well; what is worse is that it dropped to the contraction territory (below 50) in May. The July Caixin PMI read is expected to hold at 50.4 from the month prior. Neither the official nor the Caixin gauge has proved that sustainable improvement was seen in the manufacturing industry. Therefore, unless a big surprise, the PMI figures are less likely to provide strong support to the Yuan rate.

Besides the manufacturing PMI prints, the July Caixin service PMI read is worth to keep an eye as well. The service sector is considered to have shown increasing importance to the economic growth. However, the contribution of service industry to GDP fell to 60.2% in the second quarter from 61.7% in the first quarter, despite that the 6.9% GDP growth in the second quarter beat forecasts. Service industry’s falling weighing may not be as an obvious risk as those of non-performing loans and price bubbles, which are in the spotlight. Yet, in order to achieve the “seeking progress while maintaining stability” goal, steady growth in service industry is indispensable.