To Retrace or to Advance, That is a Question around the Yuan 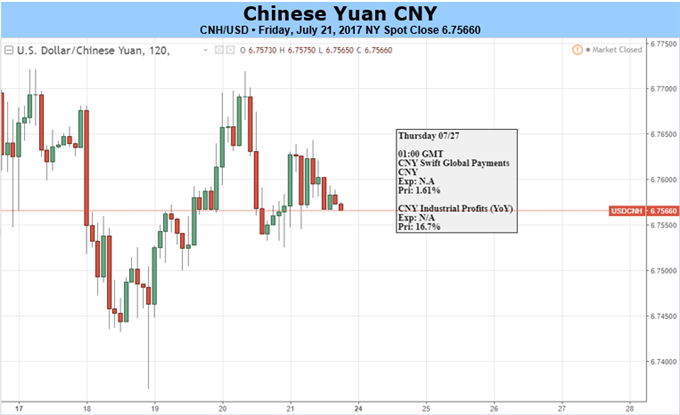 The USD/CNH was testing a key support level of 6.7580 (the January 2016 high) this week, though it failed to break below the level. Amid the Dollar weakness, the USD/CNH has remained in a downward trend since May. Looking forward, Chinese regulators’ guidance, July FOMC decision, as well as U.S. data prints are more likely to add mixed moves into the pair; both retracement and breakout are possible for the pair next week.

China will have a light economic calendar next week; Chinese regulators’ guidance may weight more on the Yuan. On Friday, the PBOC set the Yuan fix to be 6.7451, stronger than the offshore Yuan rate (USD/CNH) as of 5pm. This indicates that the regulator sees additional strength in the Yuan. If the USD/CNH breaks below 6.7580, the next level to watch is 6.7377, the 61.8% extension of the May range. The pair dipped this level the past week, but failed to hold or break below.

The spokeswoman of China’s FX regulator, SAFE, Wang Chunying, addressed on the Yuan exchange regime and capital flows this Thursday. “The volatility of Yuan floating in both directions has increased significantly during the first half of 2017”, a development that the regulator would like to see. There were significant amount of investors betting on one-side move in Yuan rates. Yet, a sudden rise in the Yuan’s borrowing cost could squeeze them out. At the end of May, Yuan’s overnight interbank funding cost in Hong Kong’s market soared to 43.8%, nearly 20 times of its normal level. This helped to reduce one-way speculation on Yuan rates.

A rising Yuan could also help to slow capital outflows from China. The spokeswoman commented on Fed’s monetary policy: Fed has increased interest rates for four times since 2015; however, the support that these hikes bring to the Dollar has been diminishing. She continued to say that amid eased external pressure, the risk of large amounts of capital flowing out of China has been largely reduced. China’s foreign reserves, highly affected by cross-border capital flows, dropped below $3 trillionin January, a psychological-important level, after the Yuan set a record-low against the Dollar in last December.

On the U.S. side, Fed will release the July rate decision next week; however, there is no expectation of any major policy change this monthright after a rate hike in June. U.S. economic data, on the other hand, are more likely to add volatility to Dollar pairs, including the USD/CNH. The focus will be on whether these data prints come in strong enough to support another rate hike in 2017; and if so, how soon it would be. Better-than-expected reads could drive the U.S. Dollar higher. For the USD/CNH, a major resistance to watch is 6.7765 and the next will be 6.8048.