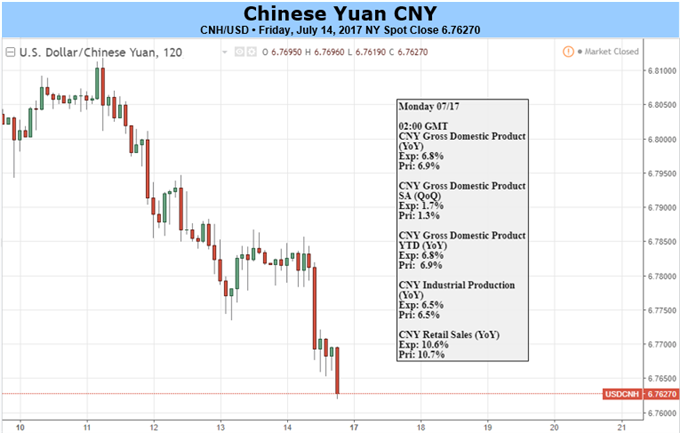 The Chinese Yuan gained against the U.S. Dollar this week, with the USD/CNH approaching a key support of 6.7585. The Dollar weakness continued following the Fed Chair Yellen’s comments on the “Fed put” at the two-day testimony, as well as worse-than-expected U.S. CPI and retail sales prints. Looking forward, China’s second quarter GDP to be released on Sunday is expected to add volatility to the open of the next week. Also, top U.S. and Chinese officials will meet on July 19th in Washington to discuss bilateral economic issues. Trade topics will continue to be highlights at the meeting.

China’s economy is expected to expand at 6.8%, according to Bloomberg and multiple Chinese financial institutions. Most likely, the print will come in line with the forecast. Yet, in order to get a better sense of the economic outlook, investors will need to look into two components of the economy, which have added the most uncertainties into the growth: China’s manufacturing sector and international trade. They represent two issues - excessive domestic supply and weak global demand.

In terms of the manufacturing industry, both the official and Caixin manufacturing PMI prints increased in June from the month prior. In specific, the Caixin PMI rose back to the expansion territory (above 50) in June. However, these increases could just be retracements rather than reversals; whether substantial improvements have been seen in manufacturers need further evidence. Also, smaller-sized firms seem to face greater challenges: the official PMI read for small producers dropped -0.9 to 50.1 in June, right above the threshold of 50.

In terms of trade, both China’s exports and imports expanded at a faster pace in June than in May and beat consensus forecasts from Bloomberg. Yet, the growth rate of trade in the second quarter fell to 17.9% from 21.6% in the first quarter. Also, a low base in the first half of 2016 may have amplified the annualized expansion rate in the first half of 2017. The spokesman of China Customs Huang Songping told that it will become increasingly challenging for China to maintain a rapid annualized growth in the second half of 2017 due to a larger base.

At the same time, the risk of trade disputes with major counterparts remains elevated for China. The U.S.-China Comprehensive Economic Dialogue to take place on July 19th aims to avoid such conflicts and to develop a bilateral economic plan for the coming year. U.S.’s trade deficit with China is one of the issues that Trump administration focuses on. After the Trump-Xi summit in April, the two largest economies reached a 100-day trade deal, which was seen as the first step to resolve disagreements on trade. As China is still in the transition period from export-driven to domestic-consumption-driven, it will have to continue to rely on the global demand for a considerable amount of time. As a result, reaching an agreement yet not compromising too much will be a delicate dance for China to play in the meeting next week.