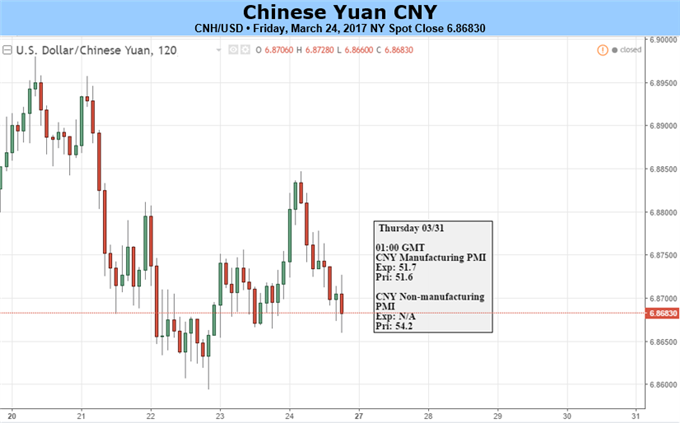 The USD/CNH remained in a consolidation range, despite that the Dollar Index (DXY) has broken below a major support. This hints at both a weak Yuan and a weak Dollar; neither has gained enough momentum to lead this pair. In the coming week, which currency can be less weak may determine the direction of Dollar/Yuan moves; or else, the pair will likely continue to consolidate. When markets open on Sunday, the USD/CNH may embrace elevated volatility, amid the vote result for the U.S. healthcare bill that is expected to be released later Friday, as well as PBOC’s Governor Zhou Xiaochuan’s speech at Boao Forum. From Tuesday, major event risks from China and the U.S. will add influence to the pair, including China’s March February PMI read, the U.S. Consumer Price Confidence report and job market data.

On China’s side, the Yuan has not received much support from the Chinese regulator: The PBOC’s guided levels have been set between 6.8845 and 6.9071 this past week, weaker than the offshore Yuan rate over the same span of time. This indicates that the Chinese regulator has no intention to strengthen the Yuan further. In fact, the Yuan fix was hold around 6.8800-6.8900 in most of the time in March; the strongest level in March was 6.8798, seen on March 1st. On the other hand, the monthly high day close for the offshore Yuan (low day close for the USD/CNH) was 6.8462 on March 15th while the Yuan fix on the next day was 6.8862, 400 pips weaker.

We can also tell Yuan’s weakness from the CNH/JPY. The pair had a similar move as the USD/JPY on March 21st, breaking below the opening range of this year. 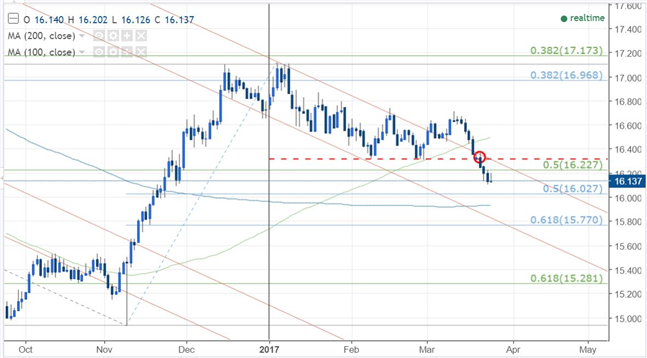 Next Thursday, China will release the March Manufacturing PMI print which is expected to fall to 51.2 from 51.6 in the prior month, according to Bloomberg. Despite that the forecasted read is still in the expansion range (above 50), a falling number indicates that the improvement seen in China’s manufacturing industries have not yet proved to be sustainable. In fact, other Chinese indicators show that producers are facing challenges of higher costs and lower sales. As a result, unless there is a big positive surprise in the PMI print, the gauge is less likely to bring significant support to the Yuan; however, if it falls greater than expected or even below 50, it can easily go against the Yuan.

On the U.S. side, the March PMI print came in well below forecasts, leaving the U.S. Dollar vulnerable. The fact that Fed did not accelerate the pace for future rate hikes in its plan may indicate that they have not seen sufficient evidence to support more than three increases this year. Major U.S. indicators next week such as consumer confidence and job data could give out more clues on the development of the U.S. economy. Also, Trump’s tax cuts plan has not been released in “two to three weeks” as promised in February. On Friday, the U.S. Treasury Secretary Mnuchin told that it is “coming soon”, but how much confidence this can add into the Dollar is still a question, especially after markets have waited longer than expected.

Overall, next week, there are few opportunities for the Yuan to receive supports from China; the Dollar has a greater chance to gain momentum if the tax cuts plan is delivered or the economic outlook improves. However, if neither happens, the USD/CNH will likely continue to stay in the consolidation range.