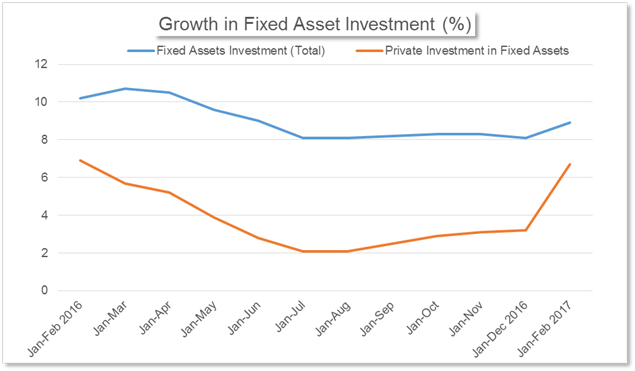 The overnight Yuan’s funding cost in Hong Kong, HIBOR, rebounded to 3.5887% on Tuesday, after it dropped to 3.0000% on Monday from 3.1647% last Friday. Amid the elevated Yuan’s borrowing cost, the USD/CNH failed to break above a key resistance of 6.9088 (61.8% retracement of the January drop). Tomorrow, Fed will release the March rate decision, with a greater than 90% probability for a hike. More importantly, the Fed’s plan for future rate hikes may determine trends for Dollar pairs including the Dollar/Yuan.

Despite of the faster expansion in January to February, the breakdown of private investment in fixed assets revealed some issues. Investment in oil, gas and mining industries increased +116.1% in the first two months, following a -6.0% contraction in the previous month. This is likely driven by the soaring energy prices, which have already sent Producer Price Index to an 8-year high. On the other hand, the average growth of investment in the manufacturing industry remained unchanged at 2.9%. This indicates manufacturing firms are still less interested to expand their business amid declining global demand and domestic production cuts; the overall condition for manufacturing firms have not yet improved.

China’s retail sales rose 9.5% in January to February, below expectations. In specific, auto sales, which has been a major contributor to total sales, dropped -1.0% over this period. This hints declining domestic demand: Chinese consumers may have become more price-sensitive as income growth slows down. Falling sales coupled with rising energy and raw material costs will likely further dampen Chinese producers’ conditions and in turn, add difficulties for the country to achieve its annual growth target.