- China’s foreign reserves rose in February, the first time in over half a year.

- China’s foreign reserves increased $6.92 billion in February from the previous month, the first rise in seven months. The February print also climbed above $3.0 trillion, a level considered to be psychological important, to $3.005 trillion.

The offshore Yuan strengthened against the U.S. Dollar, with the USD/CNH falling 67 pips within the first four minutes following the release. 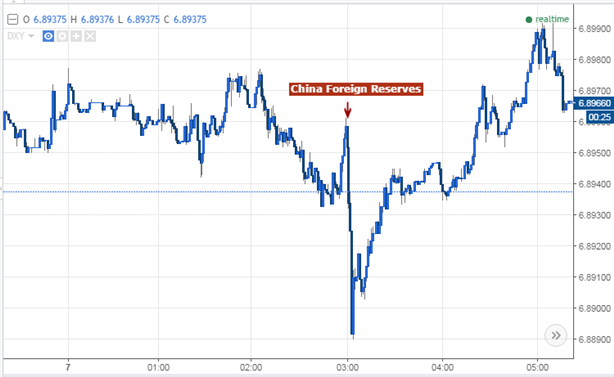 The USD/CNH maintained a roughly inverse relationship with China’s foreign reserves. One on hand, Yuan’s devaluation may increase capital outflows, and thus, reduce foreign reserves; on the other hand, when foreign reserves drop, China may hesitate to support the Yuan as it will further burn its foreign holdings, and in turn, the Yuan may drop further. In February, the USD/CNH traded in a consolidate range after hit record-high in January; China foreign reserves also steadied in the month. 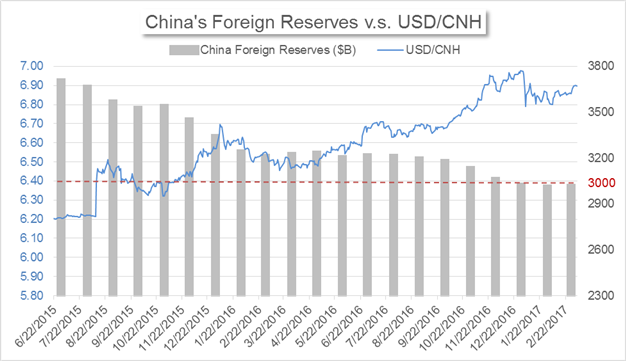 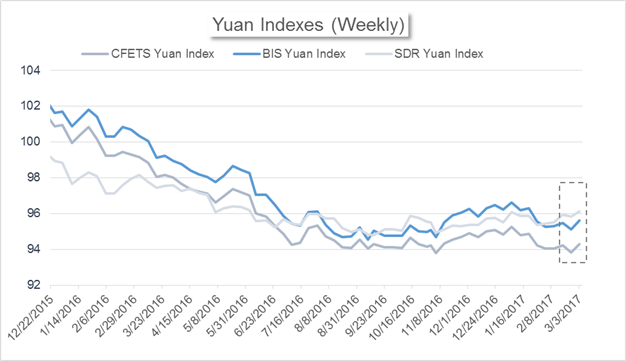 China’s Finance Minister Xiao Jie commented on China’s fiscal policy at a press conference for the National People’s Congress on March 7th. As the country will likely reply more on fiscal measures to achieve the 6.5% economic growth target amid neutral monetary policy, his comments have attracted wide attention.

Minister Xiao told that the 3% fiscal deficit ratio is proactive despite that it stays the same as last year: The fiscal deficit will grow in accordance with expansion in the GDP. The fiscal deficit for 2017 is expected to increase 200 billion Yuan and this should be able to meet the government’s needs: A) reduction in taxes and fees placed on companies and B) expenditures on healthcare, social welfare and educational system. Whether to further increase the deficit ratio in the future will depend on these needs.

Mr. Xiao told that regulators are studying on a new plan for individual income taxes. More exemptions and deductions will be included, such as education expenses for a second-child. Also, the individual income tax threshold will be lifted if needed based on further evaluation on income verse GDP.

In 2016, the average individual income expanded at a slower pace than the economic growth rate. This may increase the likelihood of raising the threshold for income tax.

In the government work report released last weekend, a plan for reducing taxes and fees for companies has already been disclosed.