- USD/CNH targets and invalidation levels for the near term. 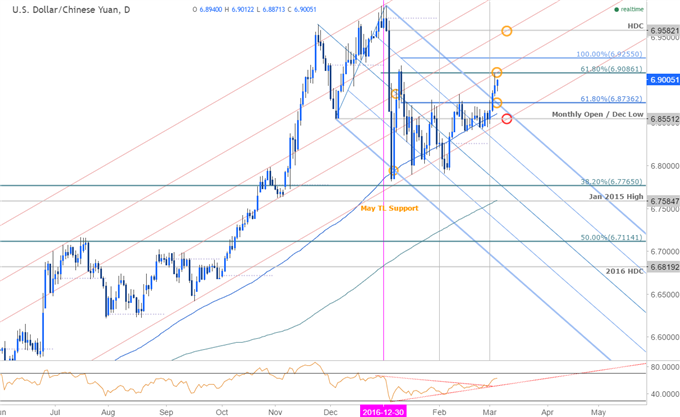 USDCNH cleared a multi-week consolidate range last week with the rally breaking through down-trend resistance extending off the yearly high and the 61.8% extension of the advance off the yearly low at 6.8736. Note that the move was accompanied by a resistance trigger-break in momentum and keeps the focus higher while above confluence support at 6.8548/90 where the monthly open & the December low converge on basic trendline support extending off the May 2016 low & the 100-day moving average (bullish invalidation).

Interim resistance is seen just higher at the 61.8% retracement of the yearly range at 6.9086 and is backed by the 100% extension at 6.9255. IF this rebound is corrective, topside advances should be capped by this threshold. Critical resistance stands with the 2017 high-day close, which converges on slope resistance at 6.9582. From a trading standpoint, I’d be looking to fade weakness into structural support with a breach above the upper parallel needed to mark resumption of the broader uptrend

The government work report also disclosed major focuses for the country in 2017:

China’s proactive fiscal policy will help to stabilize the economic growth and employment: the fiscal deficit in 2017 is targeted to be 2.38 trillion yuan. In specific, the government will reduce 350 billion yuan of corporate taxes and 200 billion yuan fees for companies.The prudent and neutral monetary policy aims to prevent financial risks. Reducing companies’ leverage is one of the priorities. Also, regulators will closely monitor “risks of non-performing loans, bond defaults, shadow banking as well as internet finance”.

“Over-capacity has become a serious problem in some industries”, stated in the report. In 2017, the country will cut additional 50 million tons of production capacity in steel and at least 150 million tons in coal. This will likely add elevated volatility to Chinese commodities prices.

Chinese household saving rate was approximate 50% in 2016 according to the National Development and Reform Commission. In order to release the potential in domestic consumption, the government will further development education and health care systems. This becomes increasingly important for the country amid the decline in global demand.

China will support foreign-invested enterprises to list on Chinese stock exchanges and issue bonds, according to the work report. In 2017, the country will “further open up its domestic markets”. Multiple Chinese regulators have already launched measures to encourage foreign investors to purchase bonds in China’s interbank market.

China will “firmly stay on the track to promote global economic cooperation” and will “actively participate in multilateral trade negotiations”. In specific, the country will promote the development of a free trade area in Asia-Pacific. This trade strategy is totally different from what has been released in its major counterpart, the U.S. Looking forward, China may shift to strengthening ties with Asian and European countries in terms of international trade.