Yuan Looks Clues from the PBOC after Fed Rate Hike

- The Yuan weakened against the U.S. Dollar on Monday, approaching the PBOC’s guided level.

The Chinese Yuan fell against the U.S. Dollar on Monday, touching 6.8981, the weakest in three days. This is less likely driven by major Dollar strength, as over the same of span of time, the U.S. Dollar Index (DXY) moved roughly in an opposite direction compared to the USD/CNH. One thing that may matter is the PBOC’s guided level. The Chinese regulator lowered the Yuan by -125 pips or -0.18% to 6.8998 against the Dollar on Monday. 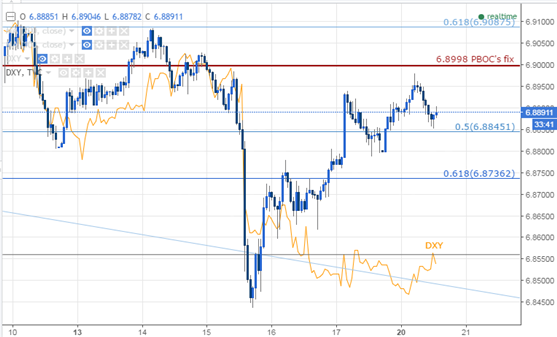 In terms of a trading setup, we discussed that the USD/CNH is in a consolidation range; more validation will be needed. There will be a couple of Fed officials talking on wire this week: Evans and Harker on Monday; Dudley, George and Mester on Tuesday; yet, the speech that is more likely to have a real impact on the Dollar will be from Fed’s Chair Yellen on Thursday. Before she talks, the PBOC’s daily reference rate could be a major factor that leads Dollar/Yuan moves.

Also, over the past two weeks, the Yuan has lost against a basket of currencies, indicating Yuan’s weakness to its counterparts besides the U.S. Dollar. 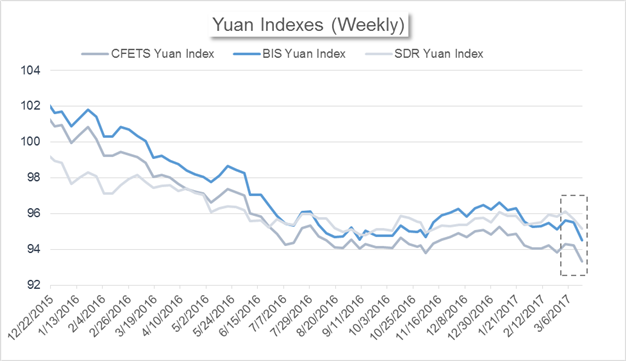 - The Deputy Governor of the PBOC/Head of SAFE Pan Shenggong said that “China’s overseas investments have hit new highs in recent years; overall, this is a good thing for the country. However, some companies are using it as a way to move capital out of China.”

Pan’s remarks indicate that the regulator will continue to maintain strong supervision on cross-border transactions. Amid a weak Yuan, China’s foreign reserves dropped for seventh months before rose in February.