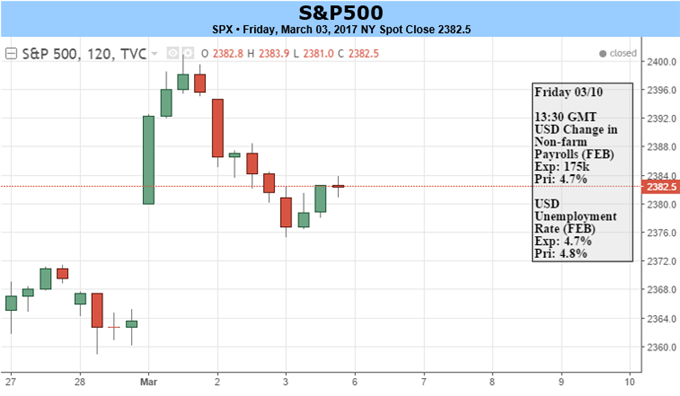 At the start of last week markets were quiet until U.S. President Donald Trump gave a speech to congress Tuesday evening, providing stocks with a shot in the arm on Wednesday. Most major global indices delivered impressive performances – new record highs were recorded by U.S. indices and the FTSE 100. In the two days to end the week there was a minor retracement of gains, but nothing alarming.

Looking ahead to next week, the economic calendar isn’t overly loaded with risk events, but a couple of key items on the docket could be market-movers; namely, the ECB meeting on Thursday and the U.S. jobs report on Friday.

The S&P 500 rose to new record highs on Wednesday following Trump’s congressional address the night before, but backed off a bit late-week. In a speech on Friday, Fed Chairwoman Janet Yellen effectively said the Fed plans to move at a faster pace, but not necessarily more hikes than previously anticipated. The market is expecting a rate hike at the March meeting. Given this built-in expectation, outside of a knee-jerk intra-day reaction, the net impact of Yellen’s speech on stocks was negligible. This coming week, the ECB on Thursday has market-moving potential, and then on Friday market participants will turn their attention to the U.S. jobs report. Neither are anticipated at this time to ‘rock’ current sentiment.

Looking at the techs: The S&P remains firmly planted in an uptrend, but the trend could become unstable given how extended it has become. Nevertheless, there is little reason for sellers to become aggressive at this time without a material price break. Immediately, the Feb 8 trend-line is in play as support and should hold if the market is to continue its streak of strength this coming week. Markets have a tendency to fill gaps, and should trend support give-way, we’ll be watching for a gap-fill down to 2363. Below the gap, look to the Feb ‘16 trend-line crossing through price action in recent months and price support at 2353.

Looking higher, resistance comes in at the Wednesday high of 2401 and underside of the November trend-line from where the market turned lower this past week. Looking beyond there, the next upward sloping line of resistance arrives at the upper parallel of the current channel in the vicinity of 2415/25. 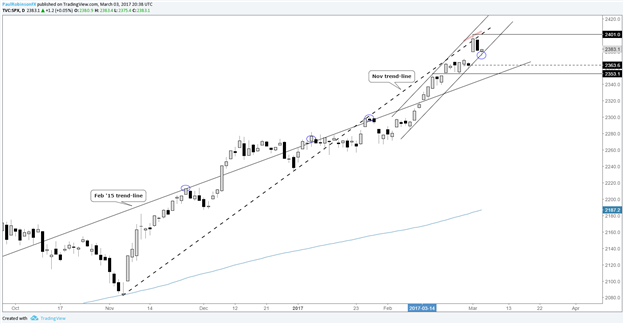 This coming week we have the ECB meeting on Thursday, which could certainly be a source of volatility; most likely, if it is, it will spawn from the press conference with Mario Draghi, as the central bank isn’t expected to make any material changes to current policy. Any strong move which may unfold in the DAX is likely to be inverse to the euro, and with that said, if holding positions in both, risk should be managed accordingly.

Technically speaking, the DAX remains constructively postured, but does have its work cut out for it if it is to trade to the 2015 record high of 12390. The German index finished the week below a confluence of resistance; April top-side trend-line, August top-side trend-line, and 12079 level from 2015. It will need to clear above this confluence before gaining additional upside momentum. On the down-side, not far below lies the December trend-line; viewed as fairly significant support given the repeated attempts to break it over the past week. With additional choppy price action, a rising wedge could develop between the top and bottom-side trendlines, but will require another week or so before the pattern reaches maturity (we’ll discuss later if it becomes relevant). 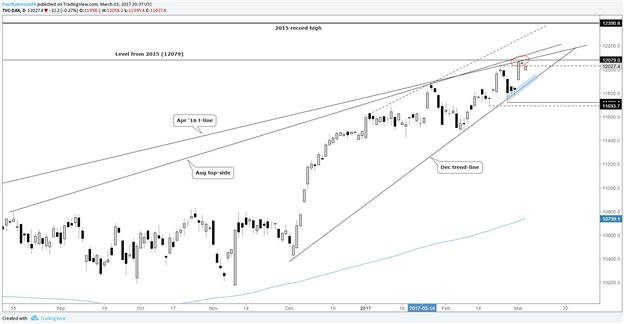 The FTSE 100 benefited significantly on Wednesday from strong risk appetite along with a declining pound. Looking ahead to potential drivers this coming week, there aren’t any ‘high’ impact events on the docket for the U.K. The focus is likely to be on general risk appetite, pound weakness, the ECB, and ‘NFP Friday’.

The FTSE finished last week just off record highs and looks poised to continue its drive higher this coming week. The footsie is sitting just above a top-side trend-line extending over peaks in 2013, 2015, and January.

Standing directly in its path is an upper parallel, but only viewed as minor in significance. Looking to potential stopping points on further strength, we are taking note of a pair of top-side trend-lines extending higher from peaks in 2015 and 2016; these arrive in the vicinity of 7440 to 7480. It would require a material break lower to change the current bullish positioning. Support levels clock in at 7354, 7329, and then a lower parallel rising up from Feb 2. 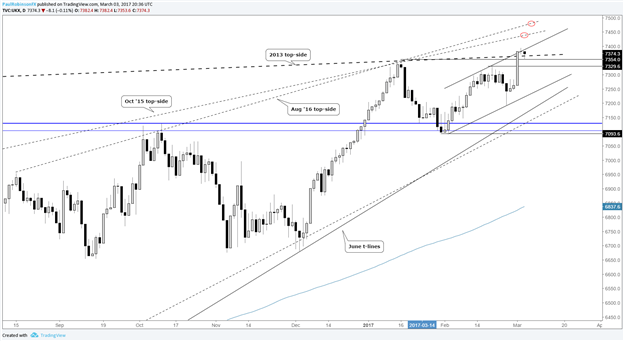