Dollar Draws on Many Sources to Extend 14-Year High

A Not So Surprising Charge

After nearly two years of consolidation, the Dollar (ICE Index) was finally driven to a critical bullish breakout in the final months of 2016. To many, the catalyst for the resurgence came as a surprise: the US Presidential election. The unexpected win by Republican nominee Donald Trump defied popular opinion polls and helped the Greenback overcome its perceived limitations. The new President is seen as the candidate committed to significant change, and his extraordinary campaign promises hold unexpected benefits for the currency. Talk of a massive fiscal stimulus program bolsters expectations of meaningful growth while vows to crack down on perceived, unfair trade advantages for major peers charges inflation expectations. That translates into superior growth forecasts and a Federal Reserve motivated to accelerate its rate hike regime. Heading into the new year and presidency, the maintenance of and extension to the Dollar’s impressive bull trend now rests on these unique connections coming to pass – or a much more dramatic fate befalling the financial system.

While the US economy is not on a runaway pace, it has nevertheless proven robust over the years while other major economies have wavered. In this environment where appetite for return is so prominent, a competitive economic pace can draw capital as readily as a central bank rate hike – and critically, more consistently. The promise of fiscal stimulus targeting infrastructure could significantly augment the pace of expansion and further draw contrast to those countries that have stagnated. The approval and details of the program remain to be seen, but a degree of speculative anticipation is already priced in.

Just as substantial in its promise – but carrying far greater risk – is the incoming President’s vow to confront what many see as unfair trade advantage. Tariffs on certain imports and tax breaks on certain exports are two options that have been floated in order to accomplish a rebalancing. This anti-trade shift is also the means for funding the aforementioned fiscal stimulus as well as planned tax breaks. In an ideal world, this could prove a balanced effort. However, there are many ways that this effort can prove a risk for the US and global economies. The United States is the world’s largest consumer economy, and a move to cut its consumption of trade partners’ exports represents a serious threat to their economies. It is not unreasonable to expect retaliation for such a move. If the world’s largest and second largest economies (US and China) were to engage in outright trade wars, the damage would not be limited to these two countries. In such a situation, US growth would likely suffer and the Dollar’s appeal would be significantly diminished.

While the promise of a more robust economy is a draw for investment and thereby lever for the currency, it is speculation of interest rate hikes that provides the practical expectation for return. The Federal Open Market Committee (FOMC) hikes rates for the second time in its very nascent hawkish regime on December 14th. That represented a 12-month gap between moves, but the second increase was full expected. Heading into the two-day meeting, the market had fully priced in the hike. The hawkish winds were further lifted by the forecasts for interest rates over the coming three years. In particular, the group increased its expectation for hikes in 2017 from two to three 25 basis point moves. That was the first time in 18 months that the central bank had increased its forecasts. 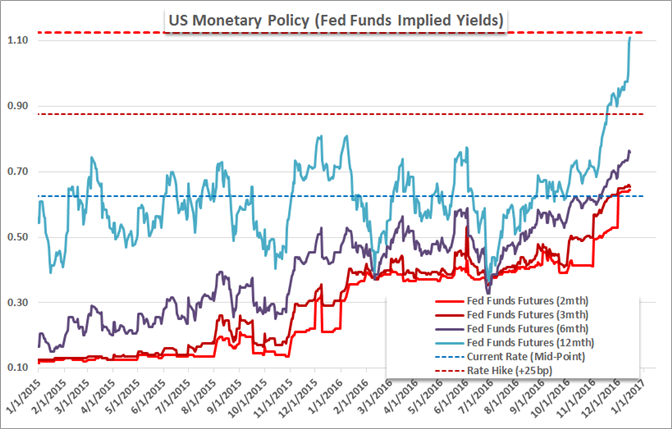 Having already advanced to a 14-year high with critical breaks – like the EUR/USD move below 1.0400 – it would seem that the market is already fairly reflecting the value of this fundamental theme. However, there is still plenty of opportunity to fuel gains for the greenback under the proper circumstances. Despite the central bank’s forecast for a cumulative 75 basis points of worth of tightening through the coming year, the market is only pricing in at most 50 basis points according to Fed Funds futures. Should data and rhetoric continue to support the hawkish outlook, convergence of expectations can extend the Dollar’s gains. Then again, if data falters and/or the Fed drags its feet, skepticism can eat away at what is already priced in and give significant footing for a retracement.

Though it hasn’t evoked this role in some time, it is important to remember that the Dollar is an ultimate safe haven asset. Yet, to truly take advantage of that position, the collapse in sentiment would need to be market-wide and intense. As it happens, a moderate degree of speculative flight would likely hurt the Greenback as it would curb rate expectations. In fact, through the past two years, the correlation between the DXY Dollar Index and VIX has flipped its traditional correlation to an unusual inverse relationship. A steady course for the global financial system and economy would bode well for the Dollar through rate speculation while intense risk aversion could recharge a long-dormant and significantly undervalued theme. In between these extremes though, the currency could very well struggle. 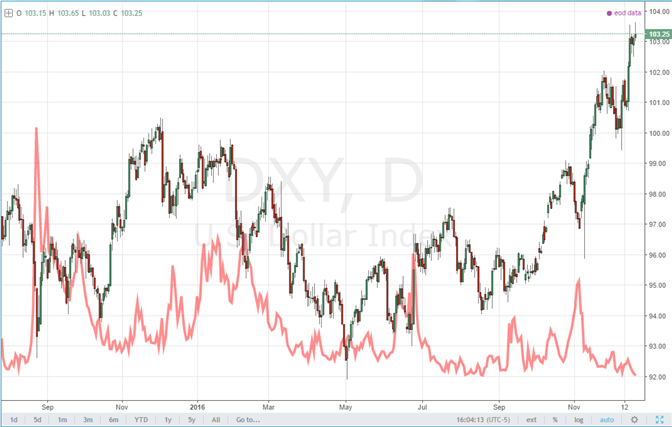 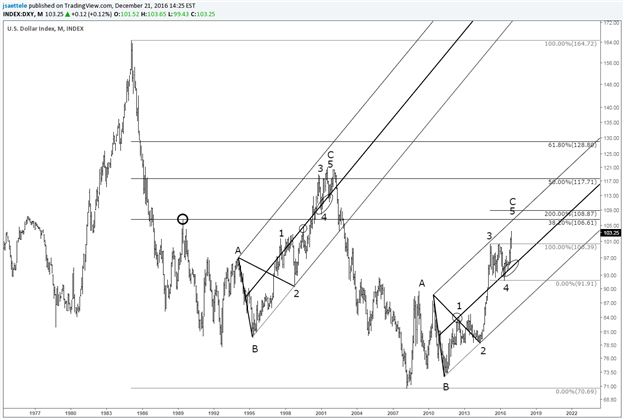 Watch the parallels on the weekly chart. As long as price is above the line that extends off of the March 2015 high, it’s assumed that a blow-off move is underway. The expansion of the March 2015-May 2016 range yields 108.87 (measured move). Also be aware of the 38.2% retracement of the DXY life at 106.61. This latter price coincides with the 1989 high. The earliest sign that a top could be in place occurs on a drop back below the slope line that extends off of the March 2015 high. The setup would be the same as the July 1999 and July 2001 tops (circled areas on the weekly chart). 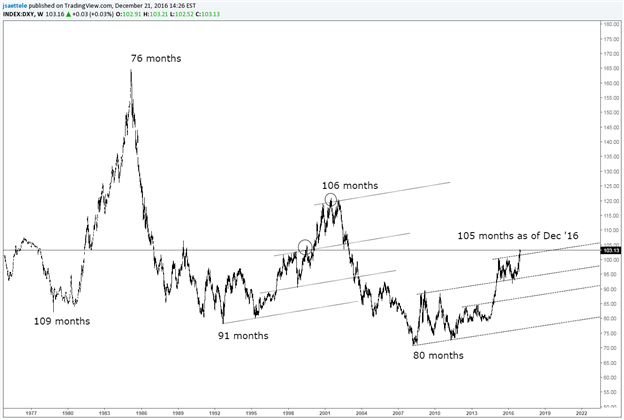 Finally, the shape of the rallies from 1992 and 2008 are similar and the wave counts might end up as identical. Proposed wave C now subdivides into 5 waves which indicates high risk of a top. It’s noted too that wave 5 already equals wave 1 (in points…not %) at 103.32. The angle of the rallies on the monthly log chart are defined by the B-2 line. The median lines for both sequences were support for waves 4 of C. After the 2001 top, the median line was support on the first leg down and the break of the ML signaled the onset of the bear. Watch for something similar.