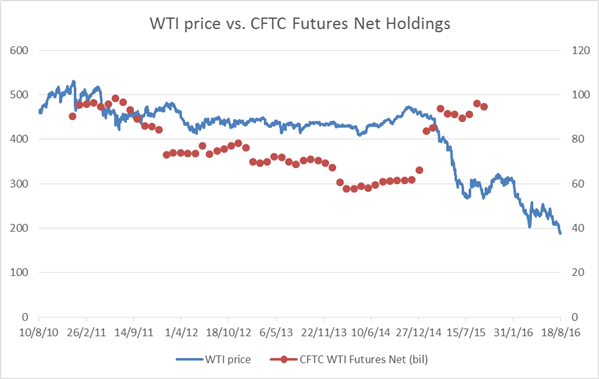 Q1 2016 Forecast: No End in Sight for Oil Price Declines

There is no end in sight for the global glut that has built up since OPEC started an oil price war with the US shale industry in early 2014. Both sides are determined to keep oil pumping off the ground despite growing discontent. Surveys of US drillers revealed that the most efficient US drilling points could sustain production at prices as low as $30. Iran also recently remarked that production is still possible at $30 price.

Patience of oil producing countries are wearing thin, no less via a disaccord on output target at the last OPEC meeting. US shale drillers have consistently reduced active rigs to cope with falling profit, while the International Monetary Fund nearly halved 2015-2016 forecasts of Saudi Arabia GDP. Although an imminent resolution is not in sight, oil could see spurts of volatility in Q1 2016 following sporadic efforts to stem price fall.

Given the supply surplus, future direction of oil price in 2016 will largely depend on global demand – which is estimated to stagnate across the biggest consumers: US, China, Japan. Macro factors like economic growth, investment returns, and geopolitical risk could also sway oil prices. In the first quarter of 2016 we will likely witness continual US interest rate hikes, quantitative easing by Europe and Japan, and a China slowdown. Any optimism in global recovery and investment returns would prompt interests in risk assets including oil, as evident in this graph of WTI prices versus net futures holdings (‘USD billion) recorded by U.S. Commodity Futures Trading Commission. Investors’ holdings have increased in reverse to prices since June 2014.

Technical View: 2008 Low In Focus for a Double-Bottom or Breakdown to 13yr Lows 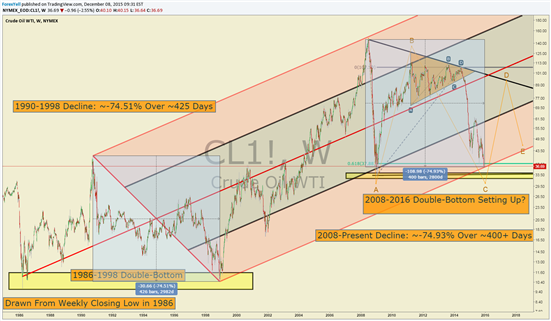 Few stories took headlines like WTI Crude Oil in 2015. Multiple times a day, the financial media would put out a headline to ask guests whether or not the ‘low’ was in for oil, and regardless of what their answer was, the correct answer was no. Into December 8, 2015, Crude Oil price was pushing to the lowest levels since December 2008. The specific levels of focus from the dark days in the belly of the beast that was the financial crisis / great recession is the closing low of $33.87/bbl on December 18th and the intraday extreme for 2008 of $32.40/bbl before price tripled into the 2011 high of $114.83/bbl.

From the 2008 top, the price of WTI Crude Oil could be tracing out a sideways consolidation. One pattern, known as a corrective sideways triangle should see the low of the current move from the 2011 top hold above the December 2008 low ($32.40bbl). The other pattern that presumes higher prices in 2016 is a simple flat corrective move or Bull Flag. The invalidation that the end of an 8-year corrective price pattern is playing out would be on a break below $32.40/bbl where price consistently remained below old support and began to treat that level of new resistance. Such a market development would argue there is more pain to come.

After breaking into the lowest level since February 2009, Crude Oil was flashing Bearish sentiment extremes. As per the CFTC Nymex Oil short contracts, bearish sentiment is hitting the highest levels on record. Additionally, the ever-popular Daily Sentiment Index from Jake Bernstein AND MBH Commodities in Chicago are showing Bearish Extremes at only 6% bulls. Such extreme sentiment shows that emotion is taking over logic and is a common occurrence at market turns. Of course, extensions extend, which means you still need to have a trigger for seeing the downside as exhausted and the upside as more likely. One thing we learned from the December 3rd move in EUR/USD is that when a crowded trade reverses, the effects are painful. If a similar move happens in Oil, the snapback higher will be aggressive and particularly painful for the record short-exposure of Oil shorts as short exposure is higher than the low in 2008.