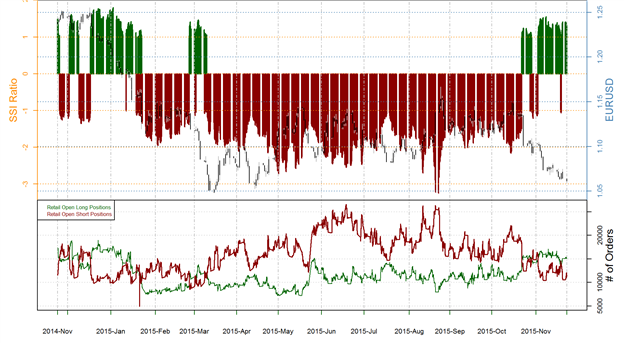 -Forecasts May Be Getting Ahead Of Themselves, And Then Again, Maybe Not

-EURUSD Daily Chart Show's We Could Be Entering "Bounce Territory"

As we head into the holiday season and the last 20+ trading days of the year, animportant question should be on your mind if you’re planning on being exposed to the EUR. That question is, “What is potentially not priced into the EUR on the downside given the risks ahead?”Markets are a discounting mechanism meaning that once credible information comes onto the scene,that informationis quickly priced into the market. This article is designed to spell out the dangers of counting on EURUSD or EUR/XXX downside into this data-heavy first week of December, especially December 3rd.

“Be aware that the market does not turn when it sees light at the end of the tunnel. It turns when all looks black, but just a subtle shade less black than the day before.”

Of course, many have found it nearly foolish to fight a central bank in the short-term as their power to direct the markets has become overtly evident since the financial crisis os 2008. However, the risk at present doesn’t appear to be so much on the question as to whether one should fight or follow the bank, but rather or not the European Central Bank may end up disappointment expectations. A year ago, Mario Draghi, president of the ECB seemed to have markets playing a game of “wait and go,” where he ECB leaks would provide hints of additional easing, only to be followed by an official statement that they were not ready to embark on that path yet.

If markets are playing out a similar scenario, Mario Draghi could be setting up markets for a major year-end reversal with the EUR of all currencies as the main culprit should he wait or fall short of meeting the uber-bearish market’s expectations. Either way, it appears we’re in for cold weather and Volatility, the question now is where will the volatility take us, higher EUR or higher USD. Right now, many bets are on a continuation of the QE trade (long GER 30/ Short EUR). The best hope for this trade is that Mario Draghi and the ECB surprise the market and do more than what is expected, and that could happen. The Federal Reserve committed nearly 3x the capital the ECB has said they would. If a surprise does happen, new lows, and a short at parity could be in short order.

As price travels near the YTD lows recorded on March 13th, traders are beginning to show signs of uncertainty as per FXCM's SSI. This pattern similarly played out at the last EUR turn where traders were going back and forth between being net long and net short EUR, before settling net-short by fighting a move from 1.0460 (YTD low) to the August 24th high of 1.1712. We’ll continue to keep an eye on a large move above medium-term resistance, the 21-day moving average at 1.0780 (see chart below), along with another steady build of net short positions before we get too comfortable with a look at a short-term low being in place for EUR.

EURUSD Daily Chart Shows We’re Back To Where Bounced Last

Charts Above Created by Tyler Yell, CMT with FXCM Marketscope 2.0

According to Technical Analysis, an environment is now set-up on the EURUSD chart where we could see a strong reaction. Given the market discounting and sentiment mentioned above, you now have the 3rd most anticipated event of the year (1st being the original ECB QE announcement in January, and the 2nd being the supposed Fed liftoff on December 16th) at a time when EURUSD is sitting near the 2015 price floor. The premise of technical analysis is that price has a memory, such that prior lows can be a good place for future lows and previous tops can be a good place for future tops. Some traders like to bring in ratios via mathematical tools like square roots and Fibonacci ratios between key ranges to identify turning points, but prior tops and lows are often more reliable because there is a variety of favored ratios. If EURUSD does indeed have a memory, we're coming into a zone for a potential reversal, especially if the heavily discounted event of ECB QE disappoints in any way, shape, or form.

As you look at the Daily Chart on EURUSD, you can see that the EUR has been sold aggressively, but that is not insightful. However, an extreme bearish sentiment is building as per Jake Bernstein’s Daily Sentiment Index based upon %BULLS polled as of November 23rd (Monday's Close), that shows EUR is sitting at extreme bearishness with only 3% bulls. That is the most bearish reading of nearly 40 asset classes. Typically, anything below 15% is seen as extreme, and turns can be aggressive near these levels. Therefore, the question from above, “What is potentially not priced into the EUR on the downside given the risks ahead?” could also be asked, “How can the ECB surprise EUR bears, and what if they come up short of expectations as they have in the past?”

Combining the extreme sentiment reading in DSI along with the instability of SSI and price coming into a potential floor aligning with significant events for the EUR in early December can likely help you grasp that a bounce could be in the cards. For good measure, EUR has a season tendency to rise along with stocks in December going back to 2006.

The Takeaway: A disappointment (or lack of dovishness relative to the market's extreme expectations) from the ECB could cause Mario Draghi's crowded trade (short EUR, long DAX) to unwind aggressively. This unwind could happen at a common chart juncture of the March 2015 low alongside the potential of extreme sentiment unwinding.

To join Tyler’s e-mail distribution list,please fill out this form