Would you find guidance on what we’re watching helpful? You may enjoy our FREE trading guides.

Despite the market-favorable outcome of a Macro victory in the French presidential election as traders were able to shelve fears of ‘Frexit’, the EUR declined on Monday. A close below 1.0947 would open up a Bearish key day, which could lead to a further set-back in EUR/USD after a few solid weeks of gains. The floor that many traders are looking at in the short-term is the 1.0821 level, which was the low following the gap higher from the first round of the French presidential election process. Traders will also see on the chart below that the Monday morning high on EUR/USD aligns with the trendline resistance of the 1-year trendline. Despite short-term bias for further downside on a close below 1.0947, traders should be on the watch for a resumption higher as option premiums are showing that EUR/USD downside-protection is fetching its lowest premium over a two-month tenor for 2017.

Traders looking for a more favorable USD set-up may prefer to look at USD/JPY. On Monday , USD/JPY traded above the daily Ichimoku cloud as JPY weakness remained taking the pair to the higest levels since mid-march and setting up a move above the 100-DMA (113.15). A breakout should keep traders watching the early March higher near 115. Given the move of the highly correlated US Treasury 10yr yield above the 50-DMA, USD/JPY could find the upside little contended. JPY crosses have maintained an upward bias given the risk-on environment we’re currently in as evidenced by the first time the CBOE VIX has traded below 10 since February 2007.

Lastly, Crude Oil is finding it hard to catch a break. Despite encouraging word that OPEC leaders were said to be discussing deeper cuts that lasted into 2018 (i.e., longer than the original extention planned) Crude oil remains offered. Some of the doubt may be commodity wide, and not just Crude Oil. On Monday, Chinese copper imports fell 30 percent in April, the lowest since October showing that a key purchaser of global commodities may help lead demand lower. Naturally, this has lead to many commodities like Iron Ore moving into bear market territory in what appears to be a capitulation type move of many base metals in mid-Q2. Silver is in the midst of it’s longest losing streak since 1980. 1 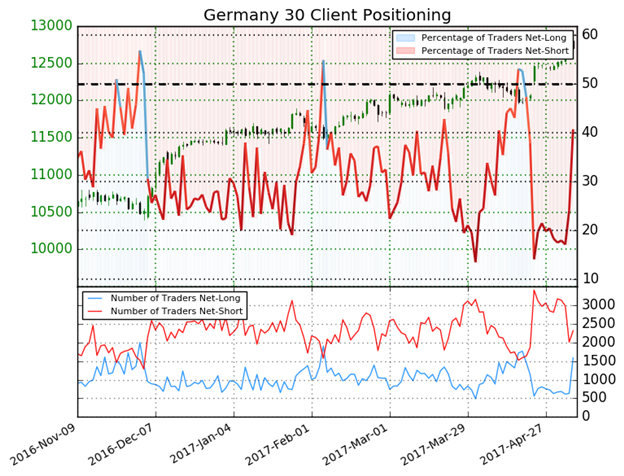