The past week saw massive volatility enter the markets on the heels of even more central bank news, as we move into yet another major announcement in which a Central Bank is expected to intervene in their own currency. After last week’s article, The Fed moved, as expected in outlining an additional stimulus program, thereby adding considerable weakness to US Dollars.

This week, focus shifts to the Bank of Japan as traders have massively sold the Yen in anticipation of further weakness. We had investigated a long entry in EURJPY in our Price Action Setups article 2 weeks ago, and the first profit target was obtained; illustrating how traders are attempting to sell Yen before the actual intervention announcement expected at the next Bank of Japan meeting. We’ll talk about previous weeks trade setups at the bottom of this article, but for now – we’ll investigate 2 current setups available via price action.

One of the great things about trading with Price Action is the fact that what matters most, prices, are front and center to trader’s technical analysis. This often comes up with Psychological Whole Numbers, and we saw a great example of how these levels can work in markets when trading opened on sunday.

On the Sunday open, the Yen gapped down massively; on the heels of the news that the Liberal Democratic Party had won elections in Japan; and this is the party behind the stimulus/intervention hope, so there is further hope that the Bank of Japan will embark upon a more aggressive policy at the next BOJ meeting on December 20th.

As the Yen gapped down, the AUDJPY pair ran directly to the price of 89, for a gap of 81 pips on the open of trading (picture below):

AUDJPY Gapped Higher 81 Pips on the Open of Trading Sunday 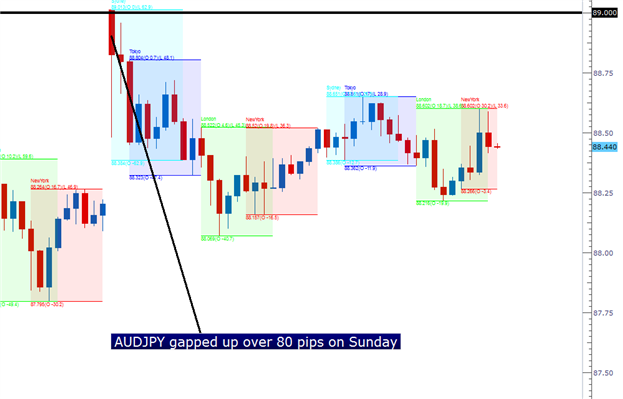 This price of 89 has long-term implications for AUDJPY. The chart below has 4 of the more recent inflections at this price. Notice how before The Financial Collapse, this level served as rigid support, yielding to price as the throes of the global meltdown pushed price below 55 later in 2008. 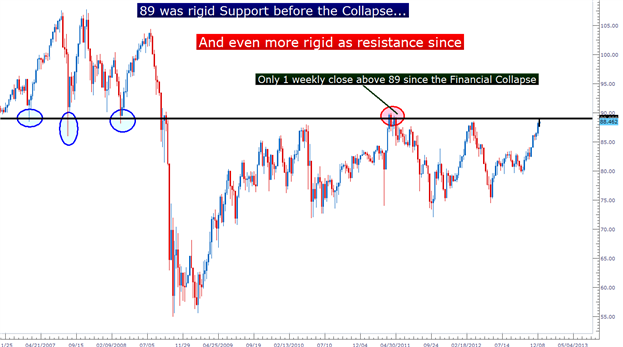 As the global economy begin rising out of the depths of the financial collapse, 89 has functioned as rigid resistance. Since 2009, there has been only 1 weekly close above 89, and the excitement on the open of trading pushed price right to this level.

While most USD and JPY pairs remain stretched with weakness, it can often benefit traders to look to other non-USD or non-JPY pairings to diversify their approach. After all, if we take 3 trades, all selling the Yen, we’re really just tripling our exposure in this one theme. Why not, instead, focus on what appears to be the most opportunistic pairing with Yen and then look elsewhere for diversification?

After printing new annual highs, the Kiwi has begun to sell off as traders take profits from this extremely bullish trend. Meanwhile, the UK printed better than expected inflation data this morning and GBP has rallied.

This brings up an interesting short-term setup in consideration of a longer-term trend. The trend in question is below on the GBP/NZD pair:

With a trend this strong, I really only want to be looking to that side of the trade: With such a strong down-trend, I only want to look to sell. Even if I decide I want to buy GBP, I would do it in another pairing (such as USD or CHF). And with the recent run-up in the currency pair, I want to look to use this to initiate a short in consideration of the longer-term trend at a better price. The chart below will illustrate this setup: 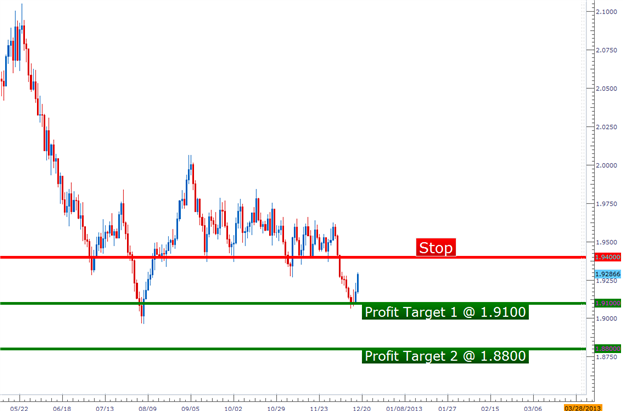 This week’s volatility saw numerous price action setups previously covered in this report move to their stop and/or profit target.

From the Price Action Setups published on December 4, 2012:

USDCAD remains open with an approximate +45 pip gain on the pair. Stops have been moved to break-even, or .9900 on this trade as well.

The AUDUSD position covered in the article was stopped out at break-even, and I wrote a full article about the management of that position in The Life Cycle of a Winning Trade.

From the Price Action Setups published on December 11, 2012:

To be added to James’ distribution list, please send an email with the subject line “Notification,” to JStanley@DailyFX.com.