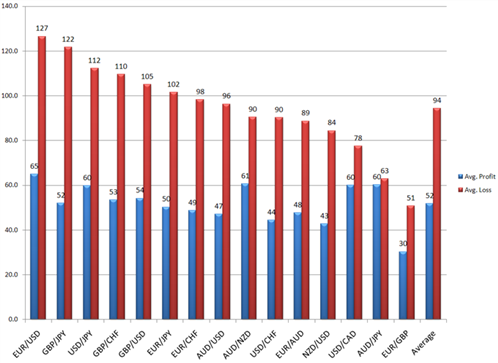 Learn Forex: The Life Cycle of a Winning Trade

Article Summary: This article will walk through a single setup on the EURUSD, as it was managed while the trade was moving in the trader’s favor. This article will illustrate scaling-in, scaling-out, and stop movement in an effort to properly manage risk in a heavy news environment (last week).

Trading can be a difficult sport to master. Not only are markets unpredictable, but can also, at times, almost seem as if human nature were working directly against us.

The common advice to ‘learn from our mistakes’ can often help educate us to what NOT to do, but how are we ever going to learn what we want unless we have any solid examples of successfully managed positions?

In the DailyFX Traits of Successful Traders research series, The Number One Mistake that FX Traders make is taking too large of a loss when they are wrong compared to the small wins they usually make when they are right. This disparity is so huge - that even if traders were able to win in 70% of instances in some pairings, they would still be losing money, on average.

Taken from The Number One Mistake that FX Traders Make

Is this because these traders line into positions willing to lose 2 dollars for every 1 that they might gain? Probably not: More likely is the fact that retail traders go into positions without a plan - instead relying on their own reactions to make the best choices for them.

So they react. A position moves against them, and often they want to ‘hold on for just a little longer to see if it comes back.’ Or perhaps they bargain: ‘If only it moves back to break-even, I’ll never do this again!’

In the even that the trade actually moves for them, they often close it off real quickly; fearful of giving back that profit to the market.

There isn’t anything necessarily wrong with the above behavior. It’s fairly standard human nature. But these types of actions can be the worst enemy of those that wish to become successful traders.

Thereby - outside of the trading strategy, all that we really can control is our trade management. And this is the very thing that often separates professional from amateur traders.

What follows below is an account of a single trade that was successfully managed by a trader when the market was working for them.

Of course, not every trade will work out profitably; but when trading defensively in an effort to avoid The Number One Mistake that FX Traders Make, the goal is to maximize wins, while mitigating losses.

I had previously taken a short position in the AUDUSD in last week’s Price Action Setups article, looking for price to buckle after encountering resistance. The trade initially worked for me, moving in profit by slightly more than the distance of my initial stop. Which is usually a good thing for me, as I’ll often move my stop to Break-Even, looking at it as a ‘free trade,’ after my initial risk is removed from the position.

But shortly after moving 45 pips in the money, something started going wrong: Price started moving up, and against my position. The first thing I did was look at the US Dollar, which is, of course, a big part of the AUDUSD currency pair; and I noticed that the Dollar wasn’t weakening all that much. As a matter of fact, the US Dollar had continued moving higher; which should have benefited my AUDUSD short position.

But it wasn’t beneficial. It was detrimental.

With my stop at break-even, I was comforted by the fact that, at the least, I was not going to lose on the trade. But shortly after moving 45 pips in the money, something started going wrong: Price started moving up, and against my position. I also noticed that the EURUSD was moving down very briskly, exposing the US Dollar Strength that I wanted to be on the side of much better than the AUDUSD position that I had previously entered a couple of days prior.

Resistance on EURUSD with line drawn at 1.3100 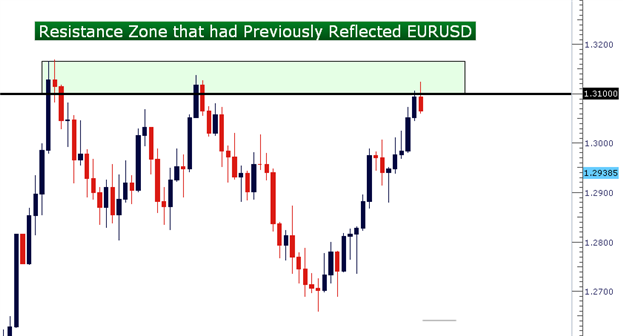 And since I no longer had any initial risk in the AUDUSD trade with my stop at Break-Even, I was able to take advantage of that EURUSD weakness by triggering a short position.

While this doubled my exposure in long US Dollar positions, my initial risk being removed from the AUDUSD position allowed me to reallocate that money in EURUSD.

I triggered 1/2 of my EURUSD position shortly after price had ran into resistance at 1.3100, which had twice already functioned as EURUSD resistance. This type of Price Action Support or Resistance can be important for a trader: Not only does it show us where the market had previously responded to price, but it shows us that traders placing trades with actual money respected that price.

I wanted to first test the position by entering half of the total lot; watching cautiously for resistance to remain respected.

I placed my stop shortly above that swing-high, with an initial risk level comparable to the AUDUSD position I had placed previously (slightly less than 40 pips). A little later in the day, during the Asian Session, I added the second half of my lot with my stop at the same price as the previous EURUSD entry, as EURUSD had shown further respect for 1.3100 and moved lower to 1.3050.

Scaling-in as the Position moves in profit

And then the market moved for me. I didn’t have to do anything other than let the market do its work, and I merely observed, deciding when I wanted to move my stop to break-even on my EURUSD position.

Meanwhile, my AUDUSD position moved against me, running into my break-even stop, which can be frustrating but inevitable. Had my stop not been moved to break-even, price would have run to my initial stop, entailing a loss on the trade.

Instead, I was of AUDUSD with no gain or loss, and I have a nice gain building in my EURUSD position. Once I had my initial stop distance in the trade as a gain, the stop was moved to break-even once again, looking at the EURUSD position as now a ‘free trade’ since none of my risk capital is exposed in the trade any longer.

The next day and there is an even larger gain in EURUSD, and the stop is moved in the money to lock up a portion of the built-up gain. This way, if the pair retraces against me, I’m at least out with some type of profit for my efforts. At this point, the gain is more than two times my initial risk amount, so I begin to plot a scale out strategy, under the presumption that the EURUSD move might not last for too much longer, particularly in a heavy news week with NFP on the slate for Friday morning.

I decide to remove the position in quarters in an effort to get as many pips out of this move as humanely possible. I move my stop deeper in the money, locking up even more of the built-up profit, and taking profits on 1/4 of the lot at gain of 110 pips (~3 times my initial stop amount). 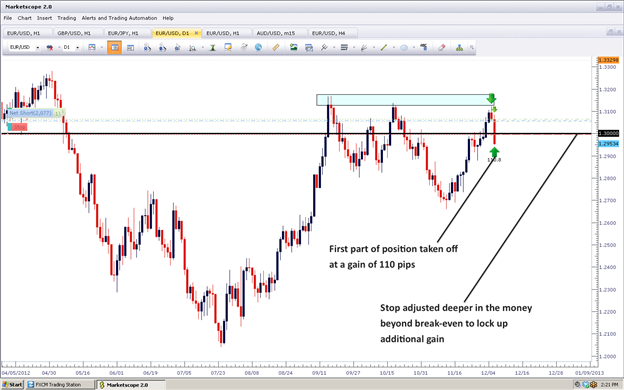 As the pair moved further in the money for me, I take off another 1/4 of the position, this time at a gain of 171 pips, leaving half of the total position remaining.

Moving into NFP, a 3rd stop adjustment was made to lock up nearly 3 times my initial risk amount (a gain of 118 pips was locked up via the trailed stop). I knew that NFP was likely to generate considerable volatility, and this could certainly expose any unrealized gains in the trade.

But it could also bring a much bigger move, so I wanted to let the trade run since I stood the chance to make a considerable amount more.

The initial rush of NFP was favorable to me. I was able to remove the 3rd quarter of the position after a quick run of an additional 10 pips for a total gain of 183 on the 3rd part of the lot.

And shortly after NFP, price started to run against me: All the way to my stop at +111 pips from my initial entry price.

Second and Third Scale out of EURUSD with Trailing Stop Triggered 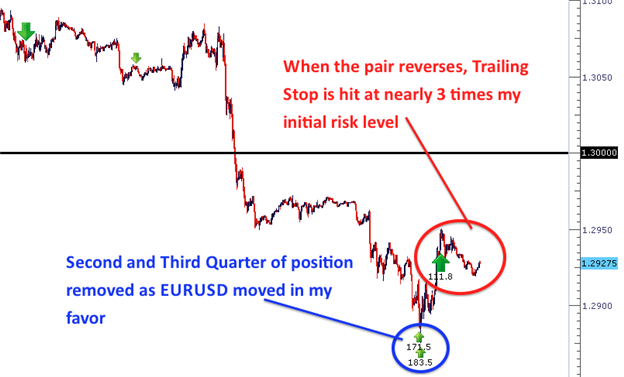 Absolutely not; but as a trader, it’s not our job to predict the future… that is impossible. Trading is often more about risk management than guessing which currency pair might do what on a given day.

In many cases, trading is risk management: Maximizing gains, and minimizing losses.