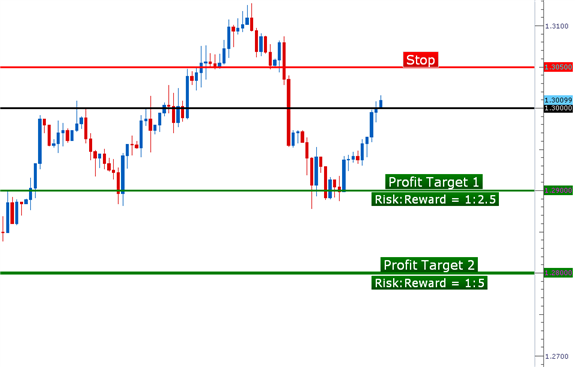 Article Summary: Price Action is a form of Technical Analysis using only price, without indicators, to provide the entirety of the trader’s chart analysis. This article goes over 2 different setups incorporating fundamental news, retail trader positioning, and risk management. The bottom of the article provides an update on last week’s positions, which were also discussed in The Life Cycle of a Winning Trade.

Another week in the FX market and another slew of data releases and Central Bank meetings to add volatility across the world. On Wednesday, December 12, 2012 The Federal Open Market Committee concludes their December meeting, in which it’s largely considered that traders will get an idea of The Fed’s stance in regards to future policy.

There have been many rumors about what may happen: Some believe that the Fed will announce a new stimulus program to replace the outgoing Operation Twist. Many of these rumors revolve around Mortgage-Backed Securities being the targeted asset of this program. Other traders look to The Fed’s projection of rates, which they have previously stated the expectation to keep ‘very accommodative’ policy into 2015. However, markets are pricing in an approximate 25% chance of a rate hike of 25 basis points by the end of 2014.

While late 2014 or 2015 might seem like splitting hairs while we sit in 2012 – this stance from The Fed is extremely important in regards to risk assets, as economic data still fails to show noticeable signs of recovery and The Fed’s accommodation is one of the largest reasons that asset prices remain at elevated levels. A perceived removal of those accommodations could bring considerable hardship to markets.

So moving into tomorrow’s announcement from The Fed, traders could potentially see risk tones set themselves with continued dollar weakness, or perhaps even a reversal with dollar strength if The Fed disappoints.

Below, we investigate a trade on each of these themes: With the expectation that one of these will work while the other may not. It’s these trading situations in which risk management is so important, so that even if I win on one trade and lose on the other – I could still net out a profitable line.

EURUSD staged a strong move upwards to start the week, and I want to look to fade it; however I go into the position knowing full-well that tomorrow’s FOMC announcement may bring considerable dollar weakness to the fold which would, likely, work adversely against my short EURUSD position.

Rounded whole numbers can often function as considerable support and/or resistance, and while 1.3000 may not, in and of itself, predicate the selling that I’m looking for; I do expect sellers to enter the fray more briskly above this level with the Euro being viewed as ‘expensive.’ And if The Fed disappoints tomorrow, short Euro positions could prove especially attractive as the perceived pain factor of the European economy could increase massively with less Fed accommodation than expected.

In these cases in which traders are looking for a reversal of a short-term move, it often behooves traders to be even more aggressive in regards to risk management. As such, my minimum profit target on this setup is 1:2, risk-to-reward ratio, with a secondary target of a 1:4 risk-to-reward ratio.

Buying highs and selling lows can be an intimidating concept for a trader to learn; as most will attempt to fade these movements: Selling when price hits a high, or buying when price hits a low. This can be very counter-productive, particularly if proper risk management is not in place.

SSI, or The Speculative Sentiment Index from FXCM shows retail-trader positioning, and judging by the current readings in the major pairings, retail traders are loading up with long USD positions after a strong move down, attempting to call a bottom that may or may not exist.

Most promising from SSI are two currency pairs that have also been two of the strongest pairings in recent weeks: AUDUSD, and NZDUSD. Despite the fact that these pairs are in the process of forming multi-month highs, retail traders continue to load up on the short side of the trade, attempting to call a top in these pairs.

But perhaps most attractive is that these two pairings present a very compelling manner of selling the dollar; and if we do get the risk-on spark from FOMC tomorrow, these could be particularly amenable avenues for traders to investigate. 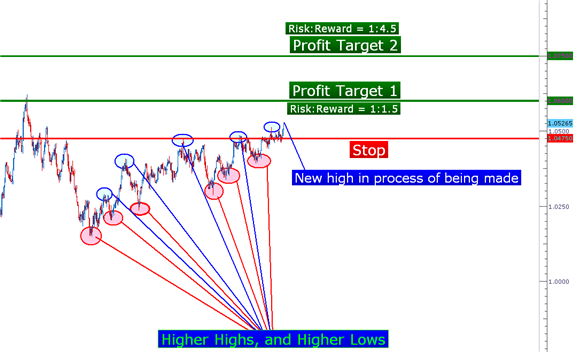 AUDUSD has put in a steady number of higher-highs, and higher-lows – exposing the up-trend that's been seen in the pair since hitting its 1.0150 low a little over 9 weeks ago. The pair has twice reflected off of the psychological 1.0600 level, and if AUDUSD is able to make it to 1.0600 again I want to look to take advantage of that by taking profits on the first portion of the position. At that point, stops will be adjusted to break-even as I look for a continuation move to 1.0750.

Initial stop is set at 1.0475 so that if any unforeseen events arise heading into FOMC, or if FOMC comes out with a recipe for USD strength, the damage can be contained as my EURUSD short should prove attractive.

The USDCAD trade from last week’s Price Action Report is still open and currently in profit by 30 pips, or 30% of my initial risk amount. If price has not moved further before FOMC on Wednesday, then stop will be moved to Break-Even ahead of the announcement.

Break-Even stops can be important to trade management, and the AUDUSD trade from last week’s Price Action Report illustrates this. After moving in my favor by slightly more than my stop distance, the stop was moved to Break-Even to remove the initial risk from the position. Price then moved back to my Break-Even stop, taking me out of the trade. But by moving my stop to break-even, I was able to re-allocate that risk amount in a EURUSD short position that ended up working out pretty well for me. I wrote about this trade, with full illustrations in the article, The Life Cycle of a Winning Trade.