New Zealand Dollar Likely to Soften in the Weeks Ahead

The Kiwi-Loonie cross enjoyed a significant climb last quarter but rising crude prices and a weakening NZD could look to retrace the move. More broadly, the Kiwi rallied against all crosses. This move has since been fully undone for NZDJPY after the Yen rallied alongside a USDJPY flash crash. 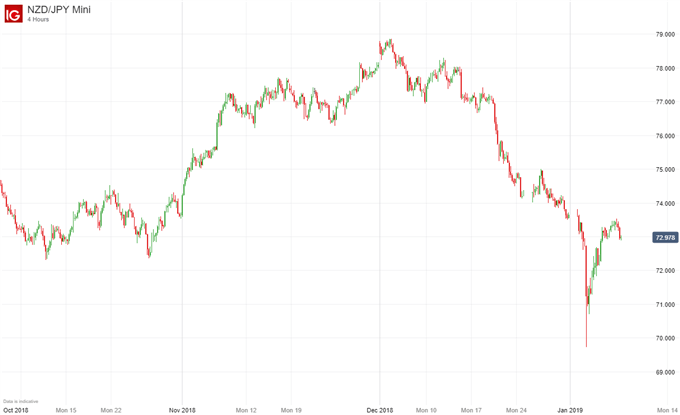 While the pair is fundamentally and technically different from NZDCAD, I do believe it can serve as a bellwether for a larger retracement by the Kiwi against other pairs, but to a lesser degree. With that in mind, I believe the Canadian Dollar is a perfect candidate for the long-side of the trade.

At the same time, the Bank of Canada has been more hawkish than the Reserve Bank of New Zealand. But at the BOC rate decision on January 9th, central bank officials struck a more dovish tone. While the tone was widely expected, some economic growth projections may have been lower than expected. While the shift may weaken the immediate case for a bullish Canadian Dollar, I believe the foundation for the trade remains firm over the next few weeks. 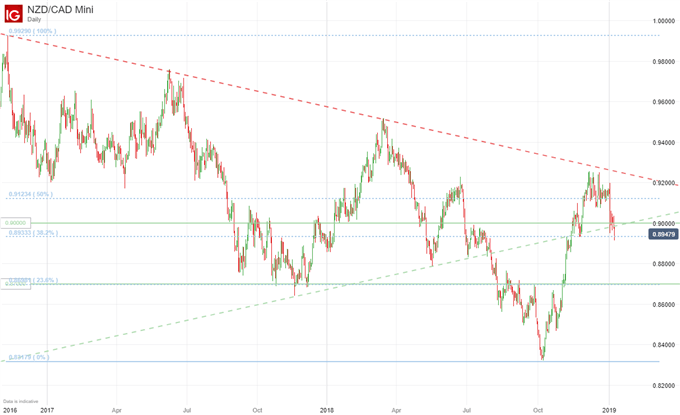 The technical landscape of the cross may be the most encouraging argument. To the topside rests trendline resistance from late 2016. This line is unbroken since its inception and is an encouraging signal for a bearish argument.

A minor psychological level at 0.9000 is also to the topside and provided moderate support for the pair last week. The level will now act as resistance in the coming days. Further, a smaller resistance level lies at the bottom of the recent range and is the second line of defense for a sustained climb. That said, I have set a stop near this lower bound. 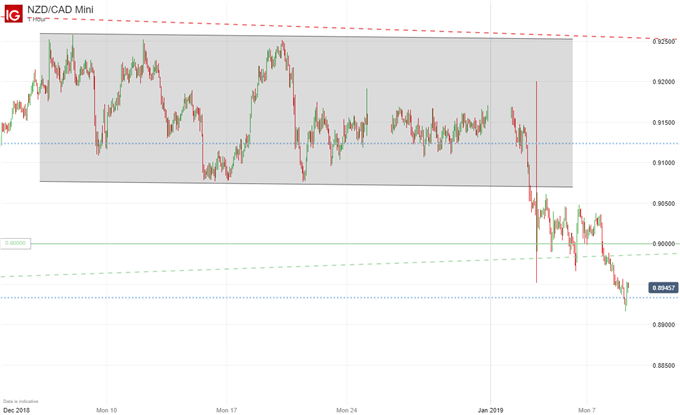 To the bottom side, 38.2% Fibonacci retracement is the first level of support. This line will be first to go on a bearish development. At the time of this article’s publication, the pair trades marginally higher than the level after a previous break below. A sustained break below the pair would be an encouraging sign for the trade and a close below would then see the 38.2%-line act as resistance moving forward.

Price levels to be cognizant of rest near the 0.8700 area. I believe this zone will provide some moderate support, offering an opportunity to re-evaluate the trade if they are reached. My position is currently active, entered near 0.9000. Live updates will be provided on my Twitter @PeterHanksFX.