The Reserve Bank of Australia Has Done AUD Bulls No Favors In The Past Month. It’s Not Likely To Start Now.

The Australian Dollar was hit hard earlier this month by the Reserve Bank of Australia’s decision to admit that there was after all some downside risk to record-low interest rates. Previously it had been vocal in its belief that the next move for the Official Cash Rate would be a rise.

Then the currency was whacked again by a marked downward revision to the growth and inflation forecasts used by the RBA when setting policy.

Neither of these events was in any way unjustifiable, but I speculated closer to the time that the timing might have been at least interesting. The RBA chose to move after the speculation about a more cautious US Federal Reserve policy path this year had been confirmed and digested by the market- thereby arguably maximizing the impact on AUD/USD.

The Australian central bank has since suggested that the Australian Dollar is really not all that weak by historical precedent, and that a lower currency would be helpful in boosting stubbornly low inflation. It is clearly concerned to keep the Aussie’s lack of likely interest rate support front and center in the markets’ mind, even as that market eases back on US rate-hike expectations.

If RBA Governor Philip Lowe strikes this note again when he testifies in Canberra on Friday, AUD/USD could slide again, perhaps back into the downtrend channel which marked 2018’s trade. 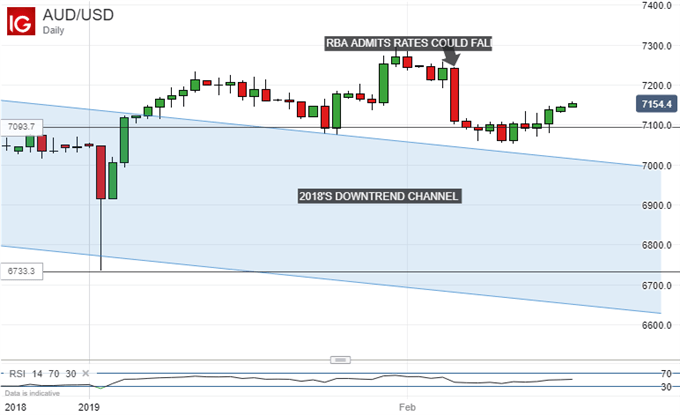 A similar view could be expressed via shorts in AUD/NZD, as the Australian Dollar seems more vulnerable to interest rate plays than its New Zealand brother.

Clear signs of trade rapprochement between the US and China could see growth assets like the Australian Dollar perk up, and this possibility represents probably the clearest near-term fundamental risk to this trade. So watch the headlines closely.