Australian Dollar Crushed. Did RBA Want Just That All Along?

The Australian Dollar crumbled last week on what at face value was a pretty humiliating few days for its central bank. But has the Reserve Bank of Australia actually played a weak hand rather impressively?

Admittedly this is not immediately obvious, to put matters at their mildest.

For one thing the RBA was moved to admit that the risk to current, record-low interest rates was finely balanced, and that they could indeed fall once more if economic conditions demand it. This was in broad contrast to its previous belief that the next move was likely to be a rise.

It also looked a little like capitulation to the futures markets, which had been moving to price in a lower Official Cash Rate for three months or so.

The Aussie was whacked on this news, only to fall further when the RBA revised its own forecasts for growth and inflation significantly lower later in the week. 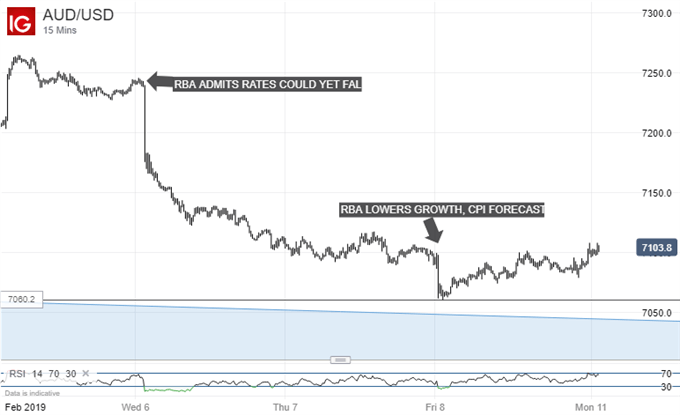 Alright, so you’re probably thinking that, so far, the RBA doesn’t exactly look like a strong bet for central bank of the year on the basis of any of this. What was smart about any of it?

Well, take a look at the timing. It’s interesting.

AUD/USD was boosted into 2019 by suspicions that the US Federal Reserve would be more cautious in raising interest rates than it had been before. This gave plenty of currencies a lift against the greenback, of course, and the Aussie was no exception.

However the RBA waited until the Fed had confirmed its caution, as Chair Jerome Powell did back at the start of this month. It also waited for the US-Dollar-weakening knee-jerk to die away before it went to work on the Aussie.

Bear in mind that the RBA could have confirmed a more balanced risk profile for Australian interest rates at any time it liked. Governor Philip Lowe can get to a microphone pretty much at will. What he says will be avidly reported.

But he chose to go at a time which would perhaps maximize the market impact.

There was also scrupulous avoidance of any reference to that futures market pricing before the fact. This created a level of ambiguity which may well have magnified the market effects of the RBA’s apparent capitulation last week.

One of the RBA’s biggest problems is that inflation remains very stubbornly below target. It has repeatedly stated that currency strength impedes its ability to meet that target, raising not a word of protest as AUD/USD headed inexorably lower last year.

What it has done now is to comprehensively crush a nascent bout of strength against a US Dollar which had lost some of its own interest rate support. It might also have done so rather cunningly, with no one so far breathing a single, critical word about currency manipulation. And indeed, why would they? The RBA’s actions seem eminently justifiable.

Of course, it may be that I am being too charitable, and that the RBA was simply caught off guard by events and forced to react. We will never know for certain but watch coming speeches and question and answer sessions. They may offer clues.

If the RBA decides to highlight once more the baleful effects of currency strength on inflation, that could be a sign that there was more co-ordination than collapse on view last week. Of course, there’s nothing at all bullish here for Australian Dollar investors, and it seems most likely that any retracement higher will simply offer short-sellers better opportunity.

It is possible too that the RBA might get to the end of this cycle without having raised interest rates at all, which could raise credibility doubts.

But that will be an investment problem for another day.

British Pound Back to Breakdown Levels as PM Doubles Down. Will GBP/USD go Lower?
Advertisement