How to Trade a Bearish Flag Pattern

The bear flag pattern is a popular price pattern used by technical traders within the financial markets to determine trend continuations. This article will explore bear flag trading opportunities, and will cover:

What is a bear flag?

A bear flag is a technical pattern that provides an extension/continuation to an existing downward trend. The bear flag formation is underlined from an initial strong directional move down, followed by a consolidation channel in an upwards direction (see image below). The strong move down is known as the ‘flagpole’ whilst the consolidation is referred to as the ‘flag’ itself. 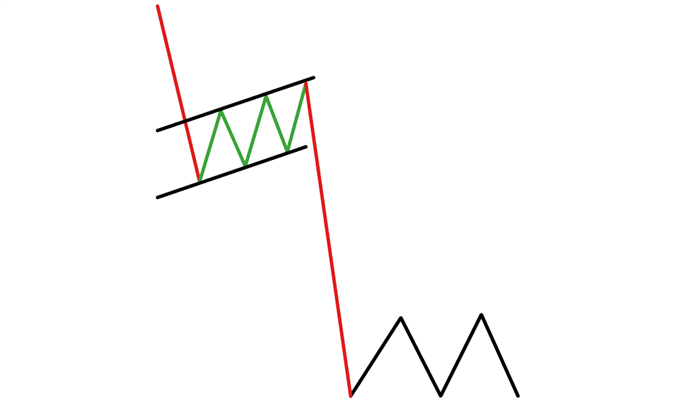 How to identify a Bearish Flag on Forex Charts

Identifying a bear flag can be easy once traders understand the components, and this is applicable to all financial markets, not just forex. The pattern itself is divided into three parts:

1. Traders will need to find the flag pole which will be identified as an initial decline. This decline can be steep or slowly sloping and will establish the basis for the trend.

2. The bear flag is identified as a period of consolidation after the completion of prices initial decline. During this period, prices may slowly channel upward and retrace a portion of the initial move. At this point traders will wait for price to break to lower lows in the direction of the trend.

3. After price begins to move lower again, traders can then find the final component needed for trading a bearish flag pattern. The profit target is a potential value to take profit after a currency pair’s next decline in price. This pricing level can be identified by first measuring the distance in pips of our initial decline. This value can then be subtracted from the peak resistance line formed from our consolidating flag. 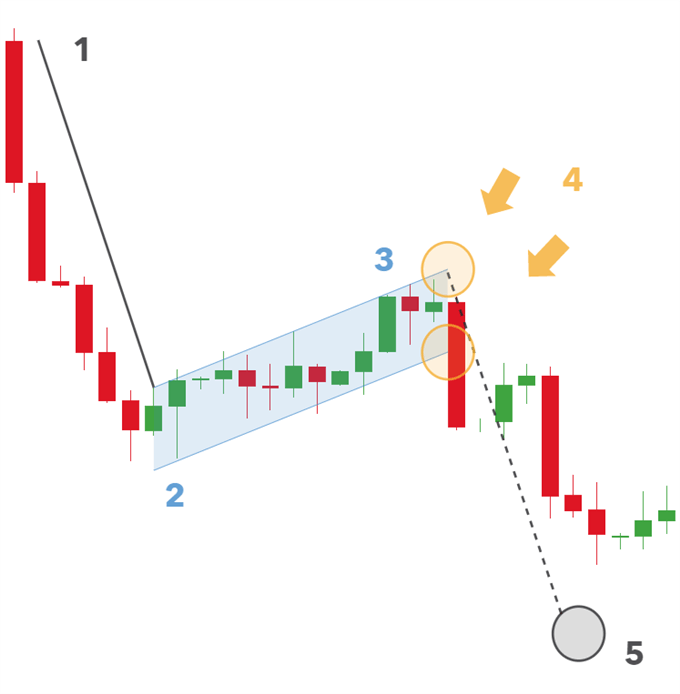 The following is an example of how to trade the bear flag pattern using forex charts. 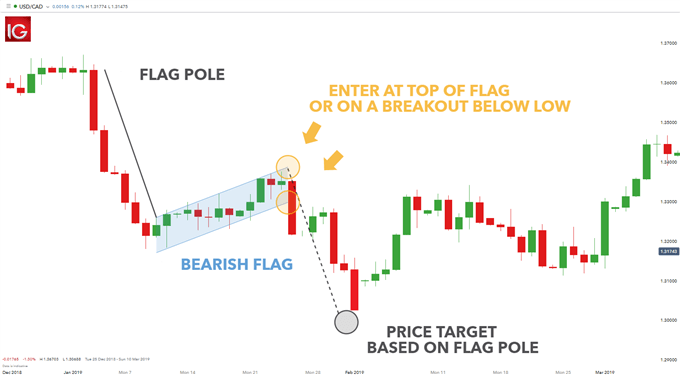 The chart above displays a bearish flag pattern being created on the USD/CADdaily chart. The flag pole has been established by connecting the January 3rd high at 1.36500 with the January 9th low at 1.31800. Totalling the difference between these points culminates in an initial decline of 470 pips. The consolidation phase of the move is highlighted by the blue channel.

As price gradually rises, the flag pattern slowly takes shape. It’s important to note that there is no established bearish flag pattern until price breaks out to lower lows of the channel. At that point, traders use the 470 pip (flag pole) initial decline to establish potential price targets near 1.30000.

In this example, price does not quite reach this level but this is purely a guideline. Trader’s need to be aware of price movements and other fundamental and technical moves that may occur throughout the trade journey.

How reliable is the Bear Flag?

The bear flag is regarded as an extremely reliable price pattern when all its unique formation features are adhered to. The table below identifies the advantages and limitations of the bear flag chart pattern:

The bear flag and bull flag represent the same chart pattern, however they are reflected in the opposite direction. Both bull and bear flag patterns entail a flagpole, consolidating price channel and a take profit projection measured from the length of the initial flagpole. Strategies for trading forex with bear and bull flags entail similar steps, but it is important to understand the bull flag pattern in its own layout as these patterns can be easily confused when taken out of context.

How do I know where to enter the trade with the bearish flag pattern?

The flag will trade upwards in a channel but the move to the downside is often revealed with successive lower highs and lower lows. Traders take note of Fibonacci levels, which are mathematically significant ratios that occur in nature and are often observed in financial markets. These levels are depicted using the Fibonacci retracement indicator and can assist traders in identifying entry levels where the "flag" could turn and continue in the current trend.

Bearish flag pattern or start of a bullish breakout?

Some traders fall into the trap of mistaking a bearish flag pattern for a bullish breakout. Bearish flag patterns tend to be gradual rises in price in a downward trend whereas breakouts often exhibit sharper moves to the upside. There are indicators to assist traders in spotting potential breakouts with one of these being the Donchian channel.