Bitcoin (BTC) or gold? For traders, the two are very different markets to focus on; Bitcoin is a peer-to-peer decentralized digital currency first ‘mined’ in 2009, while the precious metal gold, very much a tangible asset, has been highly valued for millennia.

Considering the key differences between Bitcoin, one of the major cryptocurrencies, and gold, enables traders to make informed decisions and capitalize on price movements. The main differences include volatility levels, storage procedure, and sources of demand.

There are similarities too, such as the scarcity of each – there can only be 21 million bitcoins, while there are around 180,000 tons of the major commodity gold in the world according to recent estimates. Other factors, such as Bitcoin and gold’s utility as currency, are disputed. Here we’ll look in more depth at the key differences people should consider to be ready to trade in Bitcoin or gold.

Top Differences Between Bitcoin and Gold

One of the most important differences between Bitcoin and gold is the volatility of the two assets. A useful measure of volatility is the average true range (ATR), which describes how much a market moves, on average, over a specified time. The ATRs used in the charts below are from 2016, with each circled portion giving the average range of price movementover the previous 14 days.

Bitcoin and Gold’s ATR as a Percentage of Price

The ATR for Bitcoin, expressed as a percentage of price, is shown to be a lot higher when compared to gold. Furthermore, the chart compares Bitcoin to gold when gold was volatile and Bitcoin experienced low volatility. Thus, we can conclude that, most of the time, Bitcoin tends to move further distances, creating more opportunities than gold.

Bitcoin vs Gold Volatility in Practice

Gold’s price has seen a much less volatile journey in recent years; since 2013 the price has held fairly consistently at around $1,225 ranging between $1050 and $1400 (as of November 2018). Indeed, in 2017, there wasn’t a single trading day during the year when gold ended more than 2.5% higher or lower than it had ended the previous day, an occurrence that hadn’t been seen since 1996.

A second difference between Bitcoin and gold is the way they are stored. As a physical asset, gold is stored in vaults, safety deposit boxes in banks and personal safes for smaller amounts. Bitcoins, on the other hand, cannot be stored in the traditional sense. Instead, what is stored is a secret number called a ‘private key’, which facilitates the transfer of Bitcoin from one party to another. Buying Bitcoin can be extremely risky if you do not make use of a hardware or software wallet to secure your private key.

There have already been a considerable number of hacks on Bitcoin exchanges that have resulted in up to four million coins being stolen to date (Fortune, 2017). Hacks can lead to a negative impact on the price of Bitcoin, but can also provide opportunities for short traders. This and other market events can be seen in the figure below, which highlights Bitcoin’s price sensitivity to market news and events relating to the cryptocurrency specifically. 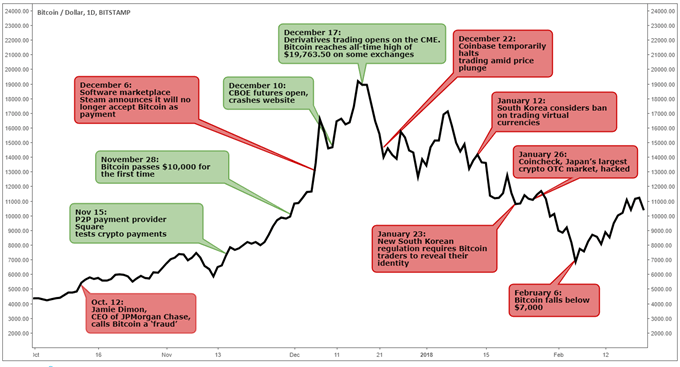 Gold, as an asset, has a 7,000-year history and its drivers of demand are easily identifiable, as can be seen in the chart below. The demand for Bitcoin on the other hand, is less clear and tends to centre around price speculation, buy-to-hold strategies and the underlying blockchain technology itself. 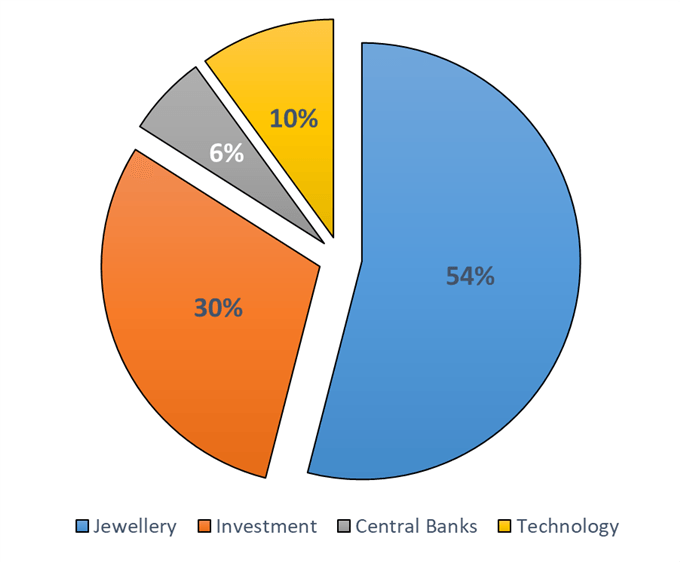 In addition to having easily identifiable sources of demand, gold tends to exhibit seasonality in its trading. Sales tend to increase in January, February, July and August when viewing average returns over a five to ten-year timespan, as can be seen in the chart below: 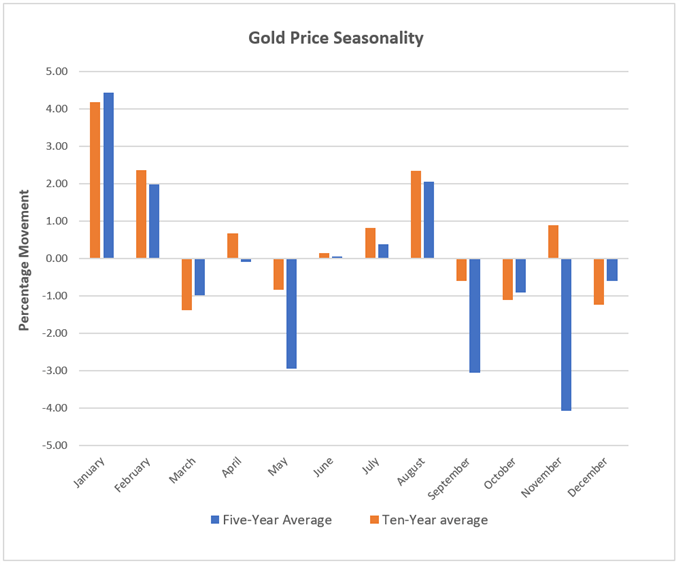 Recent gold prices have shown an increase in price in the first two months of the year to end off the Christmas and Chinese New Year periods. In China, gold is an integral part of Chinese New Year as locals use the precious metal to fashion zodiac symbols due to its investment value and aesthetic beauty.

The increase in price observed in July and August coincides with peak buying periods for jewelry, in particular, in India. This is because the country is one of the largest markets for gold as the commodity is widely regarded as a symbol of wealth, and plays a central part in weddings and religious rituals.

In addition to gold having easily identifiable sources of demand, it also presents the emergence of a pattern as to when that demand is likely to pick up throughout the year. By contrast, Bitcoin does not have such a well-defined source of demand and shows no indication of seasonality.

4. Bitcoin and Gold’s Utility as Currency

Bitcoin and gold’s utility as currency is the subject of some dispute. Economists often describe money as having three crucial functions that must all be satisfied: medium of exchange, unit of account and store of value.

Medium of exchange is the ability for something to be used as a currency to exchange for goods and services. While not widely accepted, this description fits Bitcoin; as of November 2018 organisations that accept the cryptocurrency include travel company CheapAir, gift card company Gyft, and US-based REEDS Jewelers, with many more showing interest.

However, gold is not often used as a medium of exchange in modern economies and it is not generally considered legal tender.

To satisfy the unit of account function, a potential currency must be ‘countable’ so that there is something to compare the cost of goods and services against. Unit of account is satisfied by Bitcoin due to the fact that the cryptocurrency is divisible. Most transactions will be fractions of a Bitcoin and these can go as far as eight decimal places.

Gold can also be used as a unit of account as it is also divisible (although less easily). Its value can be related to other goods through its value per ounce in a given currency.

Store of value refers to an asset that can be set aside for future use. As it can be used in the future, it is believed to hold value overtime, as opposed to perishable goods such as milk, which is a poor store of value due to its propensity to spoil.

Sceptics of Bitcoin argue that the cryptocurrency has no value and is merely worth what the next person is prepared to pay for it. Some also believe that the fact that you cannot physically touch it is consequential when ascertaining its store of value.

In conclusion, it can be argued that while Bitcoin has been used as a medium of exchange, neither Bitcoin nor gold meet all three functions necessary to be considered ‘money’ and therefore neither fully satisfies a utility as currency.

How do the Differences Between Bitcoin and Gold Affect Traders?

The differences between Bitcoin and gold can affect traders in a variety of ways. Different market conditions, for example volatility and liquidity, mean that trading providers often have different stop and limit spacing requirements, margin requirements, and bid/ask spreads. Sensitivity to news and position sizing are also relevant factors to consider when trading these two markets in particular.

Stop and limit spacing: Though it is possible to day trade bitcoin and gold, there are thresholds that must be maintained for the distance placement on stops and limit orders. Stop loss and take-profit levels will generally be wider for Bitcoin than for gold due to Bitcoin’s increased volatility. Day traders commonly use the average true range to assist them in determining where to set these orders.

Margin requirements: Margin requirements set by the broker will typically be higher for bitcoin compared to gold because BTC is more volatile, so traders should consider this when deciding how much leverage to use.

Bid/Ask spread: Volatile markets tend to experience wider spreads and the same is true for Bitcoin versus gold. The spread for BTC is significantly larger than that of gold as Bitcoin is significantly more volatile. The increased spread represents an increased transaction cost so a Bitcoin trader will need to factor that into their trades. 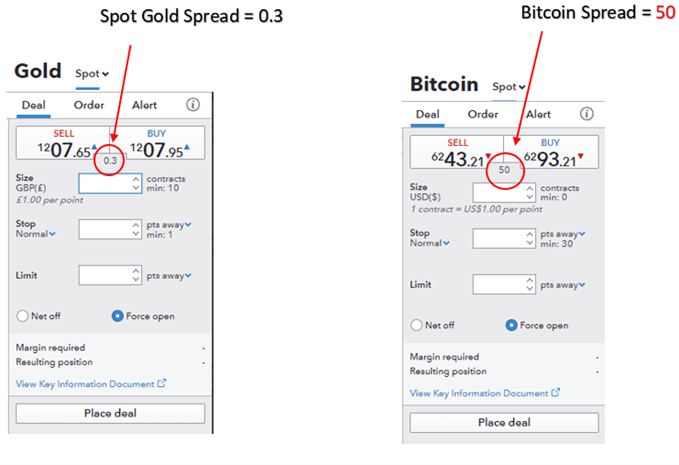 Sensitivity to news: BTC is very responsive to market news so traders should always stay up to date with news releases from our Bitcoin page. Since cryptocurrencies are a relatively new market, news about their adoption among exchanges, banks, and regulation tend to have a dramatic impact. Gold will also react to news but its price tends to move at a slower rate than bitcoin. Gold prices tend to move in relation to global news events as risk appetite increases and wanes.

Position sizing: At DailyFX, we talk about risking less than 5% of your account value on all open trades at any point in time. Having this disciplined approach is particularly important when trading BTC in case the market moves against you. Traders that adopt this approach are better equipped to absorb losses without jeopardising their trading accounts.

Bitcoin and gold share few similarities, so their differences are not to be overlooked, particularly from a trading point of view. Gold is still regarded as a safe haven, while Bitcoin is renowned for being a particularly volatile asset. Greater volatility brings with it a need for greater risk management in the form of position sizing and well-defined stop and take-profit levels.

If you are looking to start day trading gold or Bitcoin, you may be interested in:

Will Bitcoin Ever Replace Gold?

Bitcoin and gold are very different assets. The cryptocurrency can’t replace gold as a precious physical asset as it isn’t a tangible commodity, while its volatility means it is unlikely to replace gold as a safe haven.

What Other Resources can I use When Trading Bitcoin or Gold?

When trading Bitcoin or gold, traders use a combination of technical and fundamental analysis. Past price action and upcoming economic releases, when used together, can assist traders to make informed trades. For analysis and updates on Bitcoin and other major markets, register for one of our webinars.