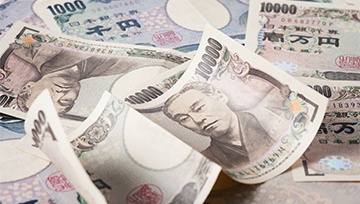 The past three months have seen a significant rally in favor of the Japanese Yen. However, much of this move was a correction to a much larger bear trend (bull trend if you’re referencing a pair like USDJPY) and/or was motivated by the moderation of counter-currency rate backdrop. While there is traditional economic performance considerations and other relative influences to the Yen’s rise and fall over time, the largest influence over time has been around the currency’s role as a ‘funding currency’ in a carry trade capacity. For those uninitiated to the FX strategy – wouldn’t be a surprise given the decade of zero rates we have only recently climbed out of – the carry trade is a strategy employed where one is short a low yielding currency (or more often an asset priced in said currency) and long a higher yielding currency. On the roll each day (typically), the difference of the representative rates is earned.

And, after the sizable rate hikes we have had over the past year, there is actually yield to speak of. That said, volatility in the underlying exchange rate can quickly offset the steady returns if the market moves against that carry. That is what has happened these past three months. From the October 21st multi-decade intraday-high, USDJPY has dropped nearly -16 percent. Interestingly, in this time, general risk appetite has improved which could bolster carry trade appetite; but the plateau of rate forecasts from the likes of the very recent – and nascent – shift in perception for the BOJ has been effectively counteracting that pressure. 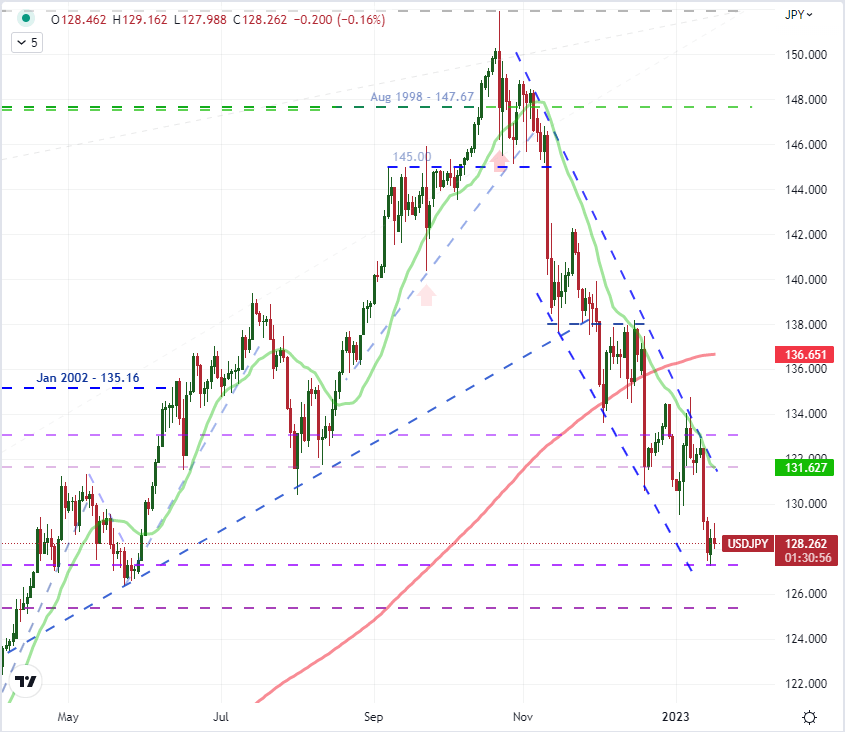 At the BOJ’s December policy meeting, the central bank surprised the markets when it announced that it had increased the band that it targeted for the 10-year Japanese Government Bond (JGB) yield. At the end of the day, that is still an extremely dovish policy stance compared to other policy groups. It goes well beyond maintaining a zero interest rate policy. Nevertheless, after decades of ‘near zero’ and most changes coming with further loosening, even a modest shift towards tightening like this stands out. What’s more, given the use of this very liquid currency as a carry foundation, small changes in favorable gaps will be pronounced in the FX market. Last week, a report ran in one of the country’s largest newspapers to suggest officials would be discussing the side effects of extremely accommodative monetary policy – which would be interpreted by many as justification to express intent for further tightening moving forward. Is that enough to justify a further recovery for the Yen? With risk trends on unclear footing as well, there isn’t a clear equilibrium to be assessed in market standings. 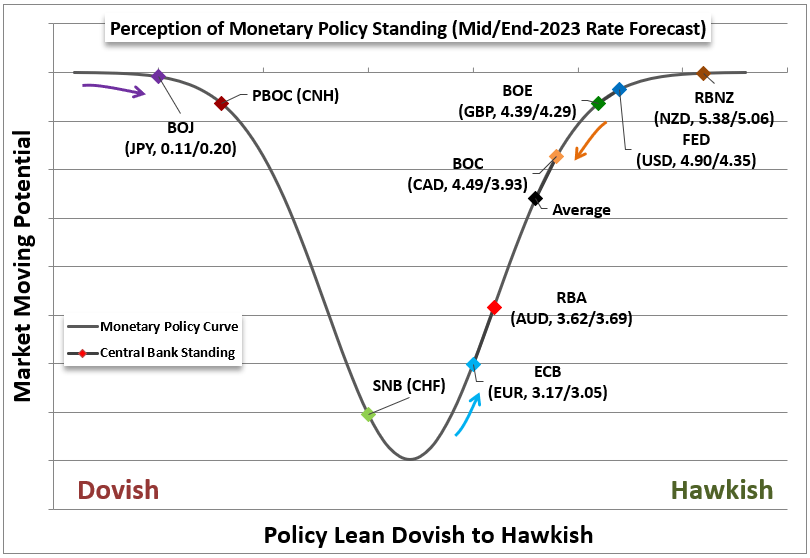 Despite the ambiguity of the situation, the markets are extremely charged in their expectations for the potential impact of the BOJ rate decision. Looking to implied (expected) volatility measures behind USDJPY, we find that the anticipation for activity overnight is the highest we have seen for this pair July 28th, 2016 – which coincided with the announcement of a 6 trillion stimulus package to support the Japanese economy. There was exceptional ‘realized’ volatility around the time, but most traders will hone in on the larger turn through the end of 2016. These are not the same conditions today as they were back then, but it is probable that expected volatility will settle after the event passes. The question is whether the ‘relief’ will present in a directional way. If the BOJ falls back into its stoic reassurance of extreme easing with no perceived in, it could very well charge a directional response to match volatility. 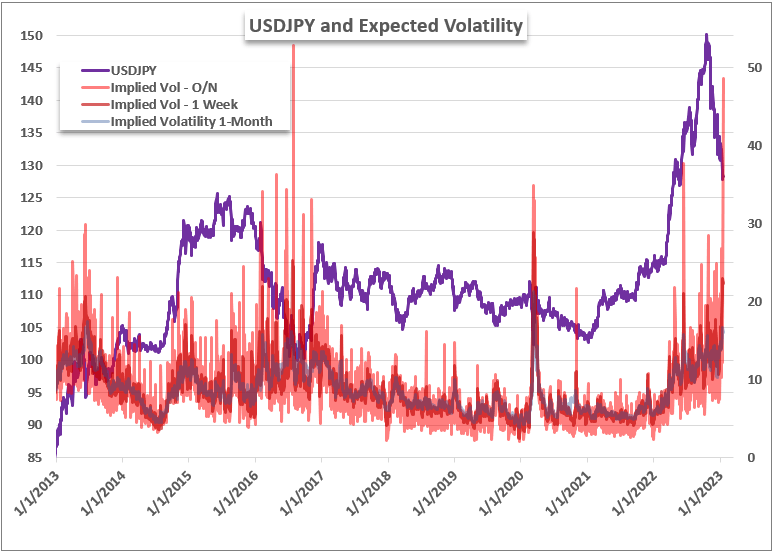 While the top even for Yen cross movement ahead is Japanese-specific, it is important to remember that it is the context that will channel any significant movement for the market. Turning away from the USDJPY, another remarkable cross has been the CADJPY. Similar to the AUDJPY or NZDJPY, this is considered one of the more traditional carry crosses amongst the majors. And yet, those pairs have seen much more choppy retreats without a clear conviction in favor of reversal. CADJPY’s slide has been much more consistent. That is likely due in part to the lead the BOC policy drive initially held for tightening and then its earlier plateau in forecasts. What is more important now is the higher expectations for a Bank of Canada rate cut/s through the end of the year, which is higher than most of its counterparts. So, not only is the Yen closing the carry gap, but the ‘carry currency’ itself is expected to accelerate that premium burn. 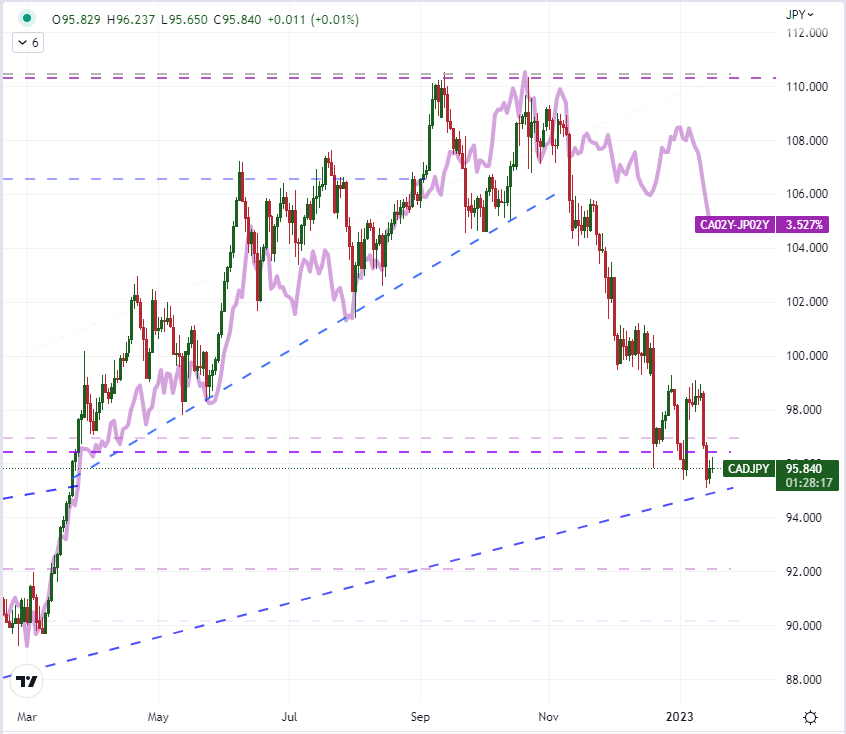