There was some frustrating stop-and-go in the markets this past week, leaving both bulls and bears uncertain of the market’s bearings through the end of this past week. To be sure, the height in volatility through the past period seemed to favor ‘risk appetite’ and lean hard against the US Dollar based on a focus around monetary policy – particularly from the United States. That said, the uneven response to the Fed’s favorite inflation indicator (the PCE deflator) and a response that could be construed as ‘concern’ following the better-than-expected November nonfarm payrolls figures indicates that conviction is not settled for the coming week. Finding some measure of momentum was important moving into the coming week as there will be no small measure of ‘anticipation’ hanging over the market. The last, high-level salvo of global macro event risk for the year will come over the week of December 12th through the 16th.

So, while we may be facing volatility in this interim period, the scope of the swings we may ultimately see could be artificially truncated. As a stand in for risk assets, the S&P 500’s technical picture reflects the situation well. The benchmark US index managed to clear its exceptionally tight 12-day range this past week and further go on to overtake the 200-day simple moving average (SMA) for the first time since April. Yet, follow through all but died when we hit the midpoint of the 2022 range and the extension of lower highs through the same period setting a trendline right around 4,100. We may see a break from the tight range of that collective resistance and the 200 SMA now as support (around 4,050), but the extension on such an event really depends on the motivation. 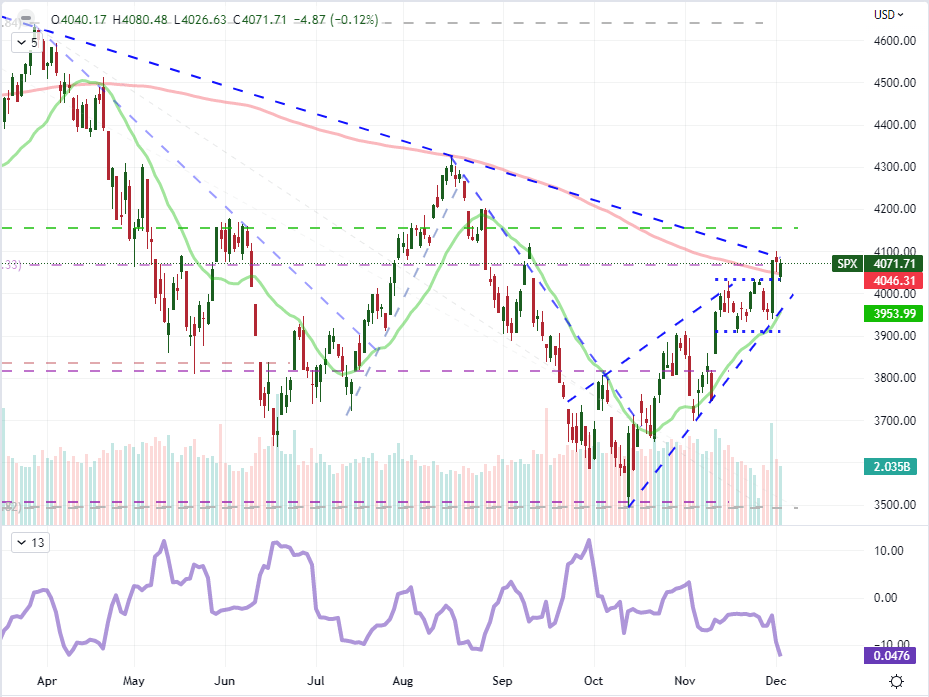 Taking a look at what is on offer through this coming week, we don’t have a lot of critical event risk that could tap into the productive theme of this past week: the monetary policy outlook for the top central banks. As such, either the market will meander fundamentally or attention will shift to another systemic priority. One matter that is of great consequence for financial markets yet is still viewed as too abstract to take the reigns on market sentiment is the threat of a global economic recession. The warnings have been made and various indicators (eg the 2-10 Treasury yield spread) and indicators (eg the monthly PMIs) suggest we may already have entered the treacherous waters, but the fear doesn’t seem to have spread to the market. There will be a few sparks to possible catch that fire this week, however, including the ISM’s US service sector activity report due on Monday. Reflecting upon the largest collective group for output in the world’s largest economy, it could be a scalable proxy for broader GDP potential.

Alternatively, growth figures will further coming from China (PMIs), the Eurozone (EZ retail sales and German industrial production) and Australia (the 3Q GDP reading) among others; but these regions will struggle to infect sentiment for the global economy. Meanwhile, there will be some more contained monetary policy event risk to monitor this week. The Reserve Bank of Australia (RBA) is up first on Tuesday morning expected to deliver a 25 basis point hike to 3.10 percent which would be a deceleration well below some of its more liquid peers – such as the Fed – which could undermine its carry appeal in any ‘risk on’ phases heading into 2023. The Bank of Canada (BOC) rate decision Thursday sees more significant debate between a 25 bp or 50 bp hike to the current 3.75 percent benchmark. 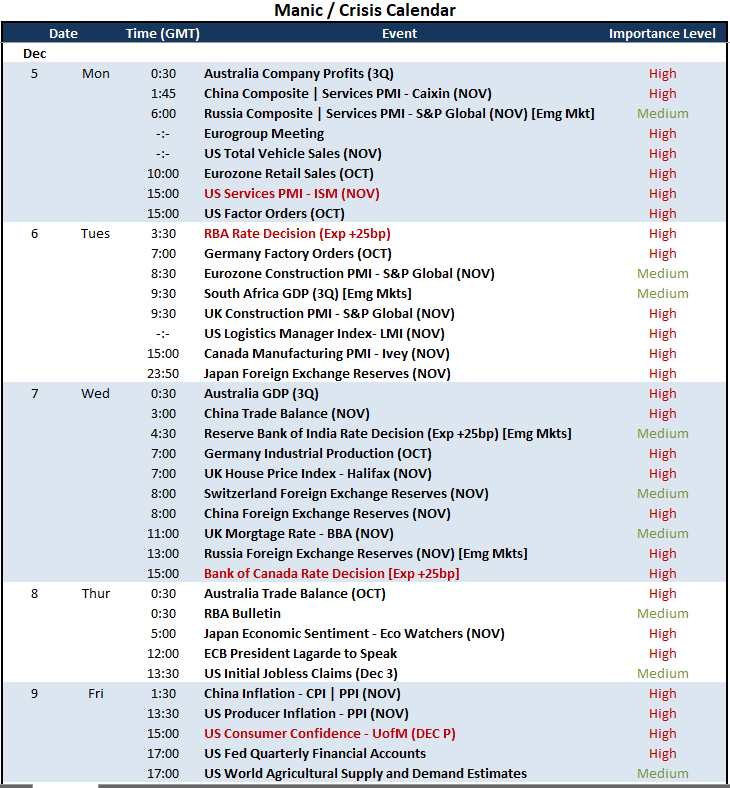 Something that I’ve been mentioning regularly these past weeks that should be considered again this year is that there remains significant capacity for the markets to experience a significant charge in volatility through the month of December. That can be difficult to imagine when you see the VIX slipping below 20 this past week, but there is a dense run of high-importance event risk the week after next. We have seen unexpected swells in 2018 (almost through the end of the year), 2020 and 2021. Last year, the jump happened in the 49th week of the year. We are entering the 49th week and I believe which would make it the period before the fireworks. Yet, the concept that activity can be stirred should be seen as a real possibility. 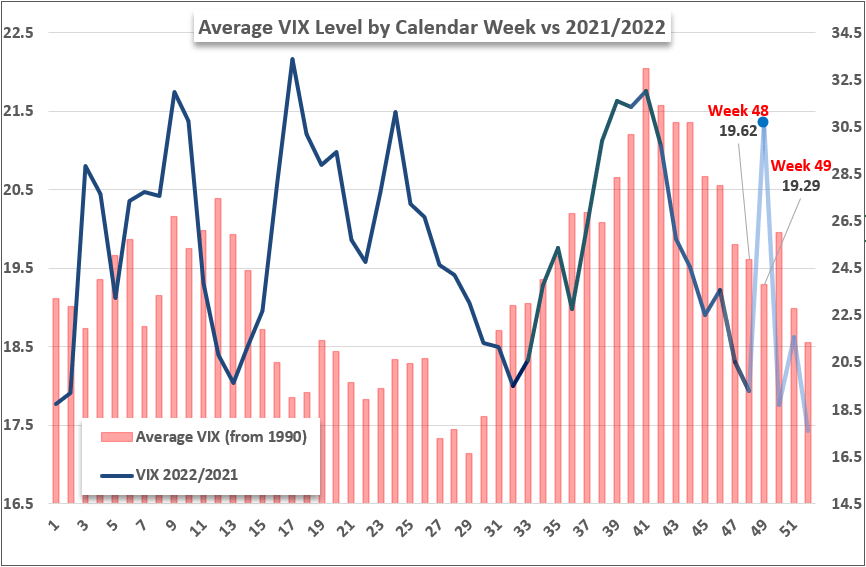 Meanwhile, as we track the ebb and flow around the absolute view of risk appetite, it is worth monitoring the progress of relative valuations across assets and regions. In particular, the Dollar’s position in the FX market is under some intense scrutiny at the moment. These past few months have seen a significant turn from the DXY Dollar Index’s multi-decade highs to a few critical technical breaks lower which may transition from a mere bleed off in momentum to a possible full-blown reversal of trend. However, committing to such a prolific move as this one will take a significant degree of conviction which may prove a struggle given the time of the year for which we are in. Nevertheless, the interest rate advantage the Greenback has sported through this hawkish phase of global monetary policy, the restraint against recession risks and uneven demand for US assets on the risk spectrum (high yield in complacent times or absolute haven in panic) have ebbed. Though the DXY is below its 200-day SMA, there are still some critical levels for major pairs like USDJPY and EURUSD ahead which could add a little more speculative fervor to activity should we break or bounce this week. 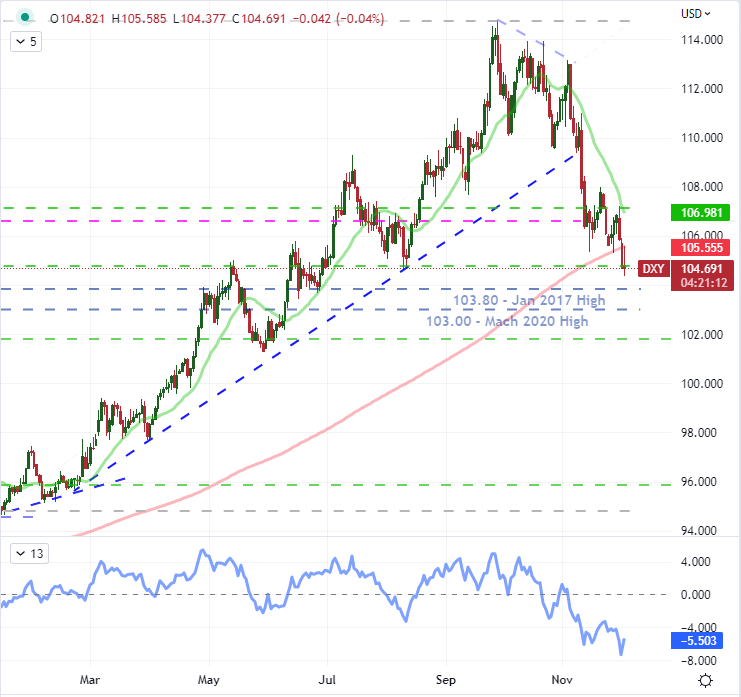