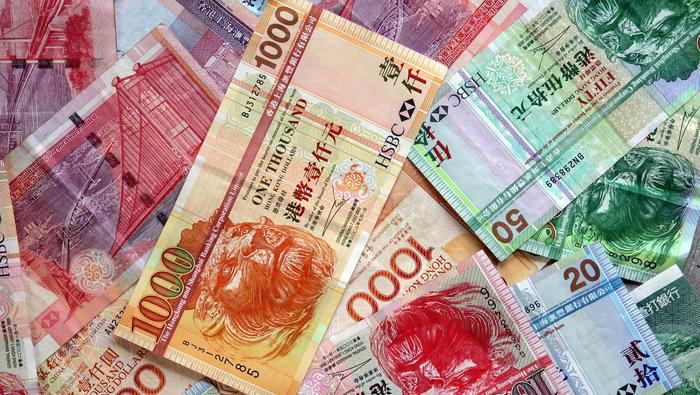 The Hong Kong Dollar is among many currencies falling hard to its US rival as mounting global crises have burnished the Greenback’s popularity. With the US Federal Reserve in the midst of its most forceful program of interest-rate rises for a generation – far ahead of anyone else’s – it’s not hard to see why its currency is winning the popular vote.

After an admittedly shaky start, the Fed appears willing and able to act more forcibly against resurgent inflation than any other major central bank. The US also enjoys mastery of its own commodity and energy supply chains to an extent unmatched by competitors. As Europe rues its reliance on Russian oil and gas and looks miserably to a chill winter, this US trump card further boosts the Dollar’s appeal. However, the Hong Kong Dollar is of course pegged to the US unit, adding a fascinating twist to this currency pair. We take a look at the peg, its history and future in light of this year’s trading action. 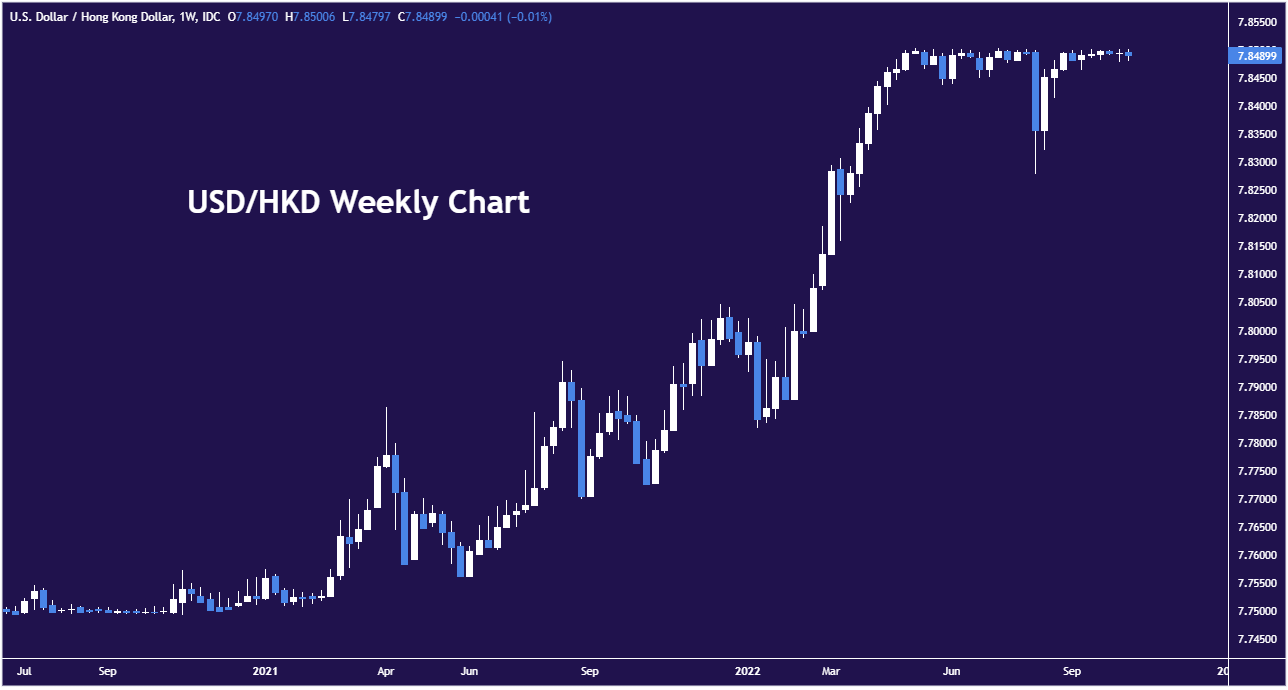 What is the USD/HKD Peg?

The peg was originally a device for restoring confidence in the Hong Kong Dollar after a period of depreciation way back in 1983. The Hong Kong Monetary Authority (HKMA) had seen its currency slide to the point where a US Dollar bought more than nine of its Hong Kong counterparts, from around six at the start of the year. Faced with shaky confidence in local banks, and indeed public unrest, USD/HKD was pegged at 7.80, with the pair then permitted to trade between 7.75 and 7.85 since 2005.

Via a ‘linked-exchange system’, if USD/HKD rises to 7.86, the HKMA will buy Hong Kong Dollars from local bank reserves. This in turn causes a reduction in onshore banking liquidity and a rise in interest rates which attracts capital back to Hong Kong, boosting USD/HKD.

The design of the peg means that this is the major instrument of exchange rate control. The HKMA changes local interest rates in step with the US Federal Reserve, effectively abandoning its discretion to adjust monetary policy in response to changing economic conditions.

Lack of Independence is the Problem Now

What the current peg defense means is that local interest rates are rising at a time when, all else being equal, the economy would cry out for the stimulation of lower borrowing costs.

Hong Kong has been hit hard by both China’s “zero Covid” quarantine policies and by Beijing’s clampdown on the freedoms supposedly guaranteed to Hong Kong after it was returned to Chinese rule in 1997.

The city has long been a tourist magnet but the prospect of long, rigidly enforced Covid quarantine and the reality of a visibly more oppressive local regime has understandably seen visitor numbers collapse.

Indeed, the Hong Kong Tourist Board reported a 97.4% drop in visitors last year, with little improvement expected in 2022 despite some relaxation of quarantine rules.

With numbers like these it’s not surprising that overall economic growth should sputter. The economy contracted by an annualized 1.3% in the second quarter of 2022, after sliding by 3.9% in the first.

These are not obviously conditions under which lending rates ought to be going up. However, under the territory’s currency rules, rise they must.

There’s some modest relief for borrowers in that local retail banks have so far not increased their own rates by much, but it seems all-but certain that they will, should base rates continue to rise. And this will be a problem. As Hong Kong’s Financial Secretary Paul Chan reportedly said back in July, “continuous rate hikes are disadvantageous for economic recovery.”

Still, Hong Kong Will Have to Bear It

Disadvantageous they certainly are, but there may be very little to be done about them now. Hong Kong is hardly the only jurisdiction in which unwelcome interest rate rises have been imposed. Global inflation’s surge has put more-or-less every major economy in a similar position.

The Hong Kong Dollar’s peg is the basis of financial stability in the territory. A stable currency is vital for an open economy like Hong Kong where international trade and maritime logistics are key business drivers. The currency appeals as safe and convertible (indeed it’s usually in the top ten of globally traded units) and is the bedrock of Hong Kong’s status as a financial center.

These concerns are likely to win out over short-term economic pain as they have for the peg’s entire 40-year history.

The Peg is Still Highly Credible

The peg enjoys enormous credibility within the foreign exchange market. Chan said back in July that the city’s “huge” foreign exchange reserves would be enough to defend it. They amount to around $440 billion dollars, with, presumably, Beijing’s multi-trillion-dollar reserves standing behind them.

Which brings us to China’s attitude, which is probably all-important.

Beijing seems content to let Hong Kong keep its place as China’s “window” onto international capital markets. That means keeping the Hong Kong Dollar’s link with the US Dollar. The latter is freely convertible in a way that the Yuan still isn’t. As a result, it plays a role in global trade that the Chinese currency’s proponents can still only dream about. The Greenback is also the pre-eminent global reserve currency and set to remain so. China is simply not about to concede enough control over its own currency to the whims of the global market.

That means Hong Kong will be better off with the US Dollar on the other side of its currency regime. For as long as Beijing agrees, the peg will endure.