Gold has spent the majority of the week trying to recover Monday’s steep decline as positive news from China and a weaker dollar helped the precious metal. The $1800 handle has proved somewhat of a stumbling block this week as the precious metal struggled to find acceptance above the key level.

The dollar has largely struggled which could be down to seasonality as the greenback has a history of poor performance in December. US data however continues to demonstrate the robustness of the US economy as Friday’s PPI data beat estimates. The weakness in the greenback coupled with the positive Covid news from China helped gold recover early week losses to trade relatively flat as the weekend approaches.

THE FOMC MEETING AND US INFLATION DATA

Given the recent batch of data out of the US, the chances for a higher peak Fed funds rate have increased. Since the September meeting Fed policymakers have reiterated their belief that despite smaller rate hikes, we are likely to end up with a higher peak rate than previously indicated.

Markets do however seem resigned to the fact that next week’s FOMC meeting will result in a 50bps hike with the potential for a hawkish message. Markets are currently pricing in a 74.7% probability of a 50bps hike next week. Friday’s PPI print hints at the potential of a higher inflation print for November which will be released on Tuesday. Should inflation jump higher following October’s decline this would no doubt add a further layer of intrigue to Wednesday’s interest rate decision. The market reaction following October’s inflation data has seen the dollar struggle and US Treasury yields fall which does not bode well for the Fed in its fight against inflation.

Irrespective of next week’s inflation print I think we will most likely see a hawkish statement from the FED which could prop up the US dollar following recent weakness and in turn, keep gold below the $1800 handle. 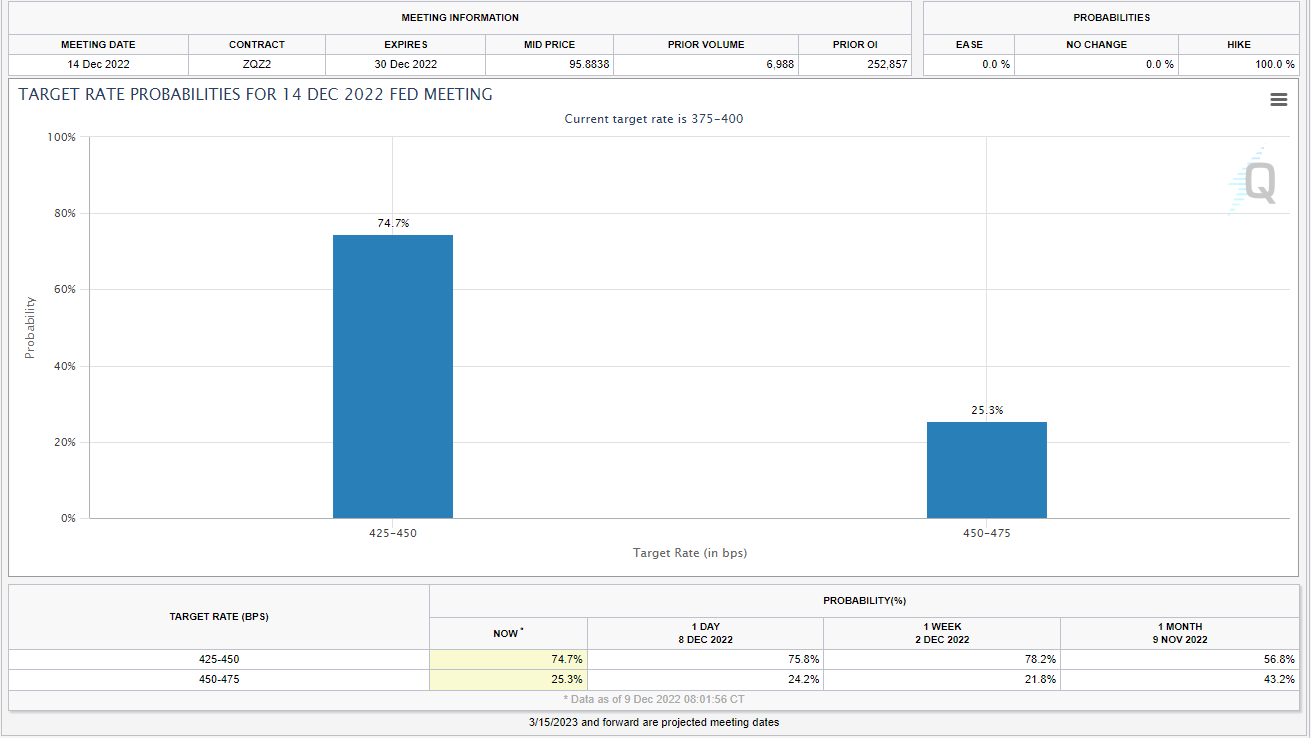 US ECONOMIC CALENDAR FOR THE WEEK AHEAD

Here are the three high ‘rated’ events for the week ahead on the economic calendar:

Technically Gold has struggled to gain any acceptance above the 200-day MA while remaining within the wedge formation. A weekly candle close below the $1800 level will see gold print a doji candlestick close which seems apt given the jampacked data in the week ahead. Price action currently hints at a new leg to the upside, while the potential golden cross forming backs up the potential for further gains. However, given the data next week there remains a chance that we see a shift and break the wedge pattern to the downside bringing support at $1730 and potentially the 50 and 100-day MA into play.

Potential scenarios for gold rest on the nature of the FOMC decision next week with a 50bps hike unlikely to see extreme dollar strength given the majority of that might be priced in. However, should a 50bps hike be accompanied by a hawkish statement as well as a higher Fed funds peak rate we could see a resurgence in the US dollar pushing gold further away from its multi-month highs around the $1800 level.