After the kind of activity that we were faced with through the end of last week with the Thanksgiving holiday drain, any modest pick up in volatility would be highlighted. That’s what we saw this past session as the S&P 500 gapped modestly lower on the open and proceeded to stretch its overall losses on the session to -1.5 percent. That increases the tally of one percent or greater declines on a daily session to once again match the bearish progress of 2008. There was also a fundamental beacon for market participants to gather around and justify the downshift: the growing protests in major Chinese cities over crushing covid lockdowns. However, despite the clear narrative and significant-enough market movement, the S&P 500 would still not leave the comfort of the range it has scoped over the past 10 trading days (equivalent to two weeks). At this point, the 11-day historical range as a percentage of spot is equivalent to 3.2 percent – the smallest trading span since November 24th of last year. The average true range (a measure of realized volatility) is the lowest since January of this year. In other words, we have yet to break the volatility and liquidity seal. 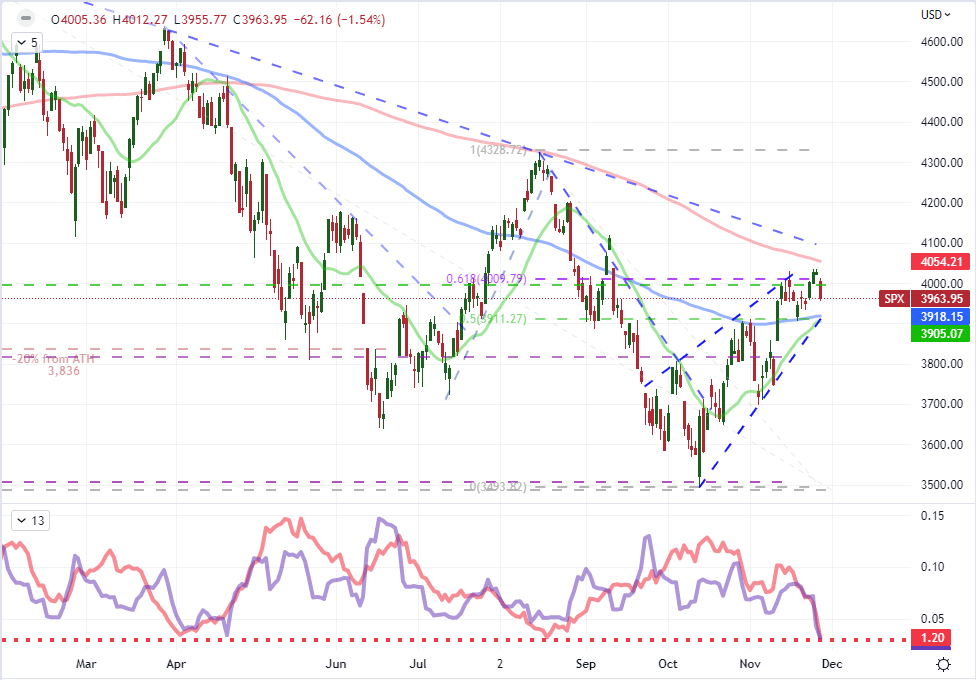 If we are looking for a fundamental jumpstart to reengage the post-holiday liquidity conditions, we are likely going to have to find it from somewhere other than China. The reports out of the world’s second largest economy were indeed significant. The pushback from the populace against President Xi Jinping’s policies is the greatest we have seen since he came to his role at the head of the country. That creates considerable uncertainty not just for China itself. Back in 2008 when much of the world fell into the spiral of recession, China very notably managed to avoid severe contraction and in turn helped moor the global recovery that followed. The threat that this represents, however, is moderated by the practicality of the control the government has over conditions in China. It is likely that the government quells these uprisings and the economic drain the ‘zero covid’ policy exerts on its economic health will be more modest and exaggerated over time. That said, it is worth keeping tabs on USDCNH – even if you are (reasonably) skeptical over the level of the Shanghai Composite. 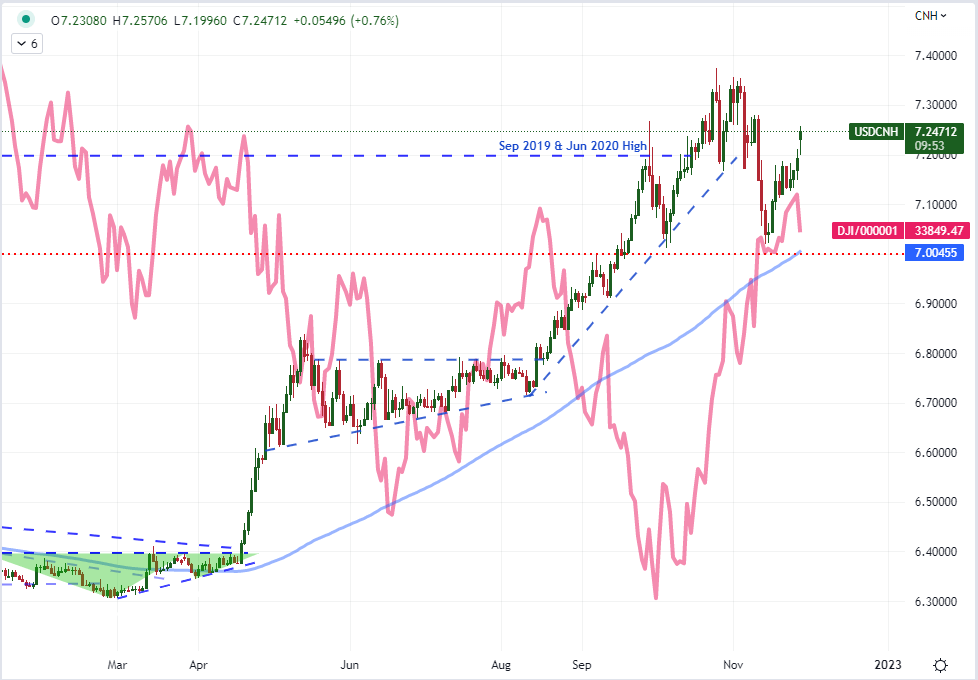 If we are looking for genuine fundamental inspiration, no need to look much further than the upcoming session’s economic dock. We have heavy hitting event risk on tap for major economies – and it is looking to intensify as the week goes on. In particular, the themes of monetary policy forecasting and recession risks are two of the most prominent themes on tap. While there is both an official GDP offering from Switzerland and Canada ahead, I believe the US consumer confidence report from Conference Board and the Eurozone sentiment surveys for November are the bigger reflections of major economies. Add to that the following session the fact that we have the Chinese government PMIs and some key US employment data; and there is serious heft here. That said, monetary policy looks to be the greater lift in ahead. Form the Eurozone, we are expecting both the consumer inflation expectations report for November and Germany’s official CPI release. Though we are not due the US PCE deflator (the Fed’s favorite inflation report) until Thursday, the Fed-speak we are digesting this week is critical considering it is the lead up before the media blackout that precedes the next FOMC rate decision (December 14th). 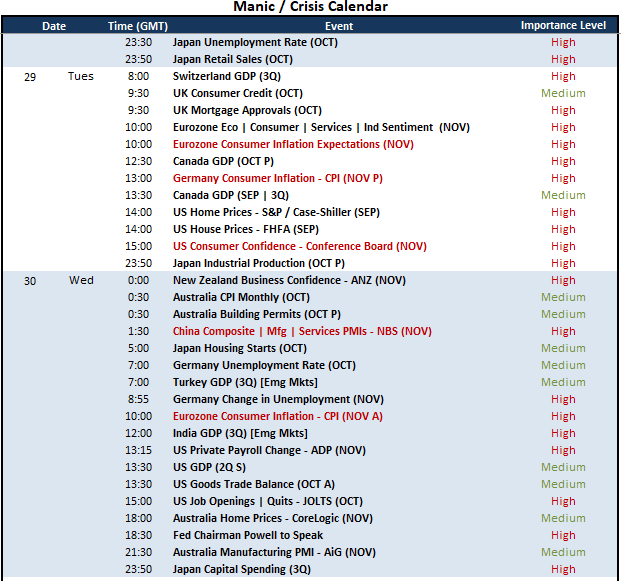 Given the push and pull of US interest rate expectations, I will be particularly focused on EURUSD. This past session, ECB President Lagarde offered a soft warning that inflation may not have topped in the Eurozone and it could surprise to the upside. Meanwhile, from the Fed, there is a much more concerted effort to signal to the market that the flight path for Fed rate hikes out into 2023 is likely higher than what the market has accounted for. What’s more, they continue to push back against expectations for rate cuts at any point in the year. With EURUSD failing a second time to take 1.0500 – amid a sharp reversal on the season – this is a fundamentally primed market to watch. 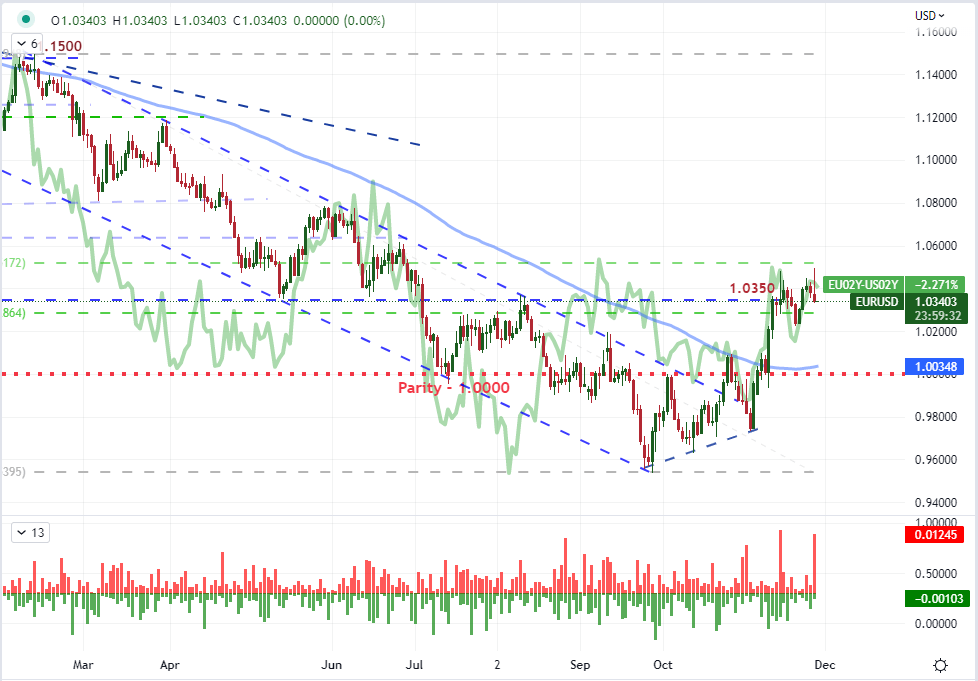