Crude oil prices are extending overnight gains, fostered by a softer US Dollar and implications of a possible pullback in global production levels. West Texas Intermediate (WTI) prices rose 5.21% on Monday, bringing the benchmark to its highest level since September 22. Brent crude prices increased around 4%, although the global benchmark hasn’t made as much relative progress against WTI.

A potential production cut may be announced this week when the Organization of the Petroleum Exporting Countries (OPEC) and its allies, collectively known as OPEC+, meets in Vienna. Speculation is swirling, with production cut estimates ranging from 500,000 to 1,000,000 barrels per day. Reuters, citing sources familiar, suggests that Moscow is keen to see a cut towards the upper end of that range. Realistically, a 500k barrel cut seems more likely as the cartel may want to gauge the market’s reaction before the smaller cut, and Russia’s political motives likely come secondary to other members.

Oil prices fell in June, July, August, and September as markets started to price in recession fears predicated on rising global interest rates. The Reserve Bank of Australia (RBA) and the Reserve Bank of New Zealand (RBNZ) are on tap to announce rate decisions this week, with both central banks widely expected to hike. Meanwhile, the Federal Reserve has solidified its hawkish stance over the past few weeks, which pushed major US stock indexes to fresh 2022 lows just last week.

According to the latest Commitments of Traders report (COT) from the CFTC, non-commercial WTI traders reduced their long exposure by 8,655 while shorts increased exposure by 5,143 for the week ending September 28. That reduced net speculative longs to +226,080—which remains near the lowest level since 2015. Both longs and shorts have reduced their bets this year. However, the trend in decreasing long positioning started before shorts reversed, which increased starting in May, around a month before prices peaked in June at 123.66.

Those trends are important to watch in the coming weeks, and the potential for a short-covering rally should also be considered. Upcoming inventory data out of the United States is also in focus, as it usually is. The American Petroleum Institute (API) and the Energy Information Administration (EIA) are set to report stock data for the week ending September 30. Analysts expect the EIA report to show a build of nearly 2 million barrels, although distillate and gasoline stocks are expected to shrink. 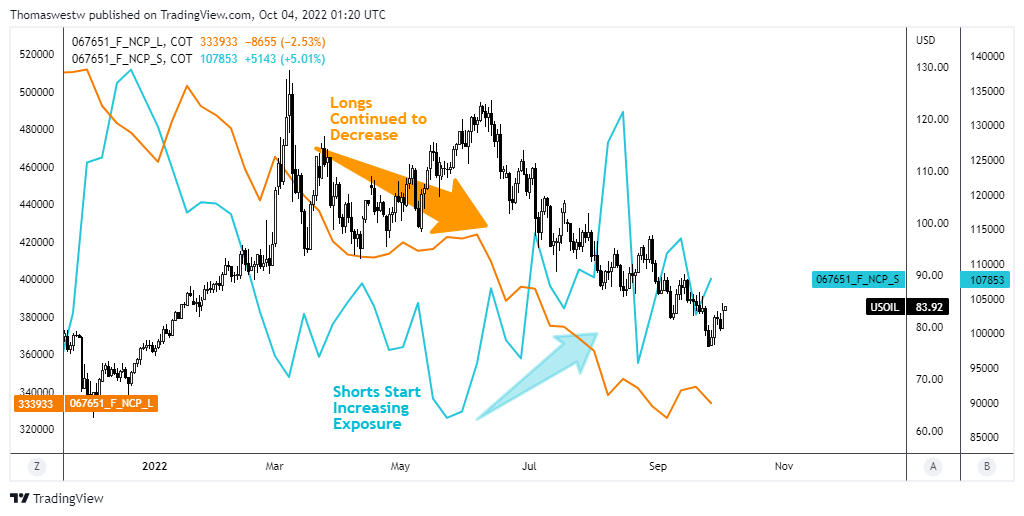