See how retail traders are positioning in EURUSD, USDCHF, USDJPY and other Dollar-based majorsusing the DailyFX speculative positioning data on the sentiment page.

The Fed Signals Its Support

Between Fed Chairman Jerome Powell's testimony before the House and the minutes from the Federal Reserve's last monetary policy meeting, it was clear that the world's largest central bank was signaling to the markets its intent to move forward after its dovish course correction. In the central bank leader's remarks, he would say that this past Friday's NFPs changed nothing in the group's assessment of trouble ahead and that the so-called progress on trade discussions with China offered little assurance to negate the necessity of external support. In the minutes, reference to "many" seeing a stronger case for a cut seemed to deepen conviction that a rate cut is impending. The probability of a July cut already at 100 percent according to Fed Fund futures is now seen as increasingly warranting a steeper first cut while the outlook for a third cut (or 75 bps) through year's end is on the rise again. 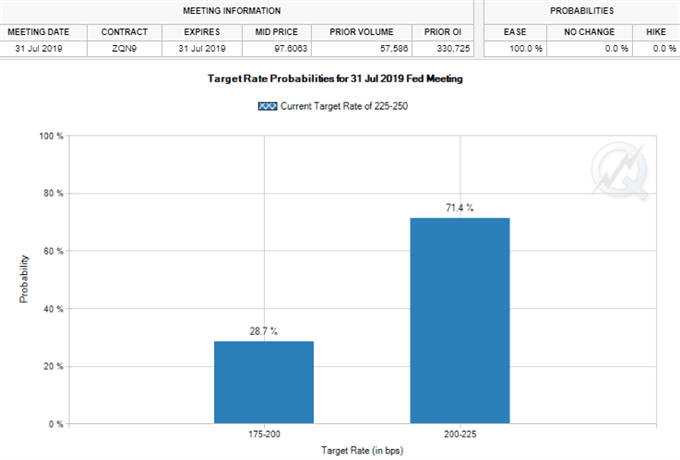 There are various implications to the world's largest central bank committing to a reversal in its course to normalize from an extreme accommodation built up this past decade. One of the most prominent considerations is what this does for risk trends. It is not a coincidence that speculative assets have soared since the Great Financial Crisis ended - particulary US indices - despite a flagging backdrop for economic performance. The familiarity of a charge in risk trends owing to a source of external support is a comforting one to many. And yet, it is also increasingly unreliable. While indices like the S&P 500 and Dow jumped Wednesday in response to the news, there remains a distinctly scattered performance among the many risk-leaning assets. The support of a stretched resource like monetary policy authorities affords far less conviction now than it has in years past. 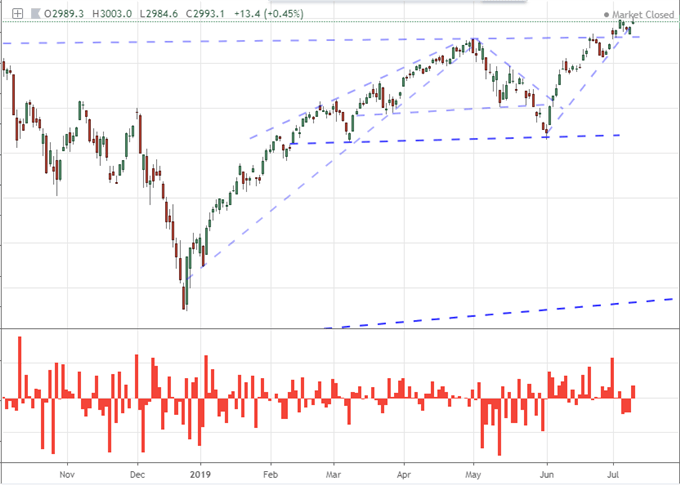 As we look to gauge the impact that the Fed's policy influence can reasonably exert over the market, there are two principle elements for which we can account. For the competitive appeal of the US Dollar relative to its major counterparts for yield (the equivalency of a dividend in the FX world), the most liquid currency holds a significant premium to the most liquid counterparts. There is little doubt that a diminished rate forecast will hurt the currency's standing for yield advantage. Another critical aspect of a reversal in policy bearing is the implications for general risk trends. Recent history has paid considerable premium to dovish monetary policy adjustments, but there are certainly questions as to how much further lift can be leveraged from increasingly ineffective efforts. A good comparison as to which wind carries the greatest influence is USDJPY's performance. As risk trends improve, all Yen pairs (as carry representatives) tend to advance. Yet, as yield potential from the Fed diminishes, the Dollar drops. How did the USDJPY fair this past session? It posted an abrupt reversal from 109. 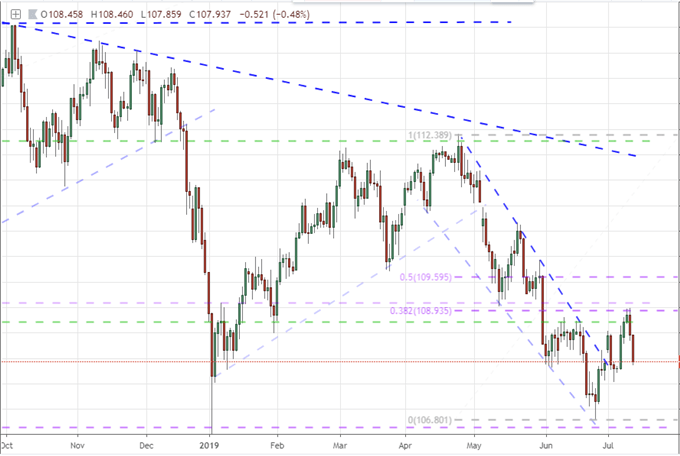 Another asset that drills down into the particulars of the financial market's response to both the Fed's intent and the general implications of global monetary policy on sentiment is gold. The precious metal is typically considered a safe haven. If we wanted to look at its historical performance more closely, severe capital market distress and/or inflation pressures tend to amplify its appeal. Yet, there is a new facet that has come to prominence over the past decade for the commodity and it is the commodity's appeal as a harbor to financial stability that tends to devalue sovereign assets such as currencies or government bonds. We are leaning more heavily on that latter role nowadays. Therefore, it is very telling this past session that gold charged higher this past session to put yet another test to the 1420/40 resistance that we have established on a wide range this past month. We focus on key measures to this week's top theme and event risk in today's Quick Take video. 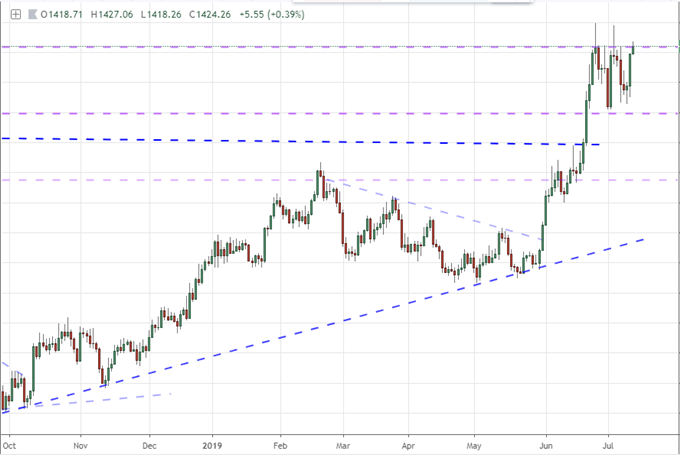