The Japanese Yen has begun to gain again on the US Dollar once more, with the Federal Reserve’s apparent willingness to keep interest rate cuts on the table, despite last week’s good news from the labor market, providing the fundamental backdrop for this latest bout of Greenback weakness.

Technically, USDJPY’s short-term daily chart bias would appear to be to the downside too, if not quite conclusively yet. The pair is flirting with a break of a quite well-respected uptrend line which has so far market the bounce seen from the effective 2019 lows reached in late June. 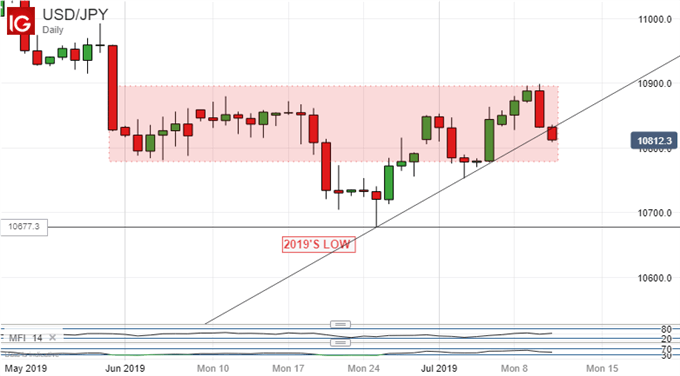 Clearly a daily or weekly close below that line looks highly likely at this point and, unless Dollar bulls can reassert themselves, the base of the current trading range looks set for a revisit. That comes in at 108.80 and its hard to see any conclusive falls below that failing to retest the year’s low, probably quite quickly.

The range top at 108.98 provides those Dollar bulls with their most obvious upside target, but they would probably need to consolidate in that region before they could dare to dream of retaking all of the sharp falls seen on May 31. The pair would need to rise back to 109.60 if it is to fully erase them. That looks like a tall order.

A rather similar situation appears to be playing out in GBPJPY, although in that case the bias lower seems more obvious.

It’s difficult to discern how much current trading action is merely pass-through from pairs such as USDJPY and EURGBP and how much stems from the UK’s fundamental, home-grown Brexit and associated political turmoil.

In any case, GBPJPY is already back to its effective lows for the year, if the sudden, quickly corrected fall of January 2 is discounted.

The cross has been headed lower since making its highs for the year so far back in March. The current downtrend channel is a little shallower in gradient than its predecessor but no less persistent for that. A sustained slide from current levels could see its base face another retest. That comes in at 133.77.